by agrifood
in Farming
Reading Time: 5 mins read
A A
0
Home Farming
Share on FacebookShare on Twitter


“Forget it. Just throw them in the garbage,” I said to my husband Chris who was standing in front of me with a huge plastic bin meant for Christmas ornaments; only there was no holiday cheer inside this bin. Instead, it was filled with almost a hundred bills in various states of distress. Some were ripped open and others were torn as if subject to a scornful and rapid glance. Some were untouched altogether. I thought it was a joke. It was not a joke.

“I didn’t think you’d want to know about this,” he said.

Unfortunately, our plummeting financial situation wasn’t the only complication we were facing. Two months before, we had been strolling around New York City when I felt a sharp pain in my lower belly. I was four months pregnant and thought I had overdone it. We immediately headed home to our Hudson Valley farmhouse. When I called my doctor’s office, the nurse said not to worry but to come in the next day. After a quick examination, I was rushed to an emergency sonogram, which showed that I had three monster fibroids growing in my uterus, and one was pressing against my cervix causing early effacement. I was told that I would be lucky if my baby made it to 24 weeks. The doctor’s directive: five months of strict bed rest.

We had recently moved into a rickety old farmhouse in desperate need of repairs, had just dumped every cent we owned into purchasing a tractor shop and I was suddenly in jeopardy of losing my baby. With the doctor’s pronouncement, I lost my autonomy, my career and my financial stability. My mind swirled with worrying thoughts. How would I keep my child alive? How would we keep the farm going? And most important, would our marriage survive the strain?

Now, with this giant bin of bills sitting on the edge of my bed, I immediately went to work budgeting, negotiating payments and cutting unnecessary expenses. That was the easy part. We still needed a plan for the homestead.

Cricket Hill was an old dairy farm that had been in my husband’s family for generations. We no longer had cows, but we did have acres of fields filled with flowers and vegetables—including an asparagus patch that was legendary for being one of the biggest and oldest around—not to mention more than 1,000 Christmas tree saplings that needed tending. With me horizontal and my husband at our new tractor shop upward of 12 hours a day, neither of us would have the ability to weed, mow, brush hog or turn over the beds. 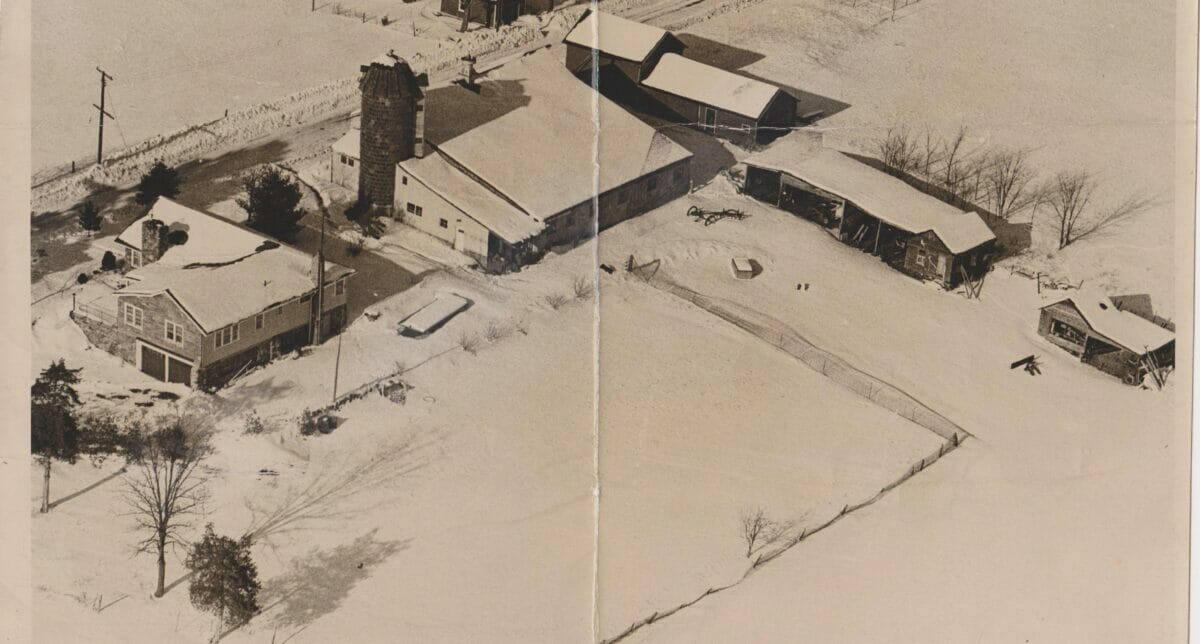 Built at the turn of the 19th century, with few repairs made since then, the farmhouse was in dire need of renovations, especially with a new baby on the way. Let me pause here to explain what I mean by dire. Not long after our wedding, Chris was working in the basement when something, he’s not sure what, made him look up. In place of a supporting beam, he found the skeleton of a 1954 Chevy holding up the house. Unfortunately, the Chevy was rotting. We spent our first $12,000 as a married couple making sure our home remained standing.

That was only one of many issues, most of which had yet to be addressed. Because the old septic system was so sensitive, the washing machine had never been hooked up to a drain. Instead, the washing machine hose was placed in an old garbage can, which filled twice each cycle. To make sure the basement didn’t flood with soapy water, someone had to bail the water out with buckets, and then traverse a six-acre field to empty them over a steep cliff into the woods. This might be a good time to mention that I’m a city girl from Brooklyn whose entire experience with laundry was putting a few quarters into a machine at the corner laundromat. I was out of my comfort zone the very moment I stepped foot on this farm, and now on bed rest, I felt useless and even more unsettled.

As the weeds continued to grow (and the neighbors made comments about how we had let the place go), our bank account hit rock bottom, and the bills spiraled out of control. We unsuccessfully tried to keep up with the repairs and renovations. Something had to give. It was our marriage. One evening, my husband walked in the door, headed directly to the bathroom and vomited from the stress. Then he drank a glass of water and went right back to work. We were both consumed with anxiety and, although we wanted to be there for one another, we just didn’t know how.

It was long past time we began to work together to prioritize. The weeds would stay the season. We would cut the asparagus patch in half. We let our other crops go to seed early with plans to start over the following year. Chris, who was doing most of the renovations himself, finally agreed to hire help, but that brought its own set of issues. Chris’s grandfather’s creative homegrown fixes continued to provide expensive surprises, like the odd-sized broken front door frame that didn’t fit a standard-size door, driving the handyman to rage quit and leave behind tools on the front lawn in a rainstorm. With no other choice, we continued to confront each obstacle as it presented itself, sometimes more gracefully than others.

As the long days of bed rest turned into months, we learned that farming, marriage and babies require a lot of patience and nurturing to thrive. Neglect any of these and the consequences are disastrous. I tried to understand and acknowledge old family traditions, and Chris tried to integrate new ones—like modern plumbing. We learned how to let go and hold on at the same time. We learned that nothing ever goes as planned. We learned that when you plant a seed and finally see the fruits of your labor—whether on the farm or from the hospital where I gave birth to a healthy baby boy—the joy is immeasurable.

Parts of this essay have been adapted from Knocked Down: A High-Risk Memoir (March 1, University of Nebraska Press).

Aileen Weintraub is the author of Knocked Down: A High-Risk Memoir, a laugh-out-loud story about farm life, marriage, motherhood and the risks we take. She has written for the Washington Post, Glamour, NBC and AARP among others.  Find her on Twitter @aileenweintraub.

With smart ear tags, no more need to wait until the cows come home

Watcher! The 2020s are quickly turning into a carbon copy of the 1970s, and farming friends have commented that I seem sharper mentally, stand a little taller and...

Organic farming experts are being sought by Defra to advise the four UK governments on future policy in this sector. The Expert Group on Organic Production (EGOP) will...

Industry leaders have given a mixed reaction to unconfirmed reports that Defra is considering the launch of an area payments scheme that would pay all landowners in England...

Pig producers in England and Wales have endured seven successive quarters of negative margins, and cumulative losses are estimated at £600m since autumn 2020, AHDB figures show. The...

They were once the preserve of big, open grain fields in Australia, Canada, and the United States, but ultra-wide headers...