With the Agriseeder drill from Erth Engineering listed for the first time, this year’s Ultimate Guide to disc coulter seed drills reflects an even bigger choice of machines for single-pass establishment of grains and oilseeds, companion and cover crops, and grass leys.

With the burgeoning use of cover crops to build soil fertility and organic matter, and the ability of discs to work effectively with large volumes of surface vegetation, this type of drill is increasingly popular.

Hydraulic auto contour control is a feature of the Agriseeder from Erth Engineering, in Northern Ireland, which is designed to achieve consistent coulter pressure and seeding depth over undulating ground.

Primarily targeting grass leys, fodder cropping and cover crops, the 3m and 4m implements have two rows of notched disc openers, each set at an angle to the direction of travel with a disc-cleaning seed coulter alongside.

They are mounted in eight-disc sections on pivoting frames, with interconnected hydraulic cylinders to generate even downforce and seeding depth across the working width.

Buyers can go with the standard 400-litre frame-mounted hopper, or the 1,000-litre option for greater productivity and when wanting to apply fertiliser at the same time.

There is also scope to add a 70-litre secondary hopper for applying micro fertilisers, small seeds and slug pellets, applied either down the spout, broadcast to the surface or placed separately via twin-outlet coulters. 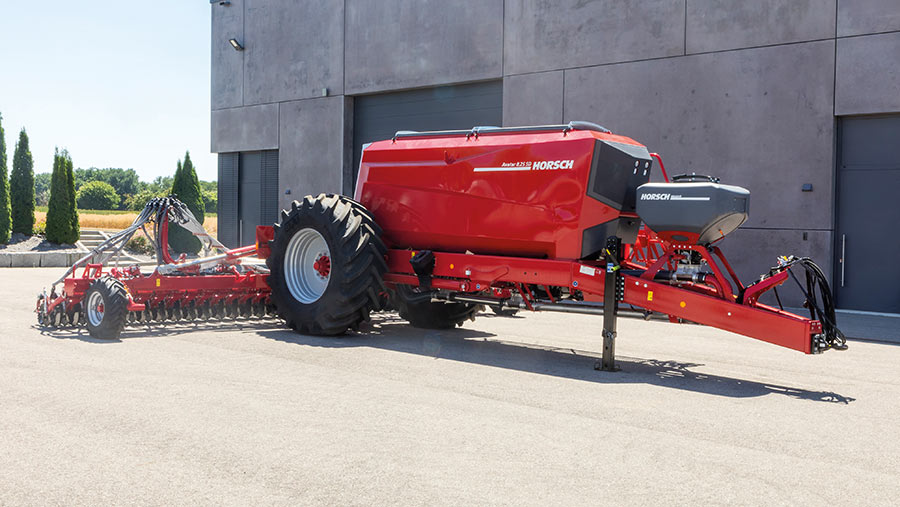 Like the biggest drill in the line-up, the 8m, 9m and 10m models come with a large hopper – 6,400 litres in this case – in either triple-compartment form as standard, or double-compartment as an option.

This seed and fertiliser configuration can also be used for seed-only sowing.

A toolbar is mounted to the rear carrying one inline row of SingleDisc coulters spaced 250mm apart.

This contrasts with the 3m to 8m sizes that have 167mm coulter spacing across two rows and a hopper mounted overhead. 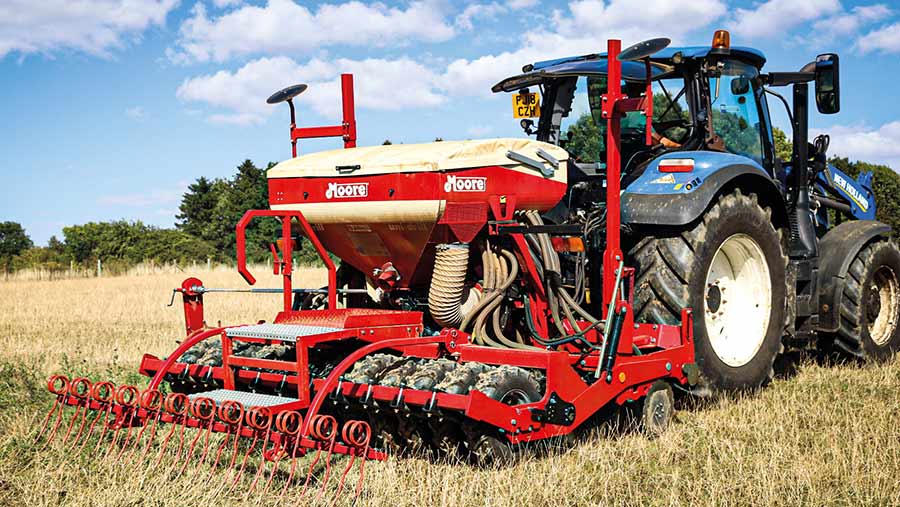 The Moore Uni-drill disc no-till seeder range has been expanded by a wider mounted version that delivers extra output on larger tractors.

This 3.4m working-width machine also introduces an 850-litre hopper that now features on other models, increasing seed capacity from 700 litres on the 3m mounted and trailed versions.

These are mounted in pairs on a trailing arm with rubber inserts for the arm-mounting clamp allowing vertical movement, while providing up to 120kg pressure – up from 94kg for improved capability in hard soils. 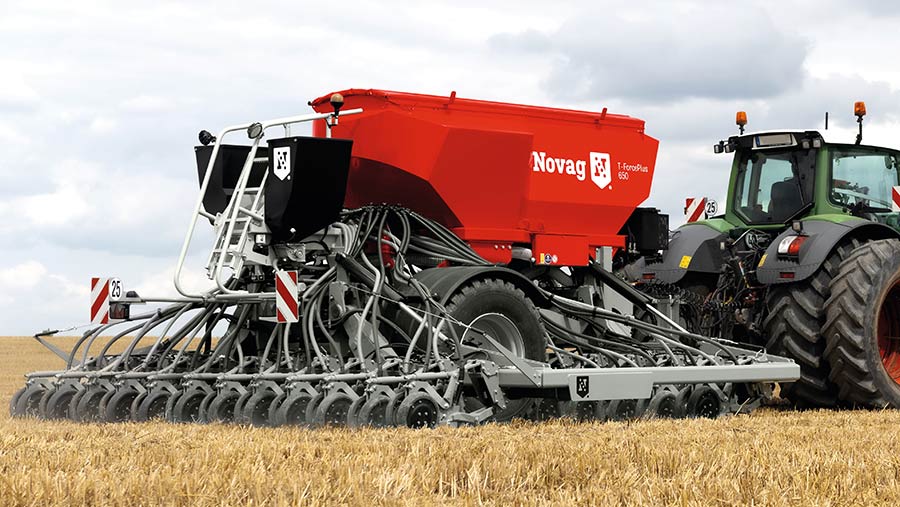 Novag has added 8m and 10m sizes to the T-ForcePlus drill range.© Novag

A recent newcomer to UK no-till drill market from France, Novag has expanded its range of trailed T-ForcePlus disc coulter seeders with 8m and 10m sizes, as well as a smaller 2.5m model that joins the diminutive 2.25m machine.

All versions can deliver fertiliser placed alongside seed from separate L-shaped blades that form an inverted T- slot, with a 575mm scalloped-disc opener positioned between them.

Individual hydraulic cylinders can apply up to 500kg of downward pressure to the coulters for consistent penetration, with automatic adjustment dependent upon soil-resistance measurement.

Penetration depth is regulated by a pair of V-angled rubber press wheels behind the disc opener.

A wider working mounted drill has been added to the Weaving GD drill line-up, which features a twin-disc opener assembly set 25deg from vertical to lift a “flap” of soil with seed placed underneath rather than a vertical slot.

The 4m GD 4000M complements the 3m version for growers with a big enough tractor, and uses the 166mm row spacing common throughout the range.

In contrast, the 6.4m trailed model, in both seed-only and combi configurations has been dropped, leaving the 6m and 8m versions at the top of the line-up.