The Tillage-Live event returned to its triennial haunt of Dunbar, East Lothian, last month, giving farmers in the area the chance to see the latest drills and cultivators in action.

Here are some of the highlights.

One of the biggest updates for the new machines is the switch to a vertical folding system, enabling operators to lower the back wheels and reverse neatly into field corners.

This is not possible on the existing machines, as the roller is always on the ground, making it difficult to back up without blocking up.

Unlike the older variants, the newcomers come with three roller options – a single or double steel roller, or a double soil-to-soil press for use on lighter land.

There is also a trio of options when it comes to soil-working components. At the front, buyers can pick from a cross-board, cross-cutter knife or straw harrow.

In terms of discs, there’s the firm’s standard 450, the Truecut 470, and the cross-cutter, which is for shallow work to a depth of about 3cm.

The maker says the various updates and options make it one of its most versatile and customisable machines to date for tillage and seed-bed preparation.

Production will start on 1 October. 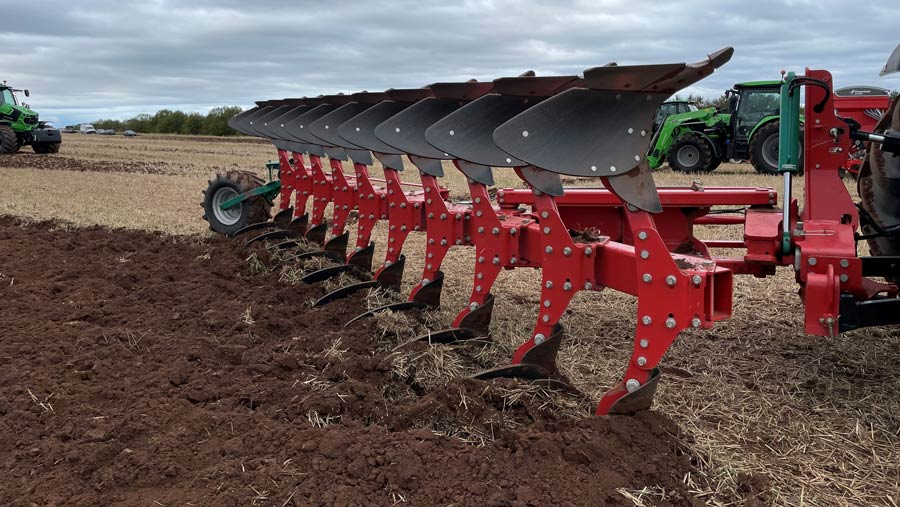 Kverneland’s next generation of Ecomat on-land ploughs made their UK debut at Tillage.

Designed to be a halfway house between a cultivator and a plough, the implement works at a shallow depth to reduce the amount of disturbance through the soil profile.

The Ecomat’s 10 furrows can be operated at depths from 6cm to 18cm, with mechanically adjustable widths that can be set between 30cm and 50cm. This gives overall working widths from 3m to 5m.

Like many other Kverneland models, the Ecomat benefits from the maker’s Trailer Transport System (TTS), which allows the plough to be towed like a trailer for road transport, improving safety when turning in and out of field gates and following winding roads. 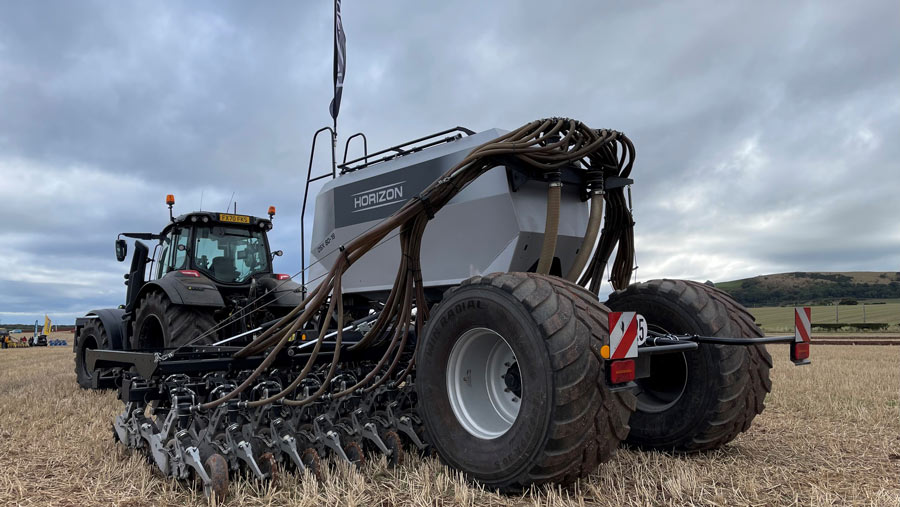 The latest version of the machine, which has been on the market for about three years, is designed for sowing directly into stubbles, though it can also be used on cultivated ground.

It comes as standard with a twin hopper for seed and fertiliser, although an optional third can be fitted in the middle to carry products such as grass seed or slug pellets. With two tanks the split is  60/40 and with three it is 60/10/30.

In terms of options, buyers can include row cleaners on the front, which comprise a serrated disc on each coulter to peel away any surface trash so that the sowing disc does not have to contend with it, minimising the risk of hair-pinning. Tyre sizes on the trailing wheels are also customisable.

Working speed is typically between 8kph and 12kph, with the sweet spot apparently in the middle, around 10kph. Machines are available in sizes ranging from 4m to 9m. 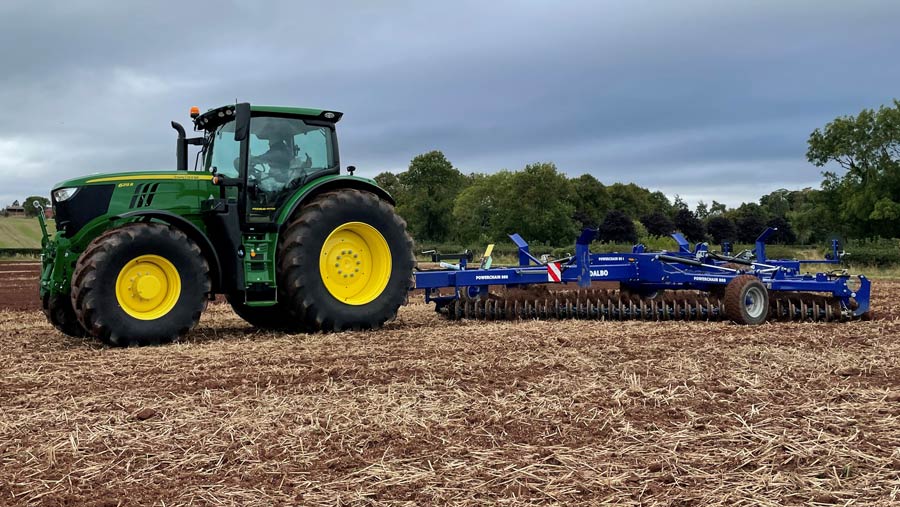 In the works for three years and finally launched in February, Dalbo’s 8m Powerchain disc cultivator was on show for the first time in Scotland.

Already proving popular in the south, the diamond-shaped configuration comprises four disc chains, each of which is fitted with between 31 and 35 discs that sit at a 40deg angle. This equates to 132 discs strung across the full working width, which can be used to shake up maize stubble and cultivated land.

The front disc chains are angled inwards to move soil to the middle, while the rear discs face the opposite direction, levelling the soil and distributing it back out. This design is not a new concept, having already proved popular in Australia and North America – albeit with machines from different brands.

In dry conditions like those seen this summer, weights can be added to ensure the discs are digging into the soil adequately and getting a full cut across the working width.

A central platform can house an optional seeding unit, which comes in hopper capacities ranging from 300 to 500 litres. This allows for cultivation and the sowing of cover crops in the same pass.

The 8m implement goes into full production next year, and is currently the only option available. However, the Danish maker has confirmed that a 12m version, as well as a smaller model, are in the pipeline. 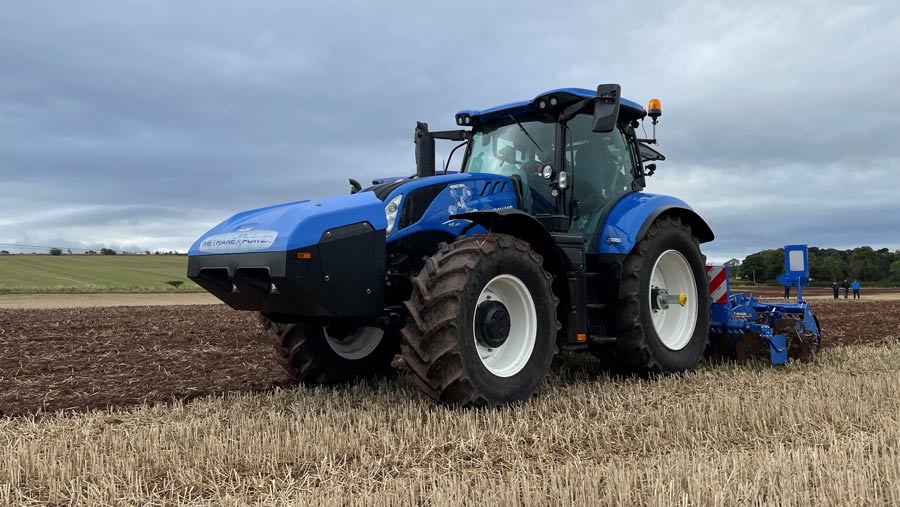 The tractor runs on compressed natural gas and has only slight differences in terms of engine setup compared with its diesel counterpart.

These include spark plugs in place of ejectors and, due to the engine’s slightly higher running temperature, a water jacket that sits around the engine. It’s also significantly quieter than its more conventional cousins, and has no need for AdBlue.

Variations aside, the maker says it runs exactly like a diesel tractor, with like-for-like, if not slightly better, performance.

An additional tank is mounted to the front of the machine to serve as a range extender for additional fuel carrying capacity. In some cases, running the tractor can actually be a carbon-negative exercise.

The main sources of fuel are the national gas grid, AD plants, or what is known as fugitive methane: gas that would usually escape into the atmosphere from the likes of slurry lagoons.

The technology behind the methane tractor engines has been borrowed from New Holland sister company Iveco. 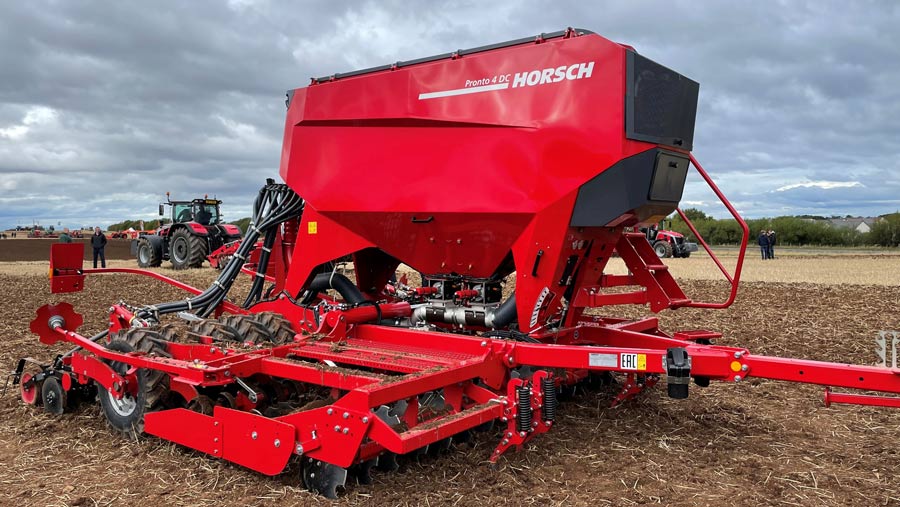 Horsch showed off the next generation of its long-standing Pronto range – the Pronto DC.

The biggest update comes in the form of a redesigned, higher-capacity hopper to give the machines a better range and reduce the frequency of refills.

This has been rejigged for each of the models, with the Pronto 3 DC and 4 DC coming with a 2,800-litre single tank, and the larger Pronto 6 DC equipped with a 4,000-litre version.

Sowing operations can be carried out at speeds of up to 20kph, and the addition of LED lights on the exterior should make it easier to work at night.

Also new for the range is a fan and optional oil cooler that sits within the hopper. This is located high up to reduce the risk of dust and straw particles being brought in through the pneumatic system.

The oil cooler is ideal for those wishing to use mineral fertiliser, and reduces the risk of issues when sowing in damp conditions.