Tillage focus: Organic vegetables from the farm gate to your Christmas dinner plate


Liam Ryan is in a sector where demand is outstripping supply and keeping up with that demand is his biggest challenge. This year the drought took its toll on crop yields.

He began organic farming in 2003 and farms just over 5ha of land near Crookstown in Co. Kildare, where he sells vegetables and salads directly from the farm – Moyleabbey Organic Farm – every Friday, as well as attending Carlow Farmers’ Market each week.

Liam works full-time on the farm and also employs two other members of staff, along with students throughout the year.

Having grown up on a dairy farm in Co. Tipperary, he lived in the UK for many years and completed an apprenticeship on an organic farm in England, before working in a market garden.

In 2003, he moved back to Ireland where he worked on the organic farm in the Dominican Convent in Co. Wicklow – organics is what he knows.

“I never did anything else. It wasn’t a big decision – I like the idea of it and I like food. It just made sense to me. There was no big decision. I just didn’t think of anything else really.

I like selling direct. Meeting people at the market is nice and connecting with the customers. Everything has its pluses and minuses.

“People are looking for something different, but I wouldn’t think of anything else.”

Liam added that the health impacts of pesticides are becoming more prominent and both growers and consumers are more aware of this. He also noted that there are now more organic inputs, which have had reasonable success. This is helping with his farming system. 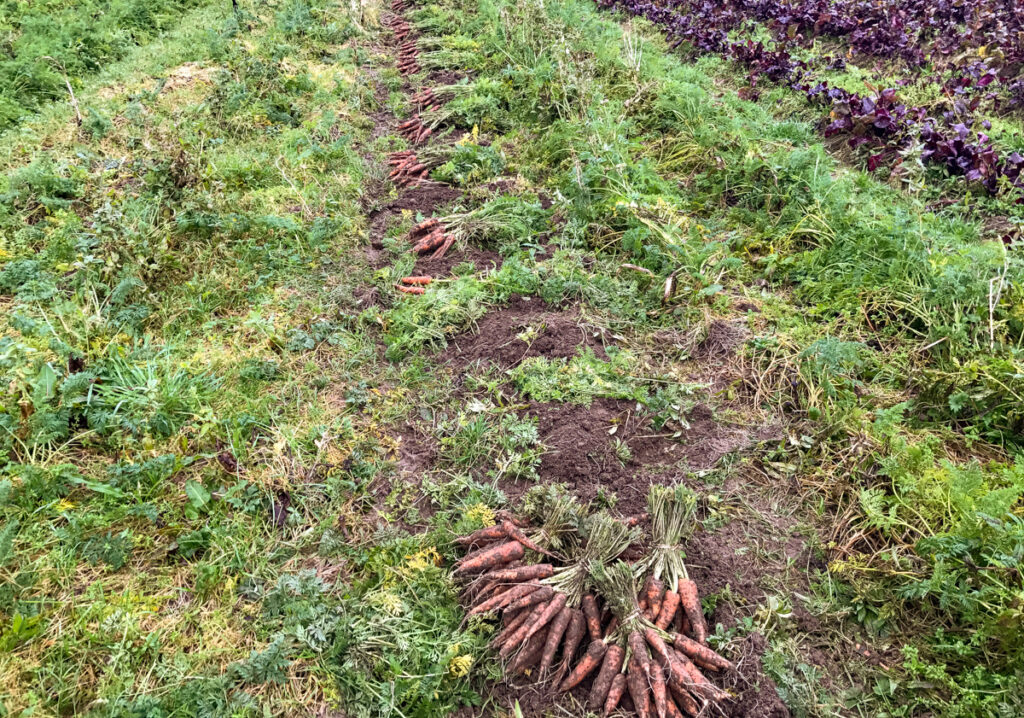 When AgriLand visited carrots were being harvested

“It’s the end of the year for us. We’re rounding up things and after Christmas then we’ll be working towards next year,” Liam explained.

Like all other farming sectors Liam was hit by the drought during the summer.

“The carrots are being bunched. We had problems with the dry weather and we would have had a lot of carrots in the other field, but they were one of the crops that went wrong in the drought.

We have low-volume sprinklers; we don’t have a big watering system.

“These are small, but they’re a tasty variety; we’ll wash them and I take off the tops because they dehydrate – even at this time of the year. People love bunched carrots.

“I’ve actually been buying in carrots from another grower this year. Last year I had carrots for about seven months. I tend to do winter carrots, because we do a lot of other things in the summer.”

Liam added that consumers’ mindsets are changing and he now has customers who look for carrots with forks, as opposed to the perfectly shaped produce.

“It doesn’t make a lot of difference – it’s the taste that’s important. Or, if there’s a little mark on them, it doesn’t have to be thrown away. The market is nice because there are enough people in there to buy all the produce and some people will go for the carrot with the fork.

Liam sells his produce from the farm every Friday and attends Carlow Farmers’ Market on Saturday mornings.

“We sell here on Fridays and Carlow Farmers’ Market [Saturday] is a very good market. It’s growing all of the time. There are two meat, two vegetable and fish stalls.

I used to do a bit of wholesale, but over the years the market has got busier and busier and I’m just trying to keep up with that really. 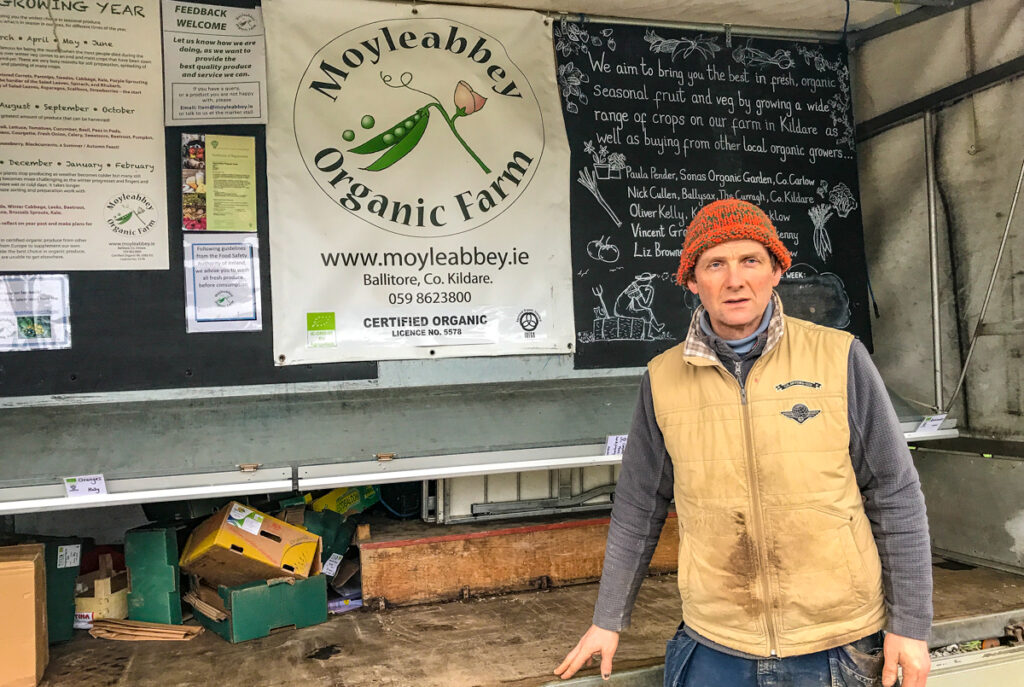 Liam’s stall for the market

Selling directly from the farm has proved popular over the years.

“We’ve been selling from the farm since 2005; once upon a time we used to be affected by Bank Holidays and things like that, but now it’s very steady. The customers have built up.

“The market is the same; it’s all regular customers, even when the weather isn’t great it’s still not bad because customers have decided to come because they’re regular. Veg is very stable like that, especially in a country town like Carlow.”

Liam’s beetroot crop was coming to an end. He sells it in bunches.

“We try to sow them thinly. I have a simple seeder, but it’s reasonably accurate. With the warm weather things are smaller than they normally would be, but we have a market for that as well,” Liam added. 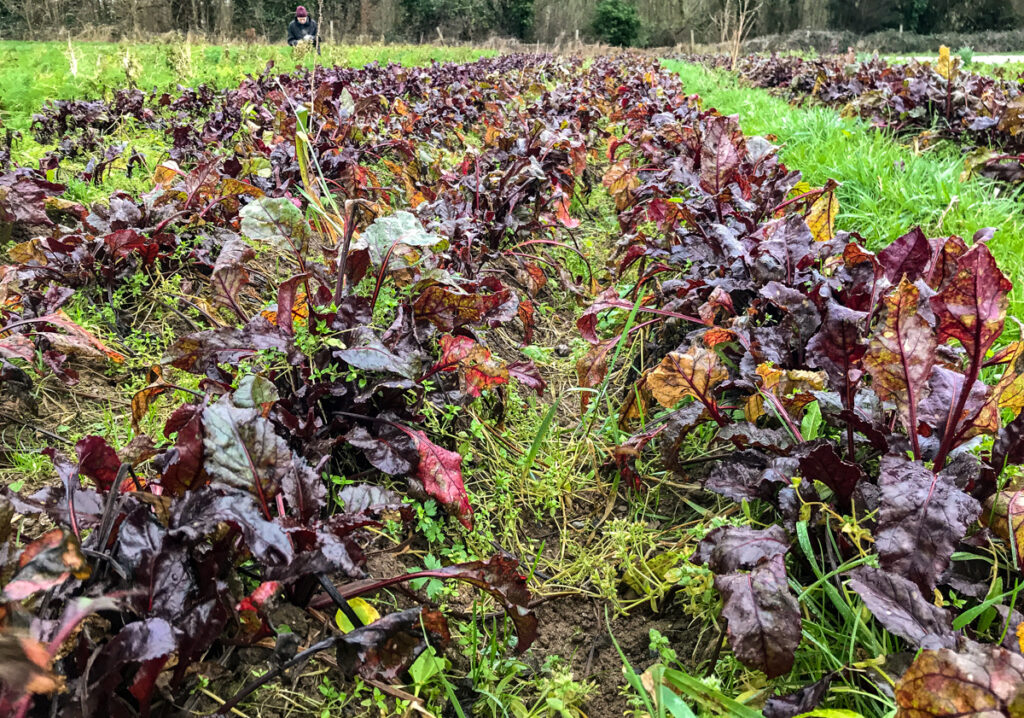 Liam sows his vegetables in ridges. He also uses green manures to improve soil fertility and act as a break crop for weed control. Over winter Liam sows a cover crop on the soil. Phacelia was growing this winter.

“We just run a ridger through. I use plastic on some crops. I have biodegradable plastic made from corn starch.

“We might go through the beetroot once by hand and the carrots would be the same. We take a break with green manure and it’s quite good once the crop goes in. Usually, it’s a two year break with Italian rye grass and clovers. 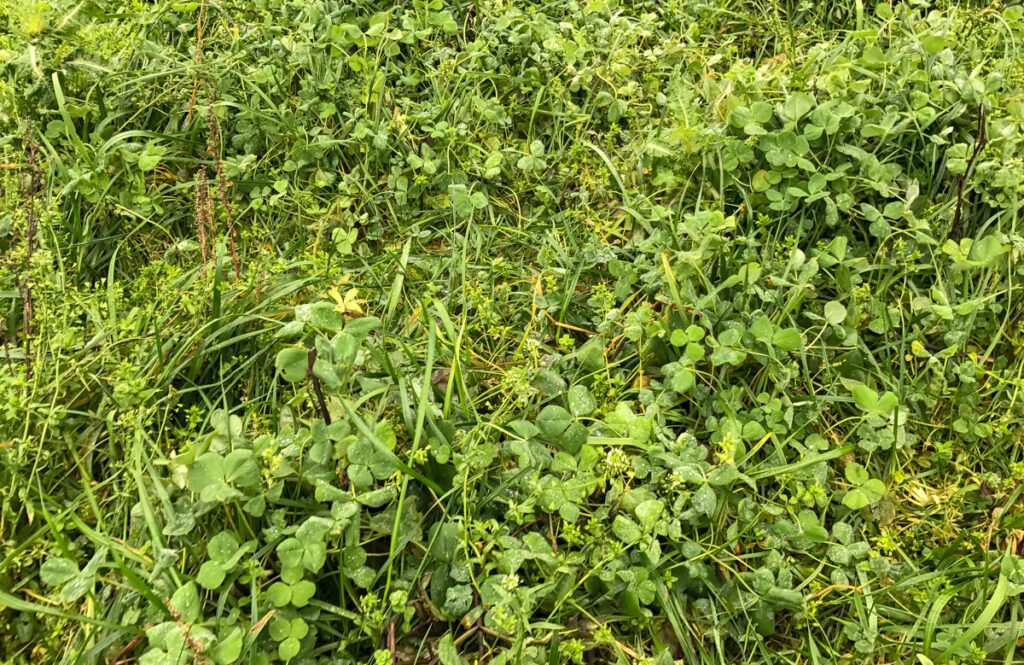 “After two years of that you don’t get a lot of annual weeds, like chickweed or things like that,” Liam noted.

“We cut the green manure a few times a year. It’s mulched down with a flail topper and composted farmyard manure is spread by a local contractor in the late summer of the second year. This is then ploughed the following spring and sown or planted up, as a succession of crops go in for continuity of supply for direct sales.

Ploughing has a lot of advantages in controlling slugs in organics.

Liam uses a bio-net to protect crops like kale from the birds. The dry and warm weather of 2018 mean’t that aphids were a problem.

“I had a lot of aphids this year, a lot more than normal because of the dry weather.

“I haven’t needed to control them in the tunnel for a long time and we would have tomatoes in there. There’s a biological product that works very well in the tunnel. 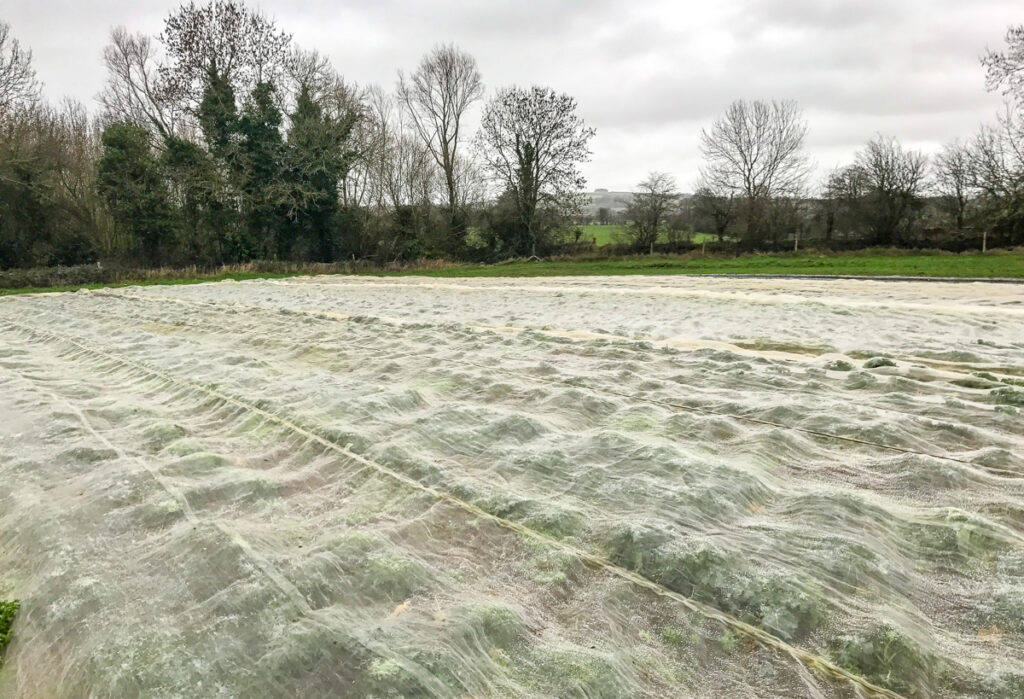 A bio-net covering some of Liam’s kale crop

“Outside we didn’t do a lot. It took care of itself. It was a bit of a pain. There are some sprays that you can get – biological sprays like garlic and citrus, but they’re not that successful.

“There were incredible populations of ladybirds this year. I think everyone saw that and they were doing a job, but it just took a lot of time. We had kale outside and that had a lot of aphids on it. That was problematic in July.” 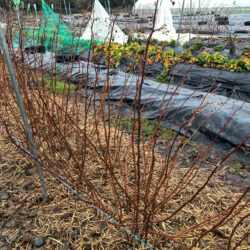 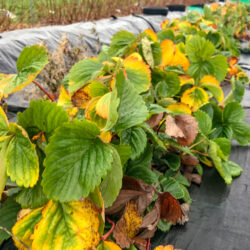 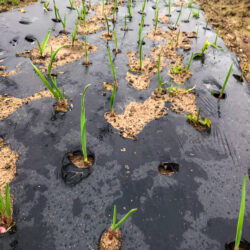 Liam currently has one main tunnel, which was originally a mushroom tunnel. He also has some smaller tunnels.

“I’d like to put up more tunnels over time so that I can do more winter salads. There’s quite a demand for winter salads and spinach. It’s worthwhile having it in tunnels, but tunnels are expensive.”

Liam is a member of the Irish Organic Association and joined when he entered the organic farming scheme. He sees this as the biggest advantage to the scheme.

“You’re part of a club and you’re benefiting from that. You’re joined up with a lot of people who are trying to produce healthy food, a healthy environment, communities, people and wildlife. You’re joining that club and that’s the big benefit of it I think. 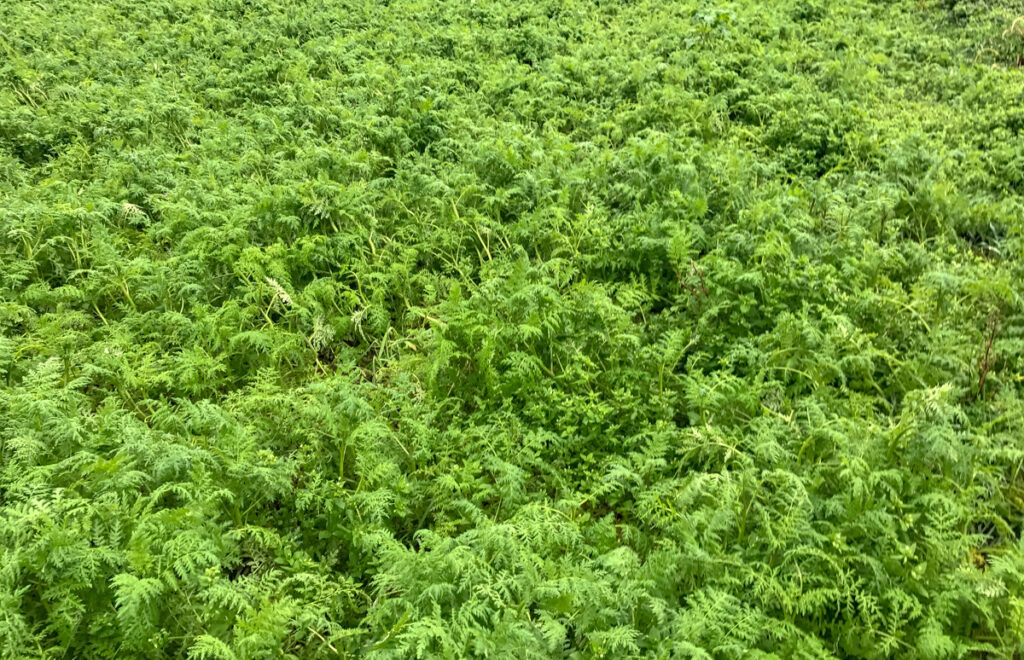 “There’s organic grants. I’ve availed of the odd one of those over the years. I got the flail topper and my scales were originally funded under the scheme.

The payment is grand. It pays for the fee of joining. If you have a big area of land it adds up, but here it doesn’t added up to a lot.

“The great thing the IOA is doing now is the MOPS [Maximising Organic Production Systems] scheme. I think they have 12 farms on that three-year programme.

“It’s trying to help places to become more efficient; looking at everything and trying to give advice and help and to join up the production and sales.

There’s more demand than there is produce, but it’s not easy to join it up because it’s fragmented all over the country. There’s little bits wanted everywhere.

Liam added that you don’t need a big land base to start growing vegetables or salads.

“It’s plenty of land [5ha], even 5ac. You can do it on a smaller amount of land if you want, you can concentrate on salads if you want, if you have a good market. There’s different options there.”

‘Irish organic farmers have a real opportunity on their doorstep’

Effect of EM on Fungal Infections in the Soil

Effect of EM on Fungal Infections in the Soil

EM and its Impact on the Quality of Compost