The Plan to Save Australia’s Wild Macadamia Trees

by agrifood
in Farming
Reading Time: 5 mins read
A A
0
Home Farming
Share on FacebookShare on Twitter


Ian McConachie has spent much of the past 50 years tramping through the rainforest on the hunt for wild macadamia trees. “Finding a wild macadamia is akin to the thrill of finding gold,” he says.

Yet it’s not the sweet buttery nuts that command up to $25 per pound for which he’s searching but rather the living gene bank that exists within the last remaining wild trees.

Macadamias evolved in the cool, lush rainforests on Australia’s east coast around 50 million years ago and were once ubiquitous there. But McConachie estimates that around 90 percent of wild macadamia trees have been lost since European settlement, while all four species are classified as endangered due to scattered distribution, habitat loss and other impacts.

That hasn’t stopped macadamia nuts from becoming Australia’s largest native export, with around 50,000 tonnes produced each year, according to the Australian Macadamia Society, an industry body representing more than 700 growers.

But, as with many commercial crops, the history of the nut’s domestication means that crops under cultivation largely lack genetic diversity. 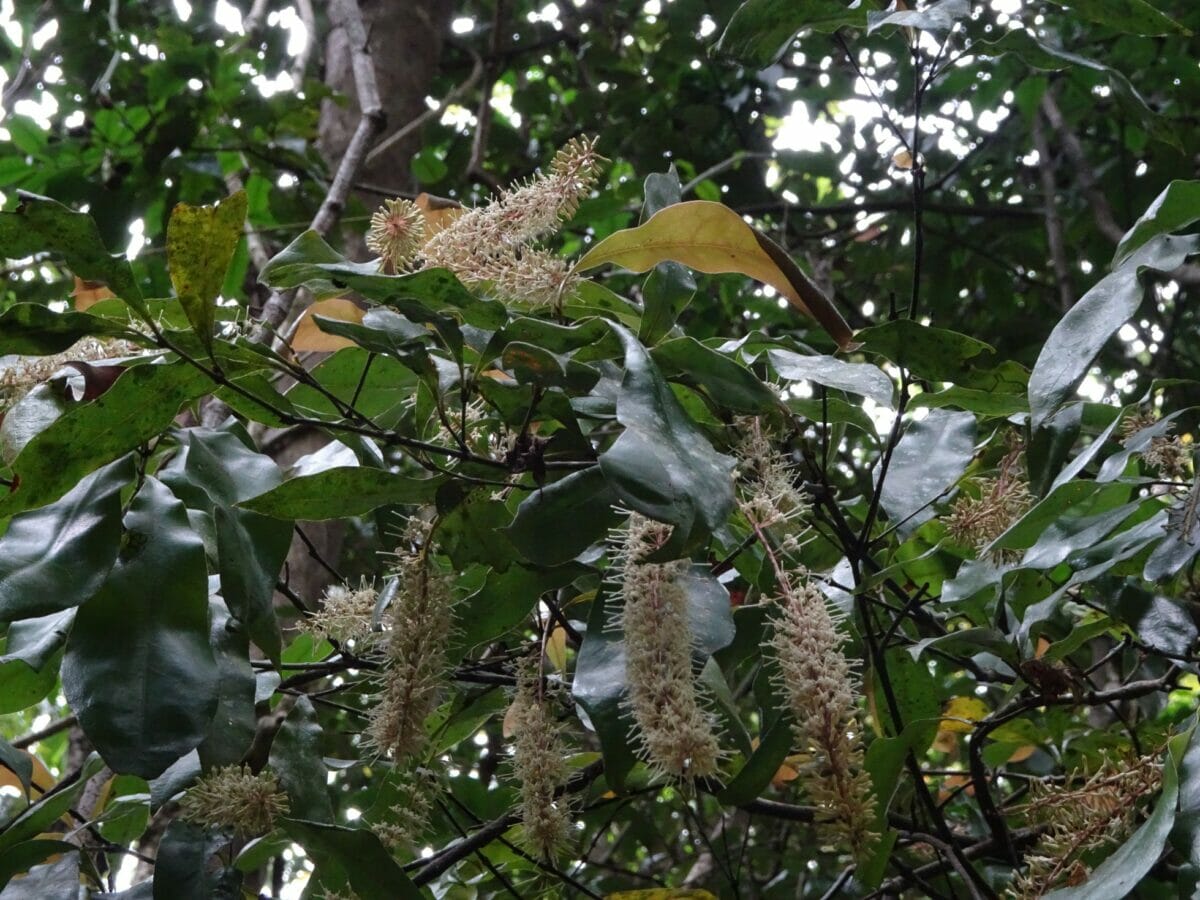 A Macadamia jansenii tree flowers. Photo courtesy of the University of Queensland.

According to research published in Frontiers in Plant Science in 2019, the macadamia variety on which the global industry relies may have originated from a single tree or, at most, a handful of trees, taken from Queensland to Hawaii, where the crop was first grown commercially, in the 19th century.

“So, probably 60 percent of macadamia trees planted in Australia and 80 percent planted in the rest of the world have a very limited genetic base,” McConachie says.

For that reason, the Macadamia Conservation Trust, founded by McConachie in 2007, has recently launched a project with Macadamias Australia, a major family-run producer, to create an arboretum of wild-sourced macadamia trees that will serve as an “insurance population.”

“We’re conserving [wild macadamia trees] because they’re part of Australia’s heritage and because of their long-term breeding potential,” McConachie explains.

A nursery housing the first 38 saplings, out of a planned 640, can be found 20 minutes’ drive south from Macadamias Australia’s new $25-million AUD ($17.8-million USD) processing facility and visitor center.

Macadamias Australia’s orchard general manager John Vaughan says that the organization has set aside two precious hectares where trees propagated from wild cuttings will be planted. All four species will be represented, but the collection is starting with the most vulnerable, the Macadamia jansenii, which is as rare as Australia’s Wollemi Pine.

Only 200 individual Macadamia jansenii trees remain in the wild, all in Bulburin National Park to the north, where they had a close call when bushfires ripped through the area in 2018. “[The fires] got within 10 kilometers of that population,” says Vaughan.

[RELATED: How Australia is Demystifying the Secretive World of Truffles]

The project has gotten off to a slow start, due to years of drought and other issues complicating the collection process. However, when complete, it will be the country’s largest macadamia conservation project.

Meanwhile, scientists are exploring wild macadamia DNA in the quest for favorable traits, such as greater disease resistance and lower oil content. 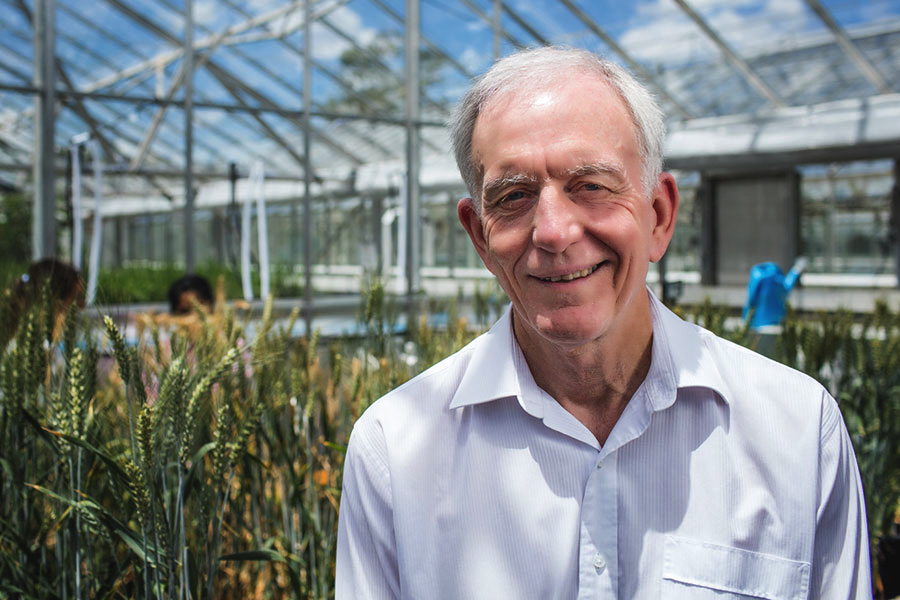 Robert Henry. Photo courtesy of the University of Queensland.

Robert Henry, professor of innovation in agriculture at the University of Queensland, says researchers are midway through a three-year program probing the DNA of 300 to 400 different macadamia varieties. The aim is to produce a high-quality reference sequence of the genome of the four species. This will help guide collection efforts and prioritize conservation activities. The team has characterized more than 30,000 genes governing everything from taste to tree size.

Desired characteristics include a high kernel recovery (ratio of nut to shell), along with small stature, which is considered “highly desirable” in a horticultural tree crop because it makes harvesting and high-density planting easier.

As such research begins to bear fruit, McConachie hopes the conservation message will catch on more broadly through a publicly accessible “Walk with Wild Macadamias” project currently under construction near Gympie, in the Sunshine Coast hinterland. Once completed, visitors will be able to spot the trees, which can live for more than 100 years.

“They are truly iconic plants that are under real threat from past habitat loss and fragmentation, weed invasion, development and climate change,” he says. “We cannot stand idly by when we have the capacity to do something about it.”

Farmers have trust issues with their chemical advisors. Data can help

Hello and welcome to This Week in Farming, your regular catch-up on the best of Farmers Weekly in the past seven days. Each week we look through five...

A common thread running through the many tributes to our late Queen is her devotion to duty and service. Even the least ardent royalists among us can find...

Liz Truss has pledged to slash red tape in the UK agriculture industry to allow farmers to spend more time producing food. The prime minister made the promise...

The green lobby are an excitable lot, aren’t they? I don’t know what they eat, but it’s given them a serious case of irritable growl syndrome. After a...

High food prices on American supermarket shelves are reflecting one of the biggest inflation surges in decades.  In fact, the prices of groceries this year have spiked to...

Farmers have trust issues with their chemical advisors. Data can help

In April 2021, then-president Gotabaya Rajapaksa abruptly banned imports of chemical fertilizers, pesticides and herbicides, in an attempt to preserve...