by agrifood
in Markets
Reading Time: 6 mins read
A A
0
Home Markets
Share on FacebookShare on Twitter


Farmers who have begun putting regenerative farming in practice are becoming more confident about the system and are finding that the rewards vastly outweigh the risks.

Farmers Weekly spoke to farmer members of Base-UK about their experiences of regenerative farming, which is based on building a healthy soil and working with nature.

Trying new things, learning from mistakes and keeping an open mind are common factors, as is the acceptance that there aren’t any rapid solutions for depleted soils or a recipe for success.

As Defra unveils schemes that reward environmental services and good practice, work being done as a matter of course on these farms will be paid for, going some of the way to fill the hole left by the phasing out of the Basic Payment Scheme.

Speaking about the Environmental Land Management scheme, Ian Gould of seed supplier Oakbank pointed out that most regenerative farmers are already meeting the first Sustainable Farming Incentive (SFI) arable and grassland soils standards, by their use of practices such as cover crops, organic matter measurement and herbal leys.

“What’s really good is that the SFI standards don’t require the activity to be additional, so there’s no issue or penalty if you are already doing these things,” he said.

“You can build your way into the system, which means that you can make changes and improvements over time. That also sits well with the regenerative mindset.”

For farmers looking to “do their bit”, reduce input use and minimise any impact, insecticides are a good place to start. Not only are insecticide numbers declining, resistance among pest populations means their effectiveness is also waning.

As Sam Cook, senior research scientist at Rothamsted Research, highlighted, that puts beneficial insects in the frame for the pest control services that they can offer.

Believing in these natural enemies is essential, she stressed. The agronomy and habitat management practices that farmers can do to encourage their presence and boost their numbers include:

“These will all help, but we do still need to know more about pests and the distribution and abundance of their main natural enemies, as well as how much control we can expect,” she said.

With conservation biocontrol, the aim is to tip the balance of pest and natural enemies in favour of the latter, stressed Dr Cook, who added that getting them to move into the field was another challenge.

“More research is needed to take out the ‘hit or miss’ element. Farmers who are leading the way by not using insecticides are showing that it can be done.”

Kent farmer Andrew Lingham started to change the way he farms back in 2009, and describes the period since then as a constant challenge.

Despite that, he has held his nerve and discovered that it can be done. Having followed his instincts from day one, believing it was the right thing to do, he now has a balanced farming system which delivers food and biodiversity.

“It was a complete disaster,” he admitted. “We had problems with aphids and both my winter and spring wheat was full of BYDV.”

That experience taught him to expect some short-term kick-back when making changes to an established system. He saw the same thing happen with slug and snail populations when he stopped using slug pellets.

Determined to succeed, he stuck to his plan and battled through. “Before long, nature starts helping you. Once the system becomes balanced and there’s plenty of diversity, it’s so much easier. We don’t use any insecticides now.”

Today, Group 3 wheats are grown with just 100kg/ha of nitrogen, compared with his previous use of 220kg/ha. His high organic matter soils are cycling nutrients well, helped by living roots.

Livestock are integrated into the system, with both store beef and store lambs produced for the on-site butchery and farm shop. Often running together, the “flerd” is used to graze the multispecies cover crops found at Court Farm.

Mr Lingham’s advice to others is to be prepared for some pain as they make changes, especially when it comes to insecticides.

“We’ve had researchers on the farm doing counts and our ground beetle numbers have gone through the roof,” he reported. “I’ve stopped questioning whether I am doing the right thing and started to enjoy it.” 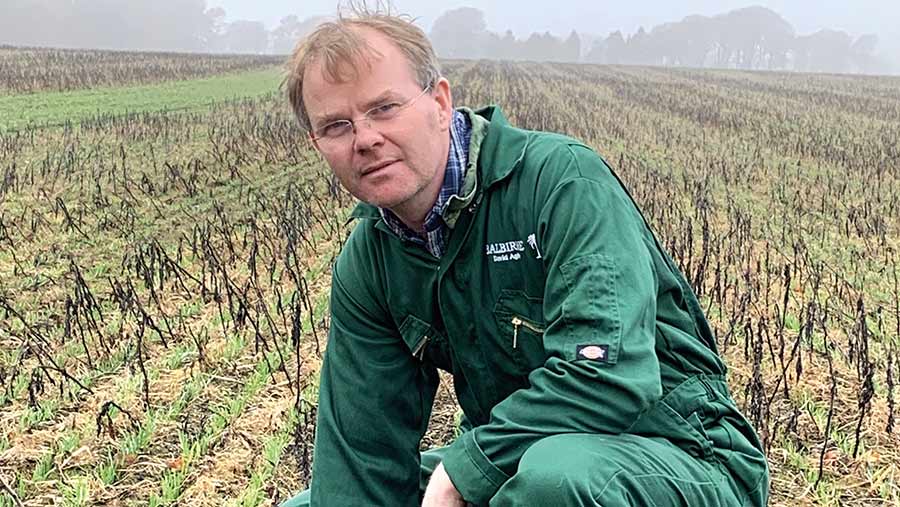 His belief has grown as he has made changes across the 1,150ha he oversees at Balbirnie Home Farms, where combinable crops, vegetables and potatoes are produced, along with beef from a suckler herd and timber from forestry.

Having started in the very wet years of 2011-12, he waited to introduce no-till until ground conditions were suitable.

With vegetables in the rotation, it was difficult to improve soil health, especially when they had to be harvested in wet conditions. This was behind his first lesson:

Lesson 1: Grow a smaller area of vegetables/grow vegetables in a different way

The area devoted to vegetables and potatoes has reduced at Balbirnie, although Mr Aglen is reluctant to drop them completely.

Instead, he has looked at different ways of establishing them, trying to do as little to the soil as he can get away with. “We are still working on this.”

Having hired and borrowed different drills, as well as getting some demonstrators to see what could be done, a no-till drill was purchased. It highlighted the damage that the vegetable crops were doing to soil structure.

While he could establish winter crops without too much trouble, spring crops were more challenging and rotation design proved tricky.

“Our soils form a cap after rain, so we can’t leave bare ground over the winter. Having accepted that, it became my third lesson.”

Cover crops have become part of the farming system, with 15-way mixes used during the summer – only five species are useful in the winter.

While they have cost money to grow, they are now being grazed by the cattle and are helping to improve soil condition.

Drilled before break crops in the autumn, their rapid growth and biomass production presented an opportunity for the cattle enterprise – three crops in two years.

“We now grow the food and take the cattle to it, rather than taking fodder to housed cattle. By cutting and baling a rye-based cover crop and putting a kale crop in behind it, the cattle strip-graze the kale through the winter.”

The savings in time and fuel that this created was his fourth lesson.

To close the funding gap that will develop as support is withdrawn, Mr Aglen is looking for ways to cut costs or add value.

While having more livestock on the farm will require expenditure on fencing, it should allow the business to capture more product margin.

Having chickens on pasture or pigs on cover crops could be relevant, he suggests. “We need to keep moving forward and try these things. Some will work, others won’t – but we won’t learn if we don’t try.”

His journey started on his Northumberland farm more than 20 years ago, with the aim of improving the condition of his farm and the health of the soil for the next generation.

Membership has increased rapidly in the past two years, no doubt accelerated by the frequent mention of regenerative agriculture by the policymakers determining farming’s future.

“Whatever you want to call it, we are all farming in a way that works for us, makes our farms more resilient and delivers for the environment,” said Mr Taylor. “We are also sharing our knowledge and experience with other like-minded farmers.”

Whether you have a legal, tax, insurance, management or land issue, Farmers Weekly’s Business Clinic experts can help. Here, Andrew Robinson, partner and head of agriculture at Armstrong...

Deere’s investment in InnerPlant is about changing Big Ag

John Deere‘s recent investment in crop health startup InnerPlant is far bigger than the $16 million figure attached to the deal. In many ways, it seems Deere is...

Investments in African agrifoodtech startups reached record heights in 2021, according to AgFunder’s inaugural Africa-focused report in collaboration with BII and FMO. But who were the key investors...

Vendease, a Nigerian fresh and processed food procurement platform on a mission to automate food supply in Africa, just secured $30 million in a Series A round that...

Farmerline nets $1.5m from Oikocredit in second close of Pre-Series A

Farmerline Group, a Ghanaian agribusiness marketplace today announced the second close of a Pre-Series A round with an additional $1.5 million investment from social impact investor Oikocredit.  The...