For many, the sight of a Transit van barrelling into a farmyard triggers frantic numberplate scribbling and alarm calls to neighbours, but Ford hopes its latest Trail model will have a more enthusiastic welcome among the farming fraternity.

That’s because it brings all-wheel drive into the equation, allowing owners (of the decent, honest and hard-working variety) to make the most of the cavernous load space to cart half a workshop, half a flock, or a grandfather clock in the dry and off the beaten track.

Only one particular Trannie offers such versatility – the mid-range, 170hp Trail that is built in Ford’s Kocaeli plant in Turkey with a little help from a familiar British name. Kent-based Countytrac, once a specialist in Transit 4×4 conversions through the 1980s and 90s, now provides the electronically controlled all-wheel-drive kit, which is fitted to otherwise orthodox rear-wheel-drive vans.

Most of these Transit 4x4s are expected to wind up in the hands of rescue services, utility companies, quarries and forestry sites, but the haemorrhaging of UK pickup options means Ford sees new opportunities in the farming market.

With that in mind, the Transit Trail has a burlier look to differentiate it from the bog-standard delivery vans that crunch up the kerbs of suburbia.

The traditional bland nose and blue oval badge has been ousted for more of a pickup vibe, styled on the Ranger Raptor’s coal-coloured lower-body cladding, a thumping great Ford-stamped grille and 16in black alloys.

What transmission does it have?

Dithery decision-makers will be relieved to hear that most options – including those of the gearbox and engine – have been taken out of their hands.

The automatic transmission in only available on front-wheel-drive models, so Trail buyers must make do with the single-range, six-speed manual. It comes with a short, lively first gear that, in most circumstances, makes up for a lack of low range. Early acceleration is spritely, but it quickly needs snatching into second to maintain momentum.

We found this switch to be a little sticky, and the gate to second elusive, but the transitions through the rest of the cogs are agreeably notchy.

Drive is sent via Ford’s “intelligent” all-wheel-drive system that monitors wheel speed and driver input (throttle and gear) to determine where the torque is directed.

The rear-wheels are the primary means of propulsion, but any sniff of them slipping automatically engages a wet clutch and the mechanical differential that transfers torque to the front.

The driver has no say in this – the only opportunity for tampering is through the selection of a “mud and ruts” mode, which allows for a 50/50 split of drive between front and rear and knocks out the traction control.

This works well in moderate to poor ground conditions, but Ford’s biggest faux pas is the impractical, factory-fitted footwear. A set of 235/65 R16C Michelin Agilis is standard – both VW’s Crafter and the equivalent MAN get the same – and they are mightily road-biased.

Chunkier tread options aren’t on the options list, so those wanting a bit more bite will be forced down the aftermarket route for a set from BF Goodrich or General Grabbers, and they don’t come cheap.

Any other changes to the undercarriage?

Little, aside from an underbelly skid plate. Up front are independent struts, shocks and coils, and there is a single-leaf setup at the rear, all of which are tuned to favour firm ground. The upshot is that it handles pretty well on the road, even when unladen, and the steering is reassuringly responsive.

But away from the safety of pancake-flat asphalt, potholes cause shuddering crashes and bangs that betray a lack of suppleness compared with the average pickup.

The rear bumper is roughly 450mm off the ground and out of harm’s way, but the rear differential and suspension elements dangle well below the axle, butchering overall clearance. Given it doesn’t have a snorkel or axle breathers, it’s also wise to steer clear of deep water.

Is it powerful enough?

Ford has apparently overcome the engine gremlins of its widely used 2-litre EcoBlue diesel that is also fitted to the entirety of its pickup range.

It’s tuned to 170hp on AWD models; opting for the rear-wheel-drive variant brings 130hp and 185hp outputs into play.

The EcoBlue block is at its best between 1,800rpm and 3,000rpm, beyond which its enthusiasm dwindles, and the lack of sound deadening becomes ear-achingly obvious.

However, our 30.1mpg average stacked up surprisingly well against a pickup, particularly given the van’s size and shape, and it has the torque to trundle around in sixth at relatively low speed.

One strange quirk with the design is that the passenger door latches over the lip of the fuel filler cap, so has to be opened at the fuel station.

What about the cab?

Trail spec Transits come with all the trimmings, including a leather steering wheel, air conditioning, automatic lights, heated windscreen and mirrors, parking sensors and cruise control – luxuries many would begrudgingly do without in return for shaving a few grand off the near £50,000 list price (ex VAT).

The interior feels roomy, and the driving position is high and predictably upright, but limited up/down movement on the seat restricts the degree to which the driver can get comfortable.

Fit and finish is a balance of practical and smart, with the piano black gloss around the centre console offset by workaday wipe-clean leather upholstery, black trim and plastic floor liners. 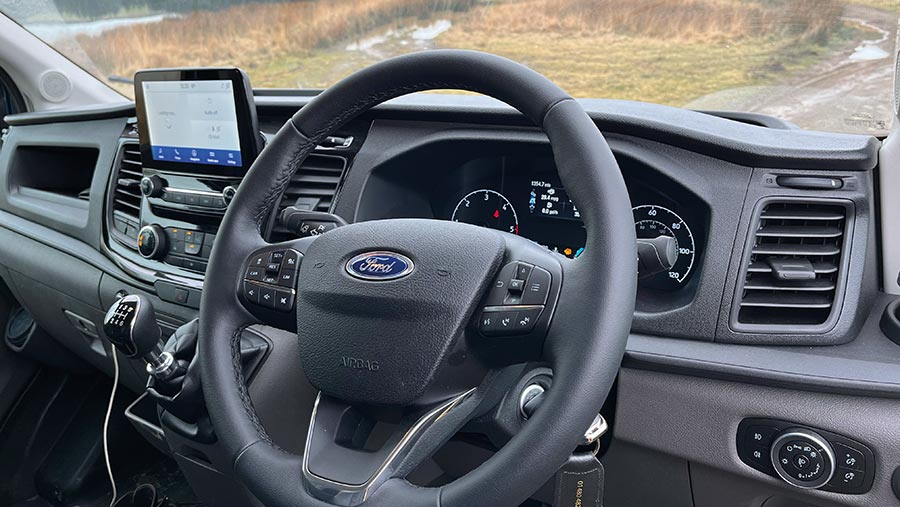 Cubbies appear everywhere, providing near-endless places to abandon Red Bull cans and the remnants of McDonald’s visits. There is more stowage on a full-width shelf above the windscreen, and the back of the central seat will swing down to form an emergency tabletop and cup holder.

Ford’s Sync3 infotainment system is also part of the package, although most owners will bypass the basic software to use Apple CarPlay/Android Auto via their smartphone.

The layout of the controls is simpler than the Ranger pickup, with big, clear dials for fan speed and temperature that can be located without looking.

How much can it carry?

The 1,279kg payload, marginally down on the rear-wheel-drive equivalent, means conversion into a mobile workshop will require careful planning.

It’s also rated to tow 2,800kg, which opens the option of dragging a diesel bowser behind. Some rear-wheel drive models can tow the full 3,500kg, though.

The cargo hold gets lights and lash-down points, and our model was fitted with a slightly extravagant powered side door.

The deal-breaker for anyone mulling the switch from a pickup will be price, as the Trail comes in at just under £50,000 ex VAT – well over 25% more than Ford’s best-selling pickup, the Ranger Wildtrak.

That difference would pay for a fully furnished hard top and makes the argument for a van a whole lot less compelling – unless size and security of the cargo space is indispensable.

Ford claims that the Transit is now the UK’s best-selling vehicle, so it’s no surprise that there is almost every conceivable shape and size to pick from.

From small to big, sub-genres include the Connect, Custom and straight Transit, available in regular cab, double-cab and Kombi and a befuddling list of specs.

However, things are pretty simple where all-wheel drive is concerned, as it’s only available on the big Transit. This can be had in three different lengths (L2, L3, L4) and two height options (H2 or H3).