Modern tractors laden with computer systems, electric spool valves and complex transmissions are generally expected to be a nightmare for owners who run them into old age.

But for North Yorkshire farmers Tom and Richard Sanderson, a fleet of high-hour Fendts – the busiest of which has worked 21,500 hours – is giving them surprisingly dependable service.

The first Fendt arrived on the farm when local dealer Brockhills started selling them in the late 1970s, and the Marktoberdorf brand has been present ever since. “We’ve had a few other makes over the years, but they’ve rarely stayed for long,” says Tom.

They now have six models ranging from a 1984 Farmer 308 to a 724 Vario from 2016, most of which have worked more than 15,000 hours. Few have given significant mechanical trouble, but there has been the odd expensive breakdown.

That said, these are minimal compared with the cost of running new tractors, with high finance payments and heavy depreciation to stomach. “We’ve always had other things to spend the money on, so we’ve bought tractors on reasonably high hours and got as much work out of them as we can,” he says.

Part of the reason is that the tractors are well built, but it is also down to the backup they get from Brockhills, which is based a couple of miles from their yard. “We couldn’t run the tractors to these hours without their help – there are two mechanics, Liam Read and Rob Reed, who always get us going, whatever time of day it is.”

The Sandersons also use local independent mechanic Sam Maltman, who carries out a large chunk of the maintenance work that doesn’t require a laptop loaded with Fendt software.

With 70ha of spuds, 320 breeding ewes, 120 head of cattle and 200ha of arable, the farm needs all of its tractors to work hard. This means there is no spare to take up slack if one has a significant meltdown.

“They break down a bit more than new or nearly new tractors,” says Tom. “But most of the time they are minor niggles that we can limp on with and fix when we’re less busy – we’re rarely stopped for long.”

Here is the line-up in a bit more detail.

As a mixed farm with stock to feed and bed down, the Sandersons need some simple, basic horsepower that doesn’t cost much to run.

The two-wheel-drive Farmer 308 fits that description, with a solid 4.2-litre four-cylinder MWM engine allied to a basic 21-speed mechanical transmission. “Fendts from this era are bulletproof and I’ve never heard of one giving any engine or gearbox trouble,” says Tom.

It came from a nearby farm 15 years ago when it was on 8,000 hours and it was initially put to work hauling a Knight trailed sprayer with 2,000-litre tank and 21m boom. Power is only about 85hp, but it was well up to the job.

For years, it also pulled a Standen 242 spud planter, before more powerful tractors stepped into the fray. Now the 308 runs the feed mill and mobile dryer, and spends most of lambing hooked to a link box.

After 19,000 hours of work, the only notable problems have been a £500 end section on the power steering pump and a blocked hydraulic oil filter caused by flour dust from the mill.

“It’s not worth much to sell, but it’s valuable to us and we’ve got no plans to get rid of it,” says Tom. “We might tidy it up and semi-retire it at some point, but it’ll still need to do some work as we’re not into tractor runs.” 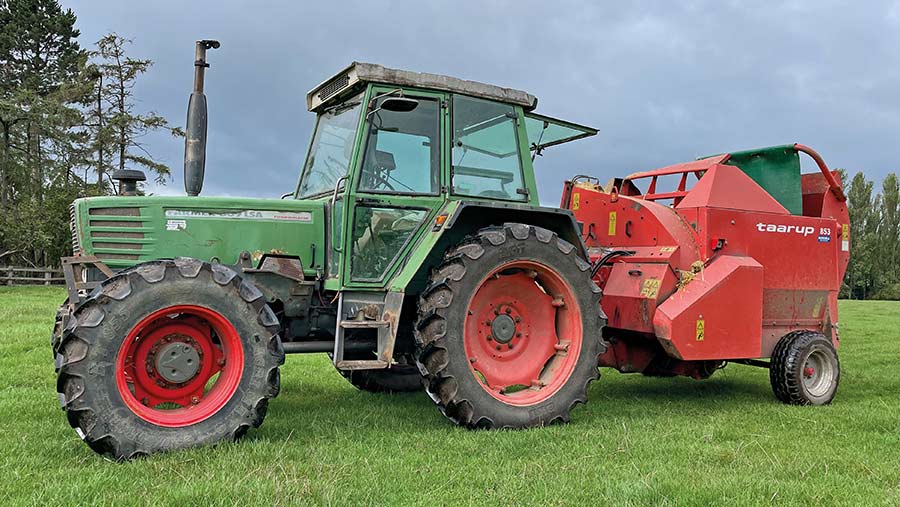 The 309 was the last tractor the farm bought new, in 1997, and it came with a factory-fitted Fendt loader.

For the first eight years of its life, it did all the farm’s materials handling, including loading lorries with a 1t toe-tip bucket. This was a big ask, but it stood up to the work without any problems and is still on its original kingpins and bushes.

It has had one expensive breakdown, when a seal went on the front axle and the tractor was too mucky for the leaking oil to be noticed. Eventually, the orbital unit packed up, resulting in a £4,500 repair bill.

Now it spends all winter running a Taarup straw bedder and in the summer carries out lighter duties such as raking.

“The cabs on these tractors are a bit of a greenhouse and there’s no air conditioning, but you can fling open the windows and it makes a nice change from sitting in an air-conditioned box,” says Tom. 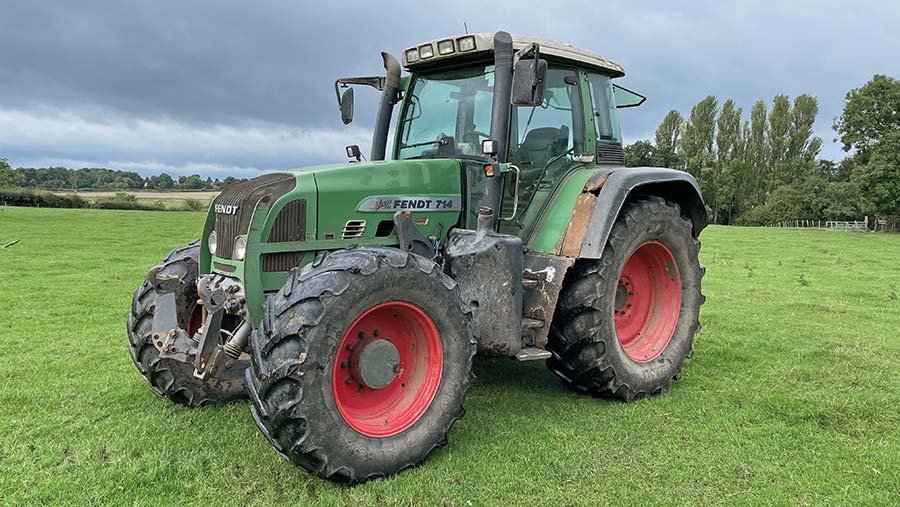 The farm has a new Manitou MLA-T pivot-steer as the primary materials handler, but the 714 is still called on regularly for loader work, particularly when there is bale loading to be done and the fertiliser spreader needs filling.

It gets used for plenty of other jobs, including hauling trailers, pulling a 4m Cultipress and running a destoner.

Reliability has been good, but it has had a couple of notable breakdowns. The biggest was a failed seal that caused the rear left bell housing to wear and need replacing, entailing a repair bill of about £4,500.

It also had a faulty oil cooler that leaked into the radiator and caused it to overheat. Several fruitless attempts were made to blow out the radiator before the problem was diagnosed. A new oil cooler and a thorough clean of the rad sorted it out for good.

The tractor is now on 17,800 hours and could be changed in the next few years for a model that has done less work. 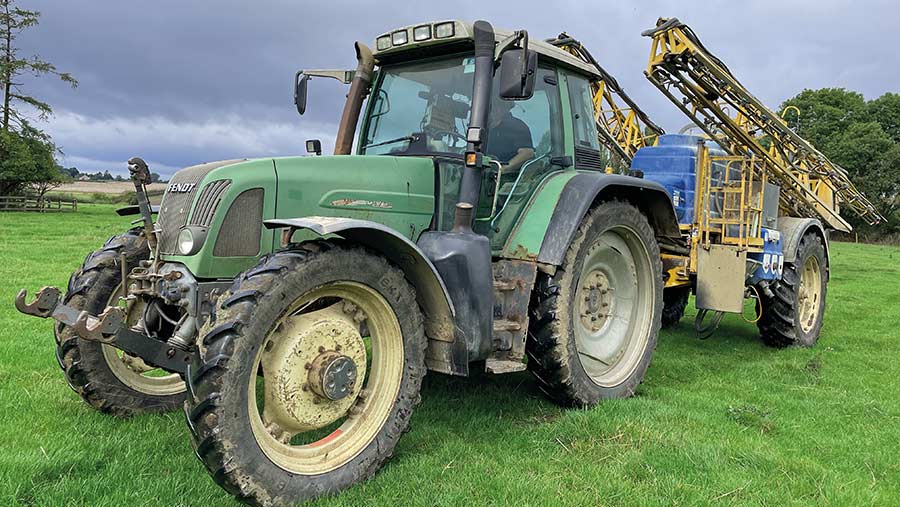 It was bought when it was on 7,500 hours, and 500 hours before this it had been treated to a new Vario gearbox.

For years, it was the most powerful tractor they had, put in charge of ploughing, subsoiling and drilling, as well as running the potato harvester. It’s only recently stepped back from the limelight to concentrate on pulling a 24m Knight EU trailed sprayer with 3,500-litre tank and running a destoner.

It also hauls a 14t spud trailer and runs a root chopper bucket for the sheep in winter, largely because it has the best heater of the lot. 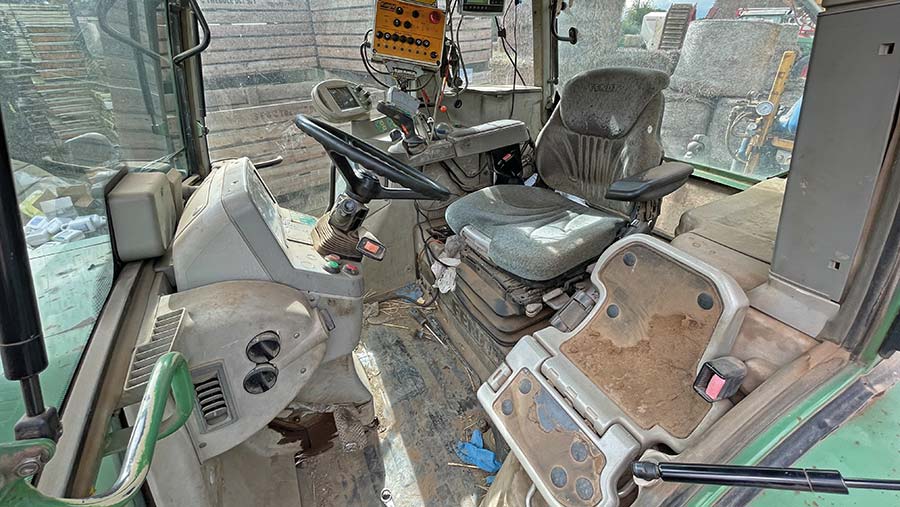 Unlike the 714, 820 and 724, the transmission doesn’t have TMS to control engine speed and transmission ratios automatically. This means the operator needs to set the revs manually on the foot or hand throttle and use the joystick to speed up or slow down.

“This isn’t much of an inconvenience for us as we’re often using the tractors on pto work where you want to fix the revs,” says Tom.

The tractor has had few mechanical problems, apart from a faulty wiring loom that was tricky to pinpoint and a failed shaft between the engine and gearbox that cost about £2,000 to replace. 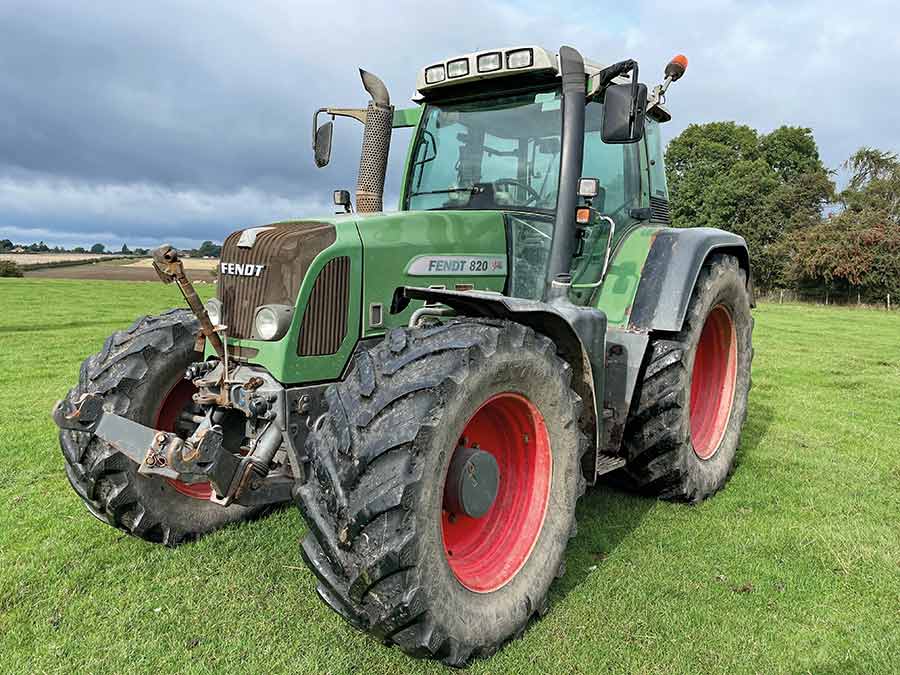 Before the 724’s arrival last year, the 820 was the pride of the fleet, doing almost all the heavy cultivation work.

A lot of its time has been spent pulling a five-furrow Kuhn Multimaster plough and a 3m Sumo Trio, as well as bed tilling for potatoes. “It’s a real driver’s tractor with loads of usable power,” says Tom. “But it’s also small and light enough that it can be used for all jobs on the farm.”

On paper, it has some 40hp less than the 724, but he reckons there’s not much to separate the two on real work. “If the 820 was brand new it might even have the edge.”

In the 8,000 hours it has clocked up since, there have been relatively few breakdowns. However, it had one major setback when the Vario box gave up the ghost at 11,000 hours, resulting in a £14,000 repair bill.

Other problems have been minor, such as regular bearing failures on the turnable fenders that causes them to flop around. 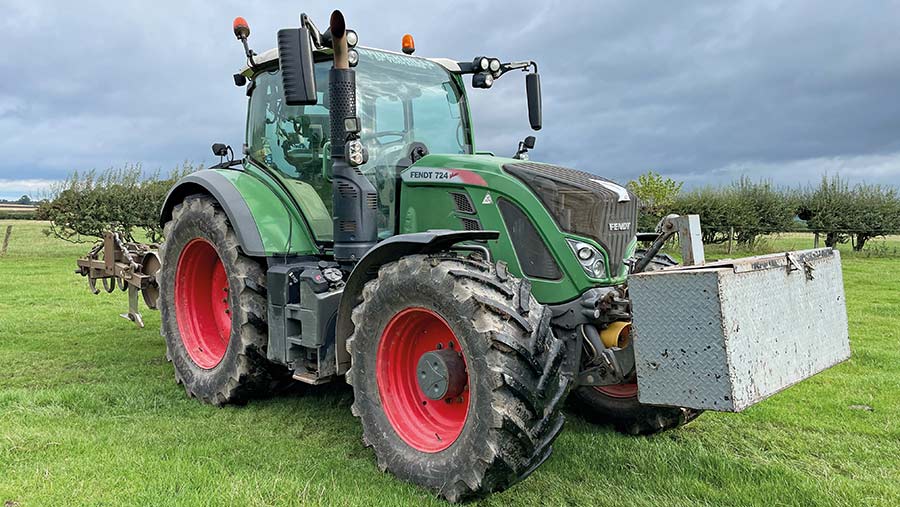 When the farm needed another tractor for the 2020 potato planting campaign, the Sandersons hired a 2016 724 Vario from dealer Brockhills.

They were sufficiently impressed that they bought it a year later for £85,000, when it had about 3,500 hours on the clock. Most of it was bought outright, with a small amount put on finance.

The 724 shares frontline duties with the 820 but, as it’s more comfortable to drive and has less hours on the clock, it gets to do more of the work.

It has been largely trouble-free, apart from the odd sensor and one occasion when they had to get the dealer out to perform a forced regen of the diesel particulate filter.

As earlier Fendt Varios on the market tend to be on high hours, the Sandersons are considering adding other 724s over the next few years, providing this one continues to go well.