SANTA ROSILLO DE YANAYACU, Peru — Swaths of recently deforested land and images of guns spray-painted on trees greeted the Santa Rosillo de Yanayacu patrol when they visited a portion of their community forest in northern Peru on Aug. 20, 2022. Members of the patrol said the forest had been intact when they had last monitored the area eight months prior.

“We were shocked; there’s been a full-scale invasion of our communal territory’s primary forests,” said a resident of the Santa Rosillo de Yanayacu Indigenous community, who asked to remain anonymous for safety concerns. “There were [deforested] clearings of 20 hectares, 5 hectares, 6 hectares. And at the edge [of the clearing] we found revolvers spray-painted onto the trees, as a threat warning us not to enter the area.”

It’s not the first time that the community of Santa Rosillo de Yanayacu, which is located in the Amazonian department of San Martín, has faced such problems. Mongabay Latam reported in 2021 on evidence of illegal deforestation and illicit coca cultivation, for the production of cocaine, in the Indigenous territory.

Observers have also reported threats against the territory’s authorities. In July 2021, Quino Inuma, president of the community of Santa Rosillo de Yanayacu, was allegedly beaten and received death threats after the anti-narcotics prosecutors visited the territory to investigate reports of rainforest destruction following an official complaint made by the community.

Satellite data and imagery visualized on Global Forest Watch indicate tree cover loss has surged in the area comprising Santa Rosillo in 2022, particularly during the latter half of the year. Historical data show deforestation has been steadily increasing since 2013, with several particularly large spikes of loss in 2013 and 2020.

“Eight months ago this entire area [of recently deforested land] was home to primary forests; now it is deforested,” said a Santa Rosillo de Yanayacu resident, who requested anonymity for safety reasons. “We have been fighting this since 2017, resisting illegal invasions [of our land], drug traffickers and loggers. It’s tough because they want to kill us.”

Milton Arévalo, director of the San Martín Forestry and Wildlife Directorate of the Regional Environmental Authority (known by its Spanish acronym ARA), said “the situation is delicate” in the area where the community is located.

“We have made several interventions with the police and the prosecutor’s office, but the situation is increasingly complicated,” Arévalo said. “There are coca plantations and clandestine airstrips.” 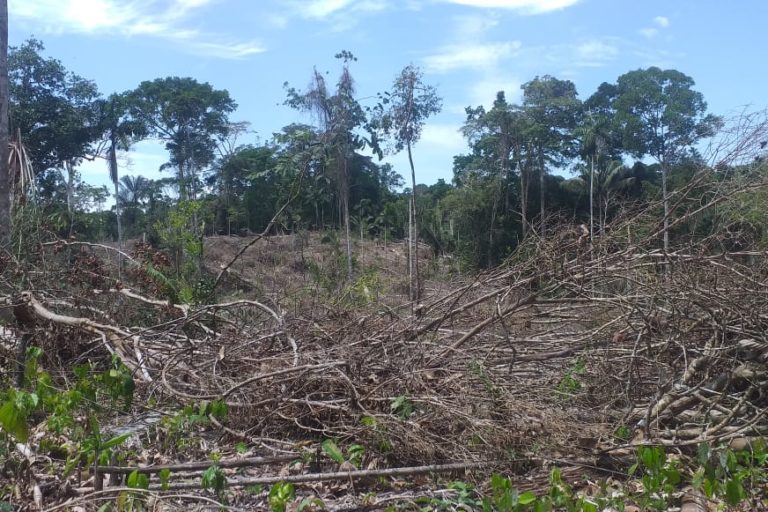 Arévalo lamented the threats faced by Indigenous community members who, he said, “cannot enter these areas because they are afraid and fear for their lives.” He added that regional authorities are planning to request federal government intervention to more effectively tackle the situation.

Mario Ernesto Torres, head of the natural resources planning and management arm of the ARA, said inspections carried out by police and the prosecutor’s office confirmed “affected areas of forest” and found evidence of illegal coca cultivation and logging.

“The illicit cultivation of coca, illegal trafficking of forest timber and land trafficking are behind the problem of deforestation,” Torres said.

Santa Rosillo de Yanayacu isn’t the only Indigenous community in the region impacted by illegal deforestation activities; other territories, such as Anak Kurutuyacu, have also been affected. On Sept. 2, 2022, concerned communities established the San Martín Regional Roundtable to address these incursions.

“We have faced threats since 2017, more or less, and every time that something has happened, we have reported it to the authorities; however we don’t have a concrete solution,” said Marisol García Apagüeño, an Indigenous leader and minutes secretary for the Federation of the Kechua Chazuta Amazonian Indigenous Peoples (FEPIKECHA).

Torres acknowledged that the response of regional authorities has been limited.

“This year we have visited twice, but deforestation continues regardless,” Torres said. “The authorities enter the region and we are there for a day or two, but then we go away and the problem persists.”

Cristina Gavancho, a lawyer from the Institute for Legal Defense, has been working with the Santa Rosillo de Yanayacu community since 2020. She told Mongabay she has filed four complaints with the Specialized Environmental Prosecutor’s Office of Alto Amazonas for environmental crimes. Other complaints registered in previous years ended up being shelved, she added.

No land titles, no land rights

Gavancho said they have filed a complaint against the Regional Directorate for Agriculture for granting land titles for rural properties within the community’s forests to individuals who are not community members. Meanwhile, Santa Rosillo de Yanayacu community members are left languishing without a collective title to their own land, Gavancho added. She said this is due to the fact that the communal territory has not yet been fully demarcated.

“I believe that the lack of land titling is the main problem here and that it is driving all the other conflicts in the community,” she said.

Santa Rosillo de Yanayacu was officially recognized in 2015 and is one of 32 communities that are entitled to land titles under a government program called Cadastre, Titling and Registration of Rural Land in Peru. However, sources said the program’s promised benefits have not yet come to pass.

Incursions into Santa Rosillo de Yanayacu territory were given special attention at a November 2021 meeting of the San Martín Technical Titling Board. According to a document signed after the meeting, members agreed “to create an exclusive commission to address the problems of the native community.”

“There have been no big steps forward in the titling process in Santa Rosillo de Yanayacu, despite the fact that a subcommission was created last year specifically to look at this community’s case,” Pérez Ojeda del Arco said.

Santa Rosillo de Yanayacu president Quinto Imuna agreed, adding that he believes the lack of progress on this front shows his community is not a priority for authorities.

“The state is in no rush to grant us land titles,” Imuna said. “If we had them, then we’d have something to lean on. We don’t want any more land invasions or deforestation; we want a dignified life for future generations.”

However, FPP’s Pérez Ojeda del Arco said the situation isn’t due to simple negligence from authorities. He said settlers have taken an active stance against the communal titling process and are prohibiting the Regional Directorate for Agriculture’s employees from entering the area to carry out territorial demarcation.

Wiliam Ríos Trigoso, director of land titling and rural cadastre of the Regional Directorate for Agriculture, said the demarcation process has been suspended due to this conflict. He said that when his team, accompanied by police officers, visited Santa Rosillo de Yanayacu to map its boundaries, settlers — who outnumber the Indigenous population — did not allow them to move through the territory.

“It was not possible [for the team] to work in the area because of the risk posed to their lives,” Ríos Trigoso said. “We cannot intervene and put the lives of the members of the brigade at risk.”

“The Santa Rosillo de Yanayacu case is very complicated, because you have illicit coca cultivation, indiscriminate deforestation and land trafficking all taking place,” he said. “We alone at the Directorate for Agriculture cannot tackle it.”

This story was reported by Mongabay’s Latam team and first published here on our Latam site on Sept. 26, 2022.

Chasing Deforestation is a series that explores the world’s most threatened forests through satellite data and reporters on the ground.Host Romi Castagnino travels to the central Peruvian Amazon...

The EU hopes to finalize its revised Renewable Energy Directive (RED) soon, even as forest advocates urge last minute changes to significantly cut the use of woody biomass...

The Arctic Ocean has grown more acidic at a surprising rate in recent years, three times faster than the rest of the global ocean.Melting sea ice has exposed...

The European Union has agreed to adopt a law that will ban the trade of commodities associated with deforestation and forest degradation.The law will be the first of...

Scientists plead for protection of peatlands, the world’s carbon capsules

As the United Nations Biodiversity Conference begins, a group of researchers from more than a dozen countries are calling for worldwide peatland protection and restoration for the protection...

Opinion: It's not just farmers who are feeling the squeeze