How to retrofit old sprayers with automatic section control


Few people who have had a sprayer with auto-section control would consider going back to manual boom switching.

Not only do these systems improve spraying accuracy and reduce overspray, but they make life easier for the operator, removing the need to guess the appropriate time for switching sections on and off.

This frees up time for concentrating on other parts of the job, such as monitoring boom height, keeping an eye out for blocked nozzles, and inspecting the crop.

Most new sprayers come with auto-section control as standard these days, but there are still plenty of manual machines out there.

The good news is that this technology can be retrofitted to most crop sprayer models and it shouldn’t break the bank.

As a bonus, some farmers will be able to access grant funding to make the cost more bearable.

Because auto-section control can function adequately on the free Egnos GPS correction signal, there are no ongoing subscriptions to pay either.

To find out what’s involved, we enlisted the help of Chris Nye, service engineer for Gloucester sprayer specialist Severn Agriculture.

He has fitted systems to all manner of older sprayers, from self-propelleds and demounts to trailed and mounted.

How does auto-section control work?

All auto-section control systems use GPS to work out the precise point at which sprayer boom sections should be switched on and off to minimise overspray and avoid any misses.

They know how to do this as they record all the twists and turns of the field boundary while the headland is being sprayed.

Then, as boom sections pass over a portion of the headland that has already been sprayed, the system will switch it off.

As unsprayed areas come into view, the nozzles will automatically come back on. The more sections there are on the sprayer, the more accurate this switching will be.

The system will also help reduce overspray in the body of the field, particularly if the drilling has been overlapped and the tramlines are too narrow.

Assuming the sprayer already has a compatible rate controller, the only components required to make it work are a simple GPS receiver and screen, plus an auto-section control box.

Can all sprayers be converted?

Almost any sprayer can be retrofitted with auto-section control – self-propelled, trailed, mounted or demount – but some will be more challenging than others.

Models with 24m booms are the most common to receive an upgrade, but systems can be fitted to sprayers of all sizes, even down to those mounted on UTVs.

If you’re lucky, your machine will already be attached to a GPS system and have a rate controller that is capable of doing auto-section control.

Occasionally, this means an upgrade is as simple as buying a wiring loom or unlocking features in the display.

Others will be more complex and might involve swapping some components to make the system work. Calling a specialist and telling them what you have is the best way to work out what you need.

The process is also simple for those who have no GPS, as a whole setup can be installed from scratch with no compatibility problems.

Which system should I get?

The most suitable system will depend on the type of equipment already fitted on the sprayer.

Most rate controllers will be compatible with one or more of the auto-section control kits on the market. But even if they’re not, it isn’t overly expensive to upgrade the rate controller.

Severn Agriculture works with a lot of Frazier/Kellands Agribuggies, which are fitted with RDS rate controllers, and these readily accept Teejet’s Boompilot kit.

Where they need to fit a new rate controller, they’ll often use Arag’s Bravo setup, which comes with a complete system for controlling the sprayer.

How is it installed?

Severn Agriculture begins most installs with a visit to the farm to suss out the sprayer, see how it is used and work out which equipment will be most suitable.

For a 24m boom, at least seven sections will be required to give a suitable level of accuracy, so sprayers with fewer sections than this will usually have additional ones added.

This is achieved by fitting extra valves and making the necessary adjustments to the pipework.

If there are plenty of sections available, it can be worth putting the two outer nozzles on their own.

These can then switch off when spraying the body of the field to take any drill overlaps into account.

The auto-section control module will then be wired into the rate controller and connected to the GPS screen.

The correction signal for this comes from a roof-mounted receiver running off a free Egnos signal with 20-30cm pass-to-pass accuracy, which is ample for the application.

One of the most involved jobs is calibrating the system so that the timings of the sections switching are spot on.

If this is done incorrectly, there can be more overspraying than is necessary or some unsightly missed triangles where the runs meet an angled headland.

Typically, the sprayer is filled with water and marker is used to work out when the spray comes out relative to when the sections are switched on.

Once this process has been completed, there is no need to adjust the settings, unless speeds are changed dramatically or the operator switches to using forward- or backward-facing nozzles.

If they vary their applications significantly, they might have separate calibration figures for each.

Is it difficult to use?

Some operators are concerned that auto-section control will be difficult to use and that it makes the machine unnecessarily complex.

However, the fact that it works automatically means the sprayer is considerably easier to drive.

It will even work without pressing any buttons on the GPS screen, although most operators will want to do this so that they can see the area they’ve sprayed being painted in on the map.

The fact that these systems often piggyback off the standard rate controller means they don’t significantly alter the way the machine operates, either.

Plus, they can usually be bypassed if they do give any trouble.

How much does it cost?

Prices vary considerably depending on the type of sprayer and equipment already fitted. However, it should be possible to have a fully functioning system fitted from scratch for about £5,000.

Accessing grant funding from water companies, or national schemes such as the Farming Investment Fund could help reduce the bill considerably.

What else can I do to improve the accuracy of my sprayer?

Once GPS auto-section control is fitted, it should also be possible to upgrade to an auto-steer system.

Many older self-propelled sprayers have simple steering setups, so an auto-steer valve can usually be plumbed in, leaving the original steering wheel in-situ.

For tractors that are not auto-steer ready, it might be simpler to fit a steering wheel motor.

Although entry-level systems running on Egnos won’t be accurate enough for spraying in tramlines, they’re plenty good enough for grassland and remove the need for the operator to follow a lightbar.

Another worthwhile modification is fitting a boom recirculation system. This means the tank contents is always flowing around the boom, so when sections are switched on chemical is available almost instantly.

This process is relatively simple if the sprayer or tractor already has a compressor on board, but costs go up when these need to be fitted.

Keen to improve the accuracy of his spraying operations, Worcestershire mixed farmer James Kent decided to invest in a retrofit auto-section control system, which was installed by Severn Agriculture.

Initially this was fitted to his Frazier Agribuggy 5D, but it suffered fire damage shortly after and the system was transferred to a newer 1999 Phantom. 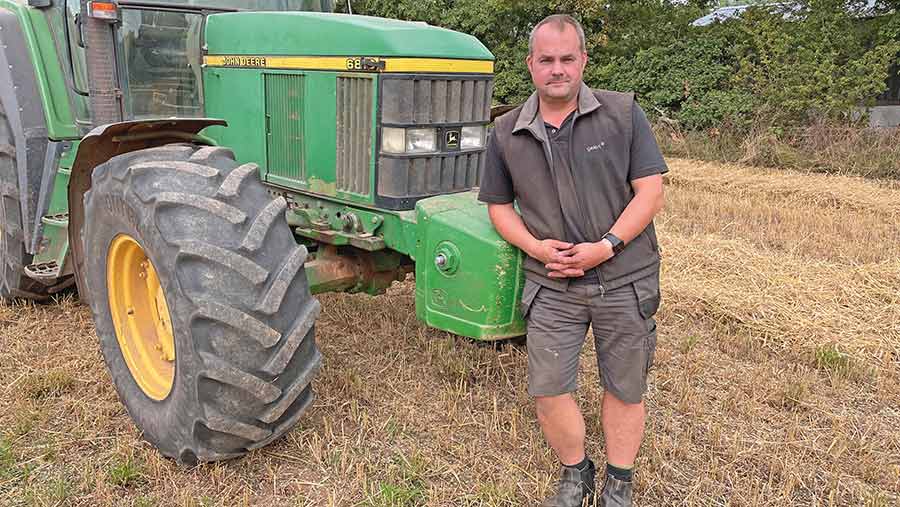 This machine is powered by a 2.5-litre, four-cylinder, Land Rover 300 TDI engine mated to an automatic transmission and transfer box that delivers permanent four-wheel drive.

As for the spray pack, this has a 1,500-litre tank, 24m aluminium boom and, prior to the auto-section control system being added, five manually switched sections.

To give greater accuracy, two additional solenoid valves were added, along with extra switches on the control box.

This means the boom now has five 4m centre sections and two 2m sections on the break-backs. 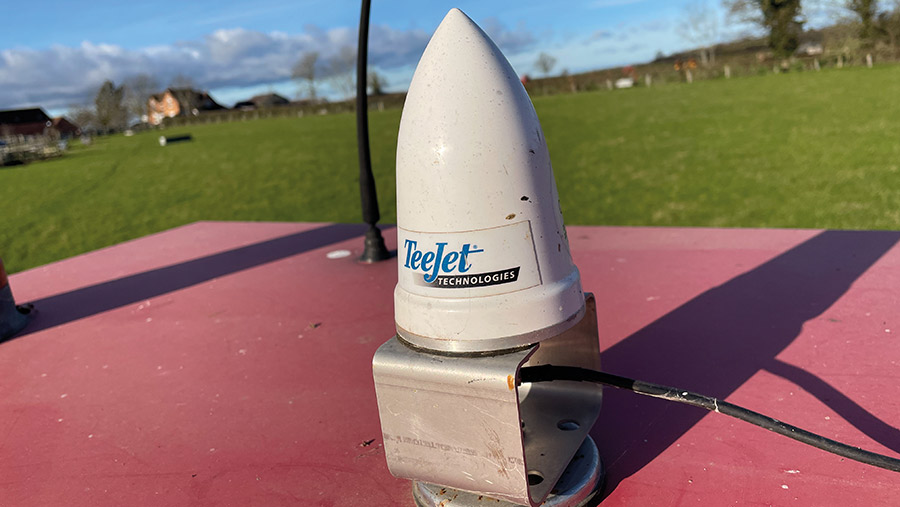 A Teejet Boompilot automatic section control system was chosen, as this is compatible with the sprayer’s standard RDS rate controller.

This meant the only components to be installed in the cab were a Matrix Pro 570GS GPS unit and a section driver module.

As the sprayer’s original rate controller and section switches are still in place, it can be operated manually if required.

However, since it has been fitted, Mr Kent has only used it in auto. 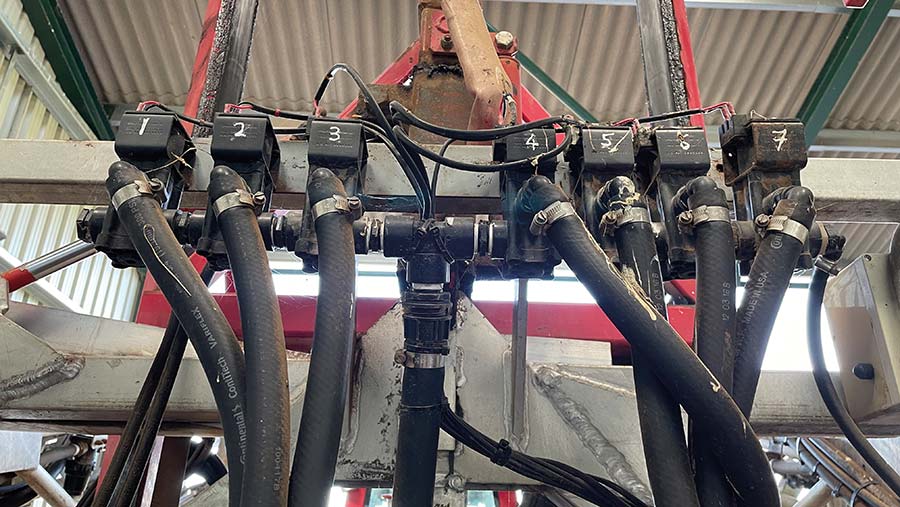 “The initial appeal of the system was that it would make our spraying much more accurate, but the fact that I don’t have to think about boom switching means the job is a lot more straightforward,” says Mr Kent.

“Once I’ve sprayed the headland, I can let it do its thing and turn my attention to the crop and looking out for blocked nozzles – I definitely wouldn’t want to go back.”

The price to have the full system fitted was about £5,000 and he received £2,500 from a Severn Trent Steps grant to cover half of the cost.

Severn Agriculture calibrated the system as part of the installation, but he has played around with the delay settings for the boom so that it switches exactly when he wants.

“The only thing I wish we’d done is make the outer sections 1m rather than 2m so that there is a bit less overspraying.” 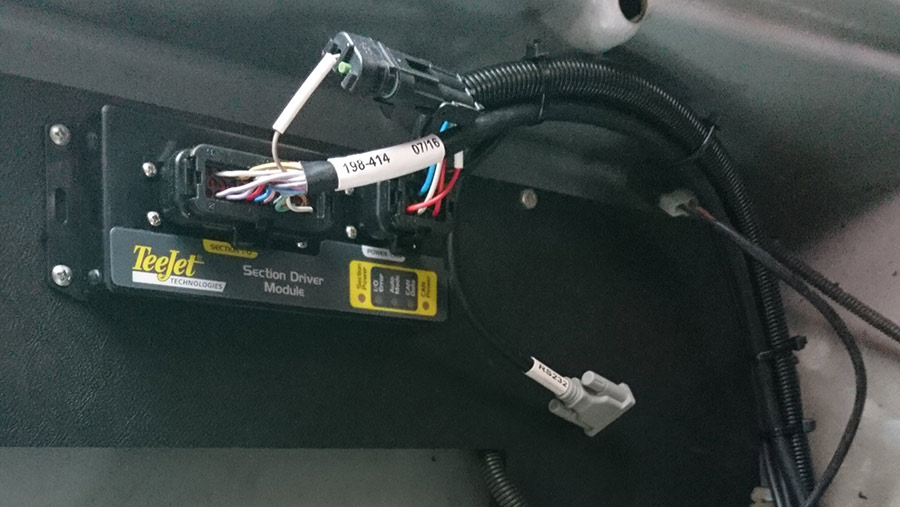 How agtech can help solve the challenge

How agtech can help solve the challenge