How to fix farm tracks with an adapted road grader


Bouncing along potholed farm tracks is an unpleasant business, putting unnecessary strain on tractors, implements and their operators.

But with input costs through the roof and margins tight, shelling out large chunks of money to repair unmetalled road surfaces isn’t an appealing prospect for most farmers.

Since then, he has been working to make the process of getting roadways into good order as quick and cost-effective as possible, without compromising on the quality of the job.

While many track repair firms use rippers and power-hungry crushers to pull up good stone and crush it, his primary tool is a heavy-duty, self-propelled grader, which he modified to be towed behind a tractor.

The strength and weight of this machine allows him to cut into a track to profile existing stone into a new surface.

“I’m not really a fan of crushers, as you break up a lot of the load-bearing material, which can take the structure out of the track,” he says.

“With the grader, I can generally leave that in-situ and work with the finer material on the top to give an even, graded surface.”

A wide array of adjustments on the 12ft blade gives him the ability to redistribute material quickly and add various cambers without having to use a digger.

Its dexterity can also be put to good use, peeling weeds and soil away from the surface, as well as dragging good, usable stone back in from the sides.

Providing a track has a reasonable amount of stone in its construction, Mr Bradwell can usually get it back into a smooth surface without having to bring in extra material.

When a top-up of stone is required, he tries to be as economical with it as he can.

As an added service, he usually works with a powerful magnet mounted on the front linkage that will pick up nails, screws and other ferrous metal detritus that have the potential to skewer expensive tyres.

For roadways in particularly poor condition, Mr Bradwell has a few other pieces of equipment that he can bring into play.

One is a JCB Hydradig – a 360 excavator on wheels with a 40kph top speed – that he can use where major landscaping needs to be carried out, such as raising the height of a section of road.

It is also employed for loading his trailed gravel cart, which is used when he needs to add some extra material to a track.

This can be large stone for building up the base of soft sections, but it is more often fine material that will be graded across the surface to give a fine finish. 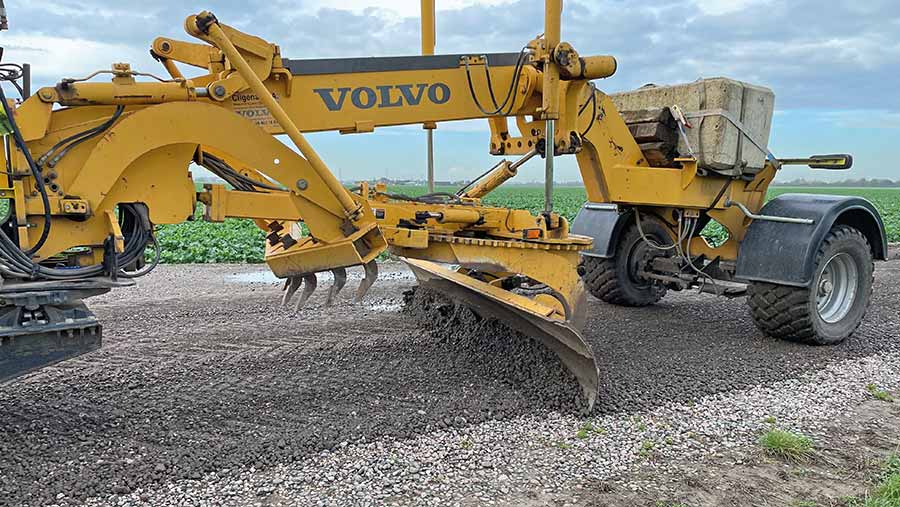 For tracks built with a deep layer of fine stone, he has both a 10t vibrating roller and front-mounted compaction plates that can be used to consolidate the surface.

This process seals the top and reduces the risk of ruts and potholes forming.

Almost all of Mr Bradwell’s work is on existing roads but he can build new ones if required. The grader is invaluable for this job, allowing him to peel away the topsoil, leaving an even, solid surface to start building the track.

Generally, he recommends scraping about 150mm of soil, leaving it at the sides of the roadway to form a retaining bund.

A minimum 250mm of coarse base material can then be added, before a 50-100mm top coat of fine road planings or, as is popular in his area, slag from the steel works at Scunthorpe.

Prices for having a track restored range from £1.50-£3.50/m, depending on what sort of condition it is in.

This covers the cost of his time, equipment and fuel, but not any additional stone that needs to be added.

As unmetalled tracks are made from loose material, they do need care and considerate use to keep them in good condition after restoration (see “Andy Bradwell’s farm track dos and don’ts”).

This includes the removal of any soil build-up and a light grading of the surface to pull stone back in from the sides and remove any potholes that might be starting to form.

For this he charges a day rate, in which time he can cover 1,000m or more.

Some customers that have large amounts of high-speed traffic on their tracks will call him in to give the surface a tune-up every season, but most will give several years of service before any work is required.

Andy Bradwell is now on his third grader conversion, which is based on an old Volvo self-propelled model that he imported from a breaker in Spain.

This type of machine isn’t popular in the UK, so he had to go further afield to find one that suited his needs. 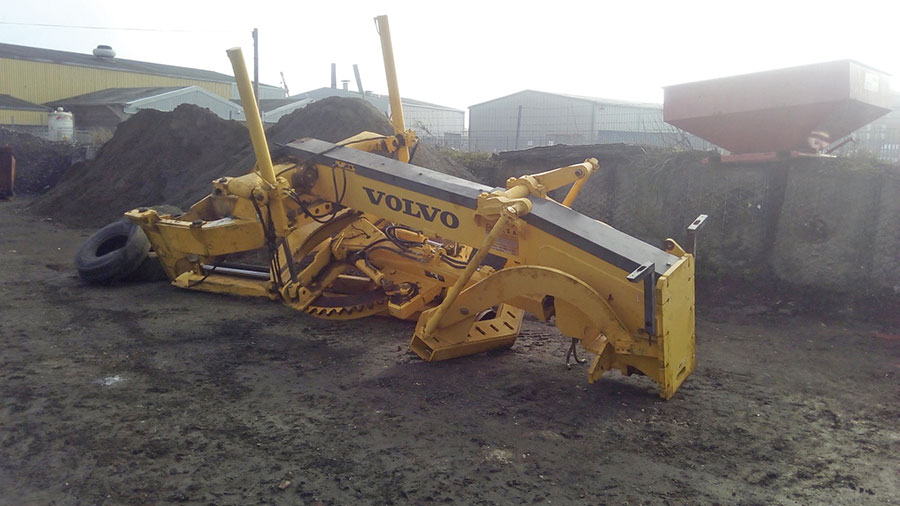 In their original format, self-propelled graders have an articulated chassis, with an engine unit at the rear, cab in the centre and the blade assembly mounted just in front of this.

The breaker had already removed the engine unit and fire-damaged cab, so Mr Bradwell just took delivery of the front part of the chassis, grader blade and hydraulic rams.

To make it work as a trailed machine, the front wheels were removed and replaced with a frame that attaches to the three-point linkage.

In order for the machine to turn, he also incorporated a swivelling fifth-wheel plate complete with nylon wear plates. 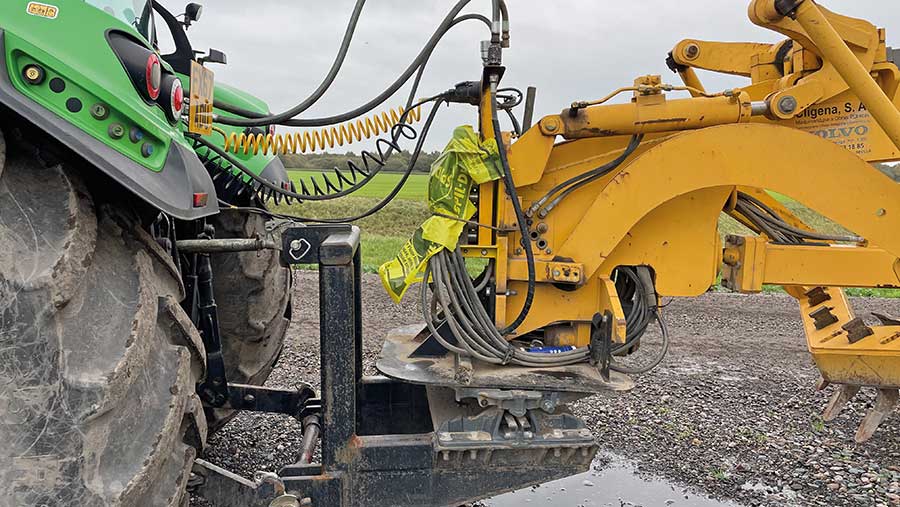 Having a more rigid connection to the tractor is a significant upgrade from the simple drawbar used on his first two graders, giving him much more control of the machine.

Coupled with a commercial hydraulic steering axle at the rear, he can place the blade exactly where he wants and negotiate it into some tight spots.

The rear wheels sit below the original cab mounting platform, which is now home to a large concrete ballast block.

Weight is essential for pushing the blade into hard road surfaces, so he fitted the biggest one he could.

With more than 10 hydraulic functions to operate, Mr Bradwell sourced a bank of electro-hydraulic spool valves that run off the load-sensing hydraulics of his Deutz-Fahr 6185TTV. 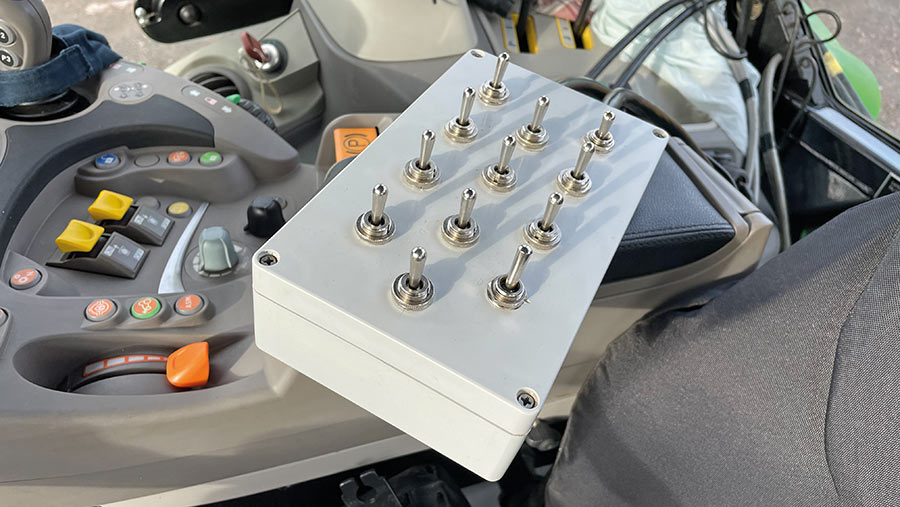 This is mounted on the front of the machine with a home-made control box in the cab.

Operating it isn’t for the uninitiated as it has a bank of 12 unlabelled toggle switches.

“It’s second nature to me now, but it takes a while to get to grips with what they all do – I guess it’s a bit like playing the piano.”

Whether humans can survive climate change is the wrong question (commentary)

Whether humans can survive climate change is the wrong question (commentary)