How four square metres of cropping could boost your farm profitability

by agrifood
in Markets
Reading Time: 4 mins read
A A
0
Home Markets
Share on FacebookShare on Twitter


A national trials programme involving 50 arable producers up and down the country is encouraging growers to leave just 4sq m away from the fertiliser spreader so they can get an accurate assessment of their nitrogen fertiliser use efficiency (NfUE).

“If you really want to know how effectively your nitrogen fertilisers are being used you need to start by knowing what happens to your production if you don’t use any,” explains CF Fertilisers head of agronomy Dr Sajjad Awan.

“NfUE is the critical measure of how much of every kg of nitrogen fertiliser you apply actually ends up in the plant where it can stimulate growth rather than getting lost from the system.

“It’s expressed as a simple percentage with the higher the value, the more N is finding its way into plants and in a UK wheat crop it’s typically in the range of 50% to 80%.

“But an NfUE of 50%, which does exist in some situations, means for every 1kg of nitrogen you buy, half of it is effectively not being utilised and that’s a not a good result for the environment or your farm’s profitability.”

The ongoing trials programme, being carried out by CF Fertilisers in conjunction with Agrii and Frontier, represents some 20,000ha of UK wheat production across the country and the first year of trials has already shown some very interesting results, he says.

“NfUE can be influenced by a number of factors including how good your soil testing is, the type of fertiliser you apply, how often you apply it and of course, how much you actually put on.

“Ammonium nitrate (AN) fertilisers typically achieve the highest NfUEs as they minimise loss of N to the atmosphere, but it’s becoming increasingly apparent how important the accuracy of the soil testing you use is. 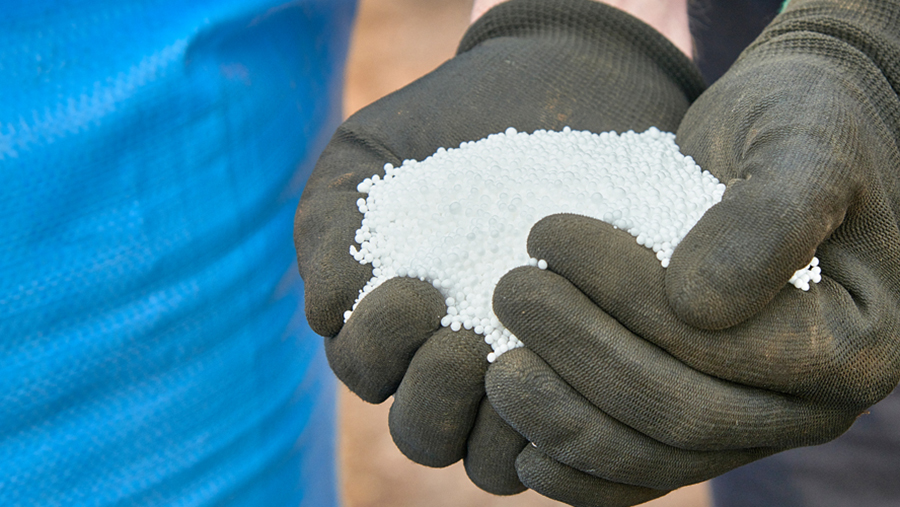 “CF N-min soil tests produced a level of accuracy approaching 80% whereas with estimates of soil mineral nitrogen (SMN) this was just 45% and as low as 33% for RB209-based soil nitrogen estimates.”

This accuracy of soil analysis combined with encouraging the growers taking part in the trials to adopt some basic nitrogen management principles have translated into significant performance improvements (see table below).

Why 4sq m is important

Leaving a patch of land free of any fertiliser applications is key in accurately establishing NfUE, Sajjad Awan says.

“The vital knowledge we can gain from understanding more about NfUE hinges on being able to remove all other nitrogen sources from the more commonly used nitrogen use efficiency (NUE) calculation.

“At the optimum N application, we’re looking at the amount removed by the crop (grain and straw) minus that would have been taken up if no nitrogen fertiliser had been applied.

“This is where the 4sq m comes in. You can simply place a tarpaulin over your desired patch whenever fertiliser spreading takes place and this ensure your ‘Nil-N’ plot receives no fertiliser application through the season.

“The nitrogen content of the grain and straw from this plot can be compared to that of the crop where the full application has been used and, working with your agronomist or FACTS qualified adviser, you can use this to calculate relative Nitrogen uptake by the crop and establish your NfUE.”

NUE is important in understanding how all your nitrogen sources contribute to crop production but only NfUE can help you make the right fertiliser choice and help you fine-tune your management, he says.

“That 4sq m of land that has no fertiliser applied could be the start of thinking completely differently about their future Nitrogen management for many UK growers, as we hope our ongoing NfUE trials will continue to show.”

Tips for Outdoor Round Bale Storage

Agricultural groups have issued support for the CREAATE Act and its purpose to support further development of export markets. The Cultivating Revitalization by Expanding American Agricultural Trade and...

Agronomy and distribution business ProCam doubled its pre-tax profits to £14m during 2021. The net operating margin – profit before tax as a percentage of sales – also...

USDA Funding for International Projects. That’s coming up on This Land of Ours. McGovern-Dole Food for Education ProgramCourtesy of USDA Foreign Agricultural Service The Department of Agriculture will...

Tenants have been given an assurance that their landlords cannot apply to Defra’s Lump Sum Exit Scheme, after reports that some new tenancy agreements have included clauses prohibiting...

Mzansi Meat on being a global foodtech with African roots