Pulse-width modulation has been a topic of enthusiastic conversation among keen sprayer operators, but one farm hopes to get plenty of the benefits without such a steep up-front cost.

Arable business HA Day and Sons has been steadily evolving its sprayer setup over the past 15 years and its most recent update is an Altek Smart-C-Spray 124 system.

Like PWM but without limits on nozzle choice, the technology has significantly increased the accuracy of the firm’s Househam Merlin self-propelled sprayer.

See also: Pulse-width modulation spraying – is it worth the money?

Since GPS guidance was introduced, many crop producers have been taking advantage of the improvements in sprayer accuracy it can provide, mainly to try to keep a lid on increasingly costly chemical bills.

The natural evolution from manual section control was adopting a GPS-controlled equivalent, which takes pressure off the operator, reduces overlap on headlands and slows operator fatigue.

However, James Wilson – who runs HA Day and Sons alongside his father, uncle and two cousins – tells Farmers Weekly that the business skipped that step and went straight to individual nozzle shut off more than a decade ago.

One of its previous Househam sprayers was kitted out with the solenoid-controlled Smart Nozzle from German manufacturer Altek International.

The firm developed the twin line, single-nozzle GPS shut-off system in conjunction with US company Harrison Ag Technologies, and it was run through an Android tablet, so considered way ahead of its time.

“A lot of people questioned the need for individual nozzle shut-off back then, as most were only just getting into standard section control.

“We were an early adopter and made massive savings on chemicals. It worked out about 17% less compared to manual operation.”

The Smart Nozzles survived across two of the farm’s sprayers until it invested in its current 24m, 4,000-litre Househam Merlin in 2016.

At this point, it was decided to upgrade the sprayer’s system in readiness for advances in variable-rate application, so instead of Smart Spray on two lines, Mr Wilson opted for four lines with Multi-Spray Direct Control Quad nozzle bodies.

Now operated using software programmed by Danish company Lykketronic on Househam’s own terminal, it has run smoothly and provided many additional features to improve sprayer efficiency, with more in the pipeline.

At present, the operator can quickly and easily toggle between four nozzles manually on the touchscreen, choosing the most appropriate tip for target rate, forward speed, application type or conditions.

However, Smart-C-Spray is capable of variable-rate application at each outlet and unlocking this feature is Mr Wilson’s eventual aim.

When enabled, the system will automatically switch to the appropriate nozzle or combination of nozzles for the desired rate at any given moment.

It’s this aspect that he sees as the greatest advantage of Altek’s system over pulse-width modulation kits offered by some manufacturers, which are also capable of varying rate at each outlet.

PWM systems are tied to a single nozzle type, whereas the Smart-C-Spray is compatible with any conventional nozzle, including air induction, so can help the operator mitigate any drift risk.

Another advantage, says Mr Wilson, is the Canbus-controlled pneumatic opening and closing of valves with the Altek Smart-C-Spray. This leads to much less power draw than the PWM system, which relies solely on electronics.

As a result, there’s less wiring and a relatively light load for the booms which, combined with the modular nature of the “daisy chain” configuration, means fault finding is straightforward.

“We try to fix most things ourselves. I’m sure you can do that with PWM, but this seems much simpler from the research I’ve done,” explains Mr Wilson.

He adds that there aren’t many sprayer manufacturers offering PWM and the cost is significant on top of a new machine.

“For us, the Altek system was a more cost-effective and flexible option. It can also be taken off this sprayer and retrofitted to the next one, so we could keep it if we wanted to.”

The use of mapping features in the system’s Lykketronic software has also proven itself to a useful tool in fighting blackgrass.

This was demonstrated during the last cropping year, when the legacy of the wet winter meant establishment was poor in some fields.

Where winter wheat was thin or non-existent, blackgrass had gained a foothold and was present in high numbers in the spring.

A drone was used to take aerial imagery of the problem fields, allowing maps of the poor patches to be drawn up and the resulting shapefiles uploaded to the sprayer’s control unit.

With automatic individual nozzle control on 50cm spacings, it was then possible to accurately spray out the poor patches with glyphosate with minimal damage to any healthy crop.

Mr Wilson says, in the end, only 33% of the field was sprayed out due to the accurate mapping and automated application, so weed destruction was maximised with minimal crop loss.

“In one particular field, we’d have either lost all of it because it would have been so difficult to patch spray, or it would’ve been left to set seed, creating a mess for the following season,” he adds.

The system not only helped save a good crop and prevent blackgrass seed return, but by flipping the maps, Mr Wilson only sprayed the remaining spring inputs where they were needed on healthy crop.

In hindsight, he wishes the decision to spray poor patches off had been made earlier, as he would have saved on fungicide that was blanket applied across affected fields.

“As it was, we saved on the final fertiliser dose in those areas. Now we know we have that ability, we will use it more effectively in the future.”

The combination of mapping and automatic individual nozzle control has also provided a benefit around boundaries, with margins established on all the farm’s fields.

The system accurately ensures no chemical is applied on these areas if a boom accidentally sweeps over the set field boundary. The software also allows easy editing of boundaries if necessary.

As it was the first in the UK to have the system fitted, it is missing some key features, including variable-rate control at each outlet.

Enabling this feature will unlock what is dubbed “high definition” variable-rate application, rather than simply across the entire boom or boom sections, and is particularly useful for fertiliser applications.

It also enables Altek’s “True Turn” turn compensation feature, which prevents under or overdosing when the sprayer is turning during application.

It uses GPS to work out how tight the vehicle is turning, then computer algorithms calculate the speed at each nozzle and adjust output to maintain the target rate.

All that is required is a simple software update to unlock these features, but Altek says it is now standard on all Smart-C-Spray systems.

“We need to optimise fertiliser use in particular, but I’m conscious that the data that we put into the machine has to be good,” says Mr Wilson.

With the lower resolution and reliability of satellite imagery, this means the farm will potentially look to invest in a fixed-wing drone with high-resolution sensor to maximise the benefits.

“If you use a satellite image with 24m resolution, you’ve lost the advantage of having a system that can variably apply at 50cm. Drone image quality is a different level.”

The Altek system does require a good understanding of computer systems and may get more complex as more products are applied using the variable-rate function, because it involves more crop data management and map creation.

The necessity for this skillset among the farm staff is a consideration for those looking to adopt the technology.

However, the farm’s sprayer operator, Cookie, has been working in farming for more than 50 years, predominantly without computer technology, and has been able to work the system out quickly for competent day-to-day operation.

Mr Wilson says this is testament to the intuitive and user-friendly nature of the controls.

Since having the first UK system fitted in autumn 2020, there have been no issues with any of the hardware and only one or two software niggles that have been remedied thus far.

“They have been very minor and I can’t fault the support we’ve had from Altek in sorting them out.” 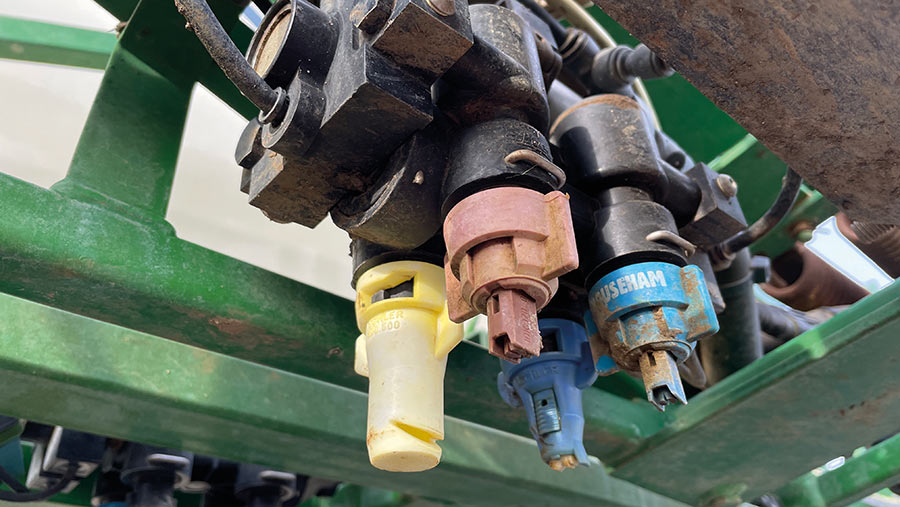 These INCs control Altek’s Multi-Spray solenoid valves across the boom and can be daisy-chained together to control more than 55 valve units, so capable of operating across most modern boom widths.

What are its key features? 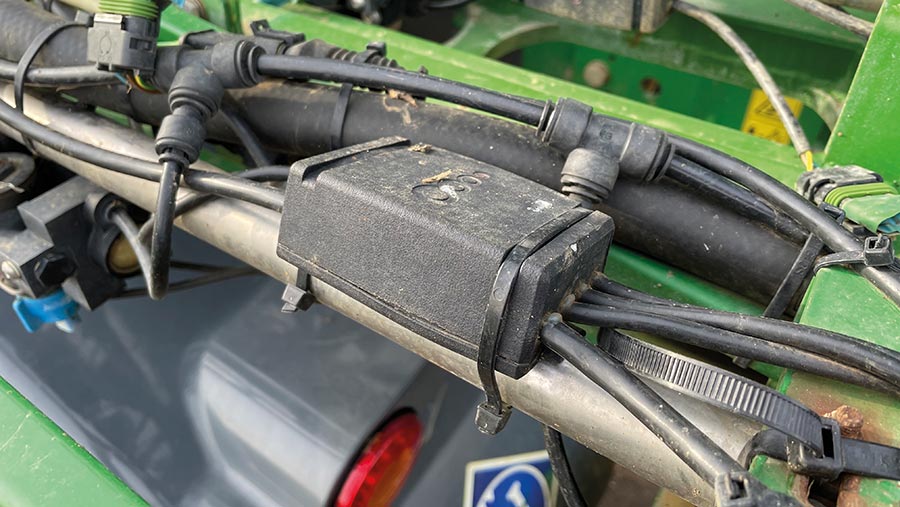 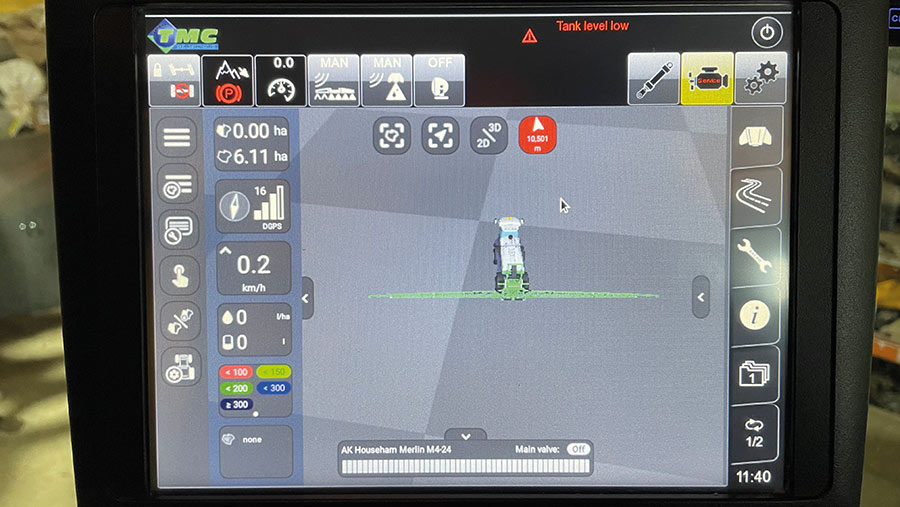 A list of agrifood corporate climate commitments to hold them accountable