by agrifood
in Machinery
Reading Time: 10 mins read
A A
0
Home Machinery
Share on FacebookShare on Twitter


There were lots of clever inventions to make livestock jobs easier entered into our Inventions Competition.

Here’s a round-up of some of the highlights.

See also: How to build the perfect livestock fence 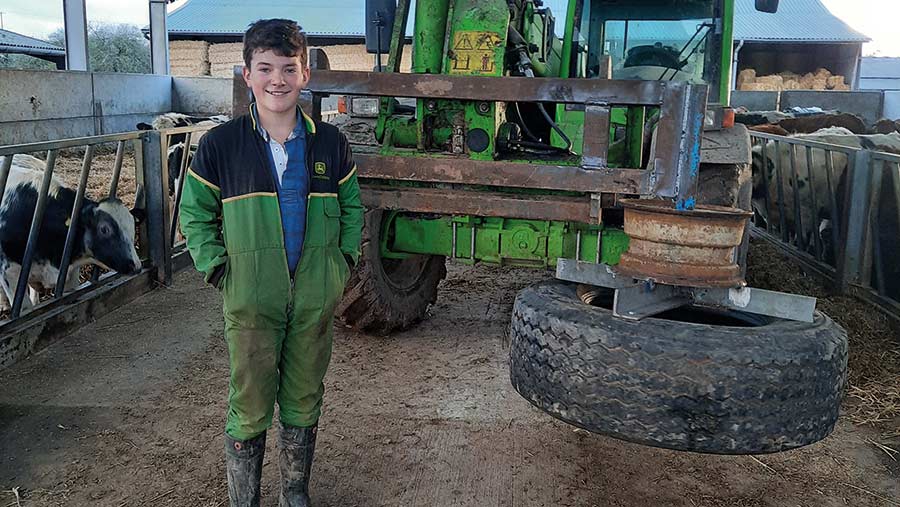 After seeing a similar bit of kit on a local farm, 13-year-old Rhys Edwards, of Ledbury, Herefordshire, made a silage pusher to help when feeding his family’s herd of 220 beef cattle.

Rhys used scrap materials from the workshop, and welded an old stub axle onto an 80mm box frame.

He completed the measuring, cutting and nearly all of the welding himself, with a little bit of help from local engineer Richard Tooby.

The only items purchased for the project were a set of Merlo brackets and a tin of paint, which cost £130.

Gloucestershire farmer Dan Hicks has made a neat hopper and auger combination for feeding rolled grains to his cattle.

Prior to this, he was having to bag up feed and cart it to them by hand, which began to wear thin.

He managed to find the complete chassis and hopper arrangement for sale in the classifieds, but it needed some modifications, such as adding a slide on the base for controlling the flow.

He fills the hopper with the loader bucket, which saves any manual lifting.

The auger used to wind feed into troughs cost about £1,500 and was originally designed for loading drills or fertiliser spreaders out of trailers.

This meant it came with a small reception hopper that could be fed from his larger tank above, and it had a length of pipe to direct the feed to the right place.

The auger is run off the tractor spool valve and Mr Hicks has adjusted the oil flow to get it running at the correct speed. He’s also worked out the best forward speed to travel at to get the right amount of feed to each animal. 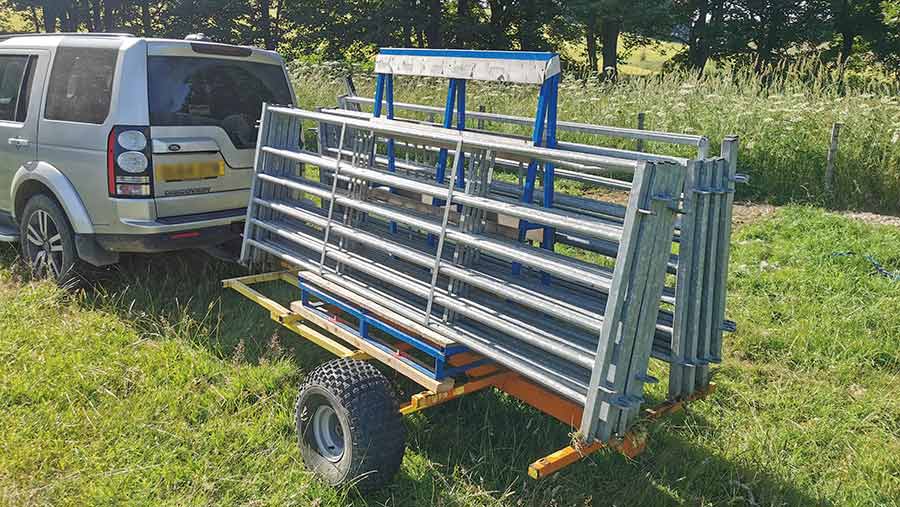 With 650 ewes spread over 20 fields and a 19-mile radius, he needed a way to transport the 9ft gates and frames used to set up mobile races when worming, clipping and weighing.

Mr Fraser’s design had to be strong enough to carry the gates and lamb weighing crate, but light enough to be towed by the farm’s Yamaha UTV.

He decided to use an old ATV forestry trailer as the base, sourcing one from a neighbouring estate for £200.

He removed the sides and bolted on a second-hand stillage – a £175 find on Gumtree – in the middle. This means the gates rest on a slight angle, so they don’t fall off once they’re unstrapped.

Total costs ran to £375 for the trailer, plus £700 for a set of gates from Glendale Engineering. These can handle about 200 sheep when set up against a fence.

He can now head out with everything he needs in one trip – UTV, sheepdogs and handling race – rather than swapping between tractor and buggy. 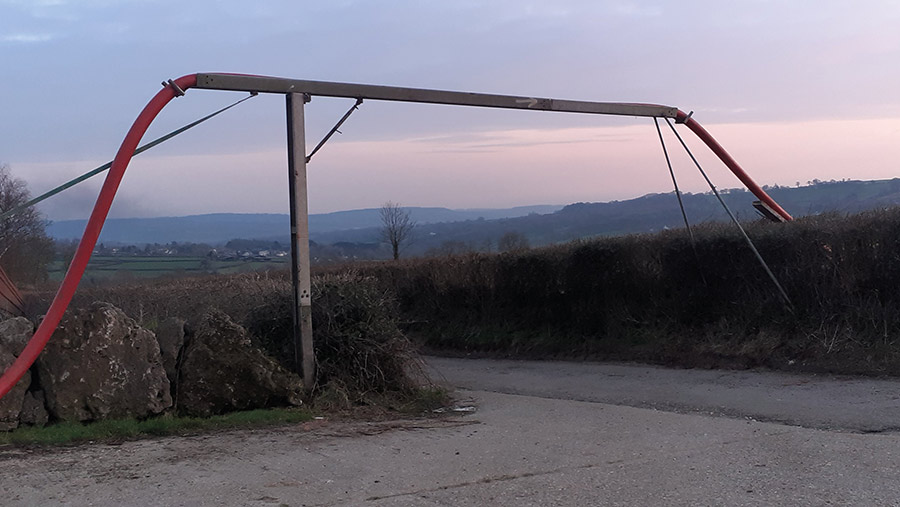 Trevor Johnson, from Axminster, Devon, returned to this year’s competition with a bridging system for routing 5in umbilical slurry pipe across a road.

It was constructed from two-and-a-half lengths of highway crash barrier, part of which was driven 1.5m into the ground to form a permanent attachment point.

The upper section bolts to it using the original barrier joining brackets, and the horizontal section is strengthened using a turnbuckle-style brace.

It is 3.75m tall and stretches 7.5m across the carriageway, with guides at either end to protect the pipe. 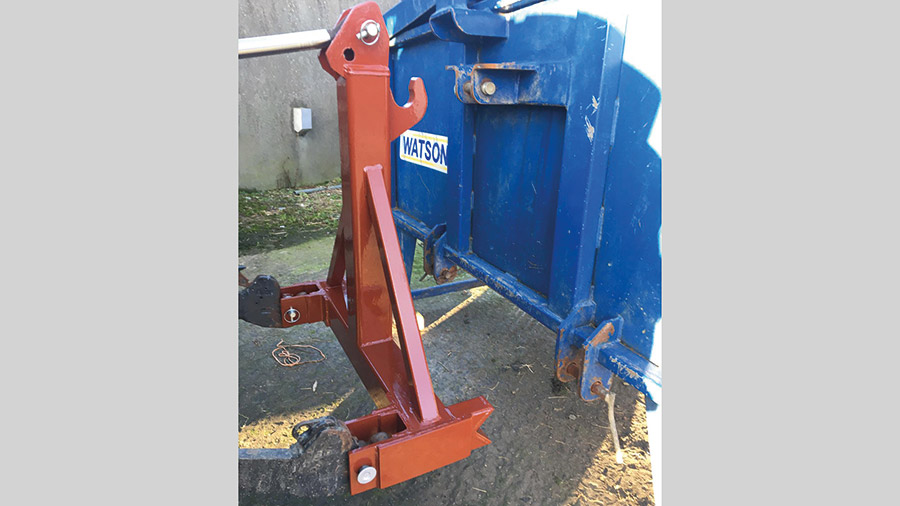 Moving calf creep feeders around autumn grazing sites is no longer such a chore for Gareth Spiers, from Castlewellan, Northern Ireland, thanks to his home-made quick-lift linkage.

The assembly mounts on his tractor’s three-point linkage and works in similar fashion to a hook-lift trailer.

The main A-frame was made from thick-walled 100mm box section, salvaged from a scrapped sheargrab, to which he grafted a hook from a telehandler attachment.

Once fixed to the top pin of the feeder, it can be retracted using the tractor’s hydraulic top link.

This, in turn, pulls the lower two pins snug against angle iron jaws on the linkage – making it easy to pick up and drop down on uneven ground. 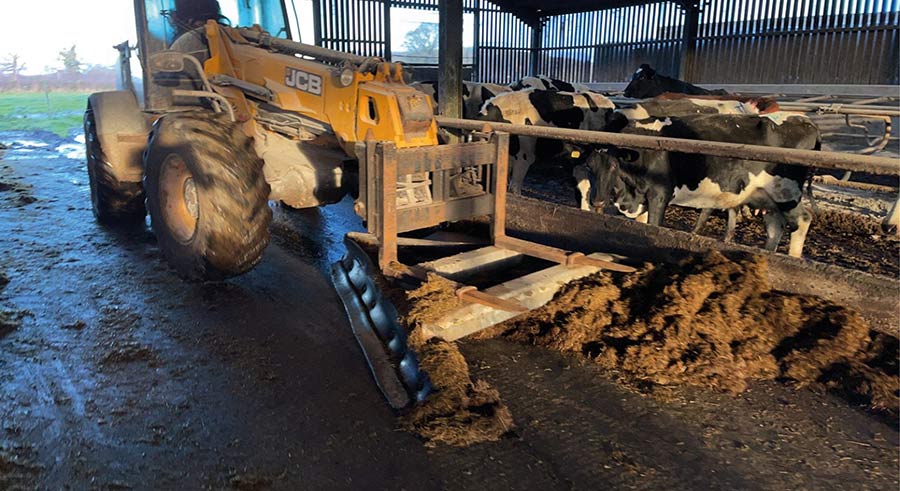 Beef and dairy farmer Philip Harding, based near Chester, Cheshire, has saved 20 minutes each day, thanks to a dedicated V-shaped silage pusher that can be picked up with the forks of his telehandler.

Components included a length of reclaimed crash barrier, which he chopped up to brace the two used tractor scraper rubbers, and box section sleeves to fit the forks of his JCB pivot-steer – all of which came to less than £100.

He uses it a few times a day to push the silage up against the feed barrier. Then, once a day, he picks it up the other way round to collect the silage, which is fed to the dry cows on the other side of the shed. 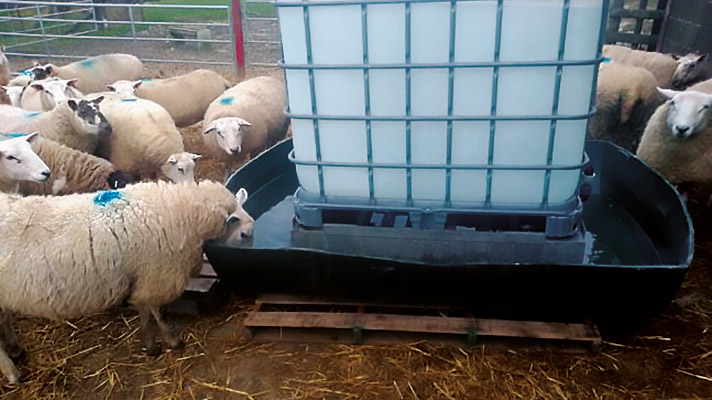 Filling up drinkers devoid of a running water supply is no longer a problem for Meredith George, who farms on the Pembrokeshire coast.

Instead, he built a frame that sits inside a big, square trough, onto which he can place an IBC full of water.

A ball valve controls the water level in the tray or trough, therefore topping it up whenever it gets low.

When the IBC is empty, he simply replaces it, or takes it away to refill. 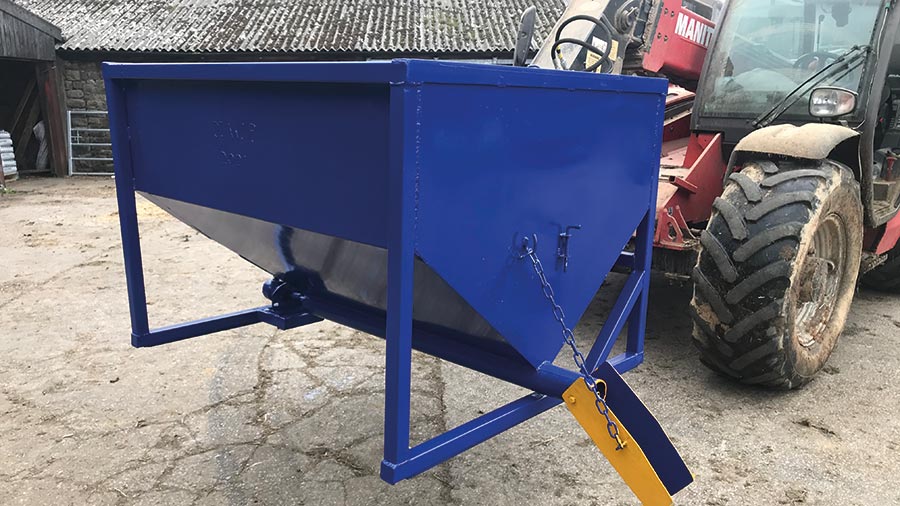 Lancaster farmer James Park built an auger feeder attachment for his Manitou telehandler, which has helped save time and labour when feeding a protein blend to his 120 beef store cattle and dairy heifers.

Having previously trudged alongside the troughs with a wheelbarrow and bucket to throw the blend on top of silage, Mr Park decided to mechanise the process.

He made the hopper from folded steel with sloping sides to prevent bridging, and the auger was taken from an old feed bin system.

This is housed in a steel pipe with a full-length slot to allow the material to flow in.

The hopper is mounted off-centre to accommodate the drop-down chute from which the blend is dispensed. Auger speed and, therefore, output is controlled by an inline hydraulic valve. 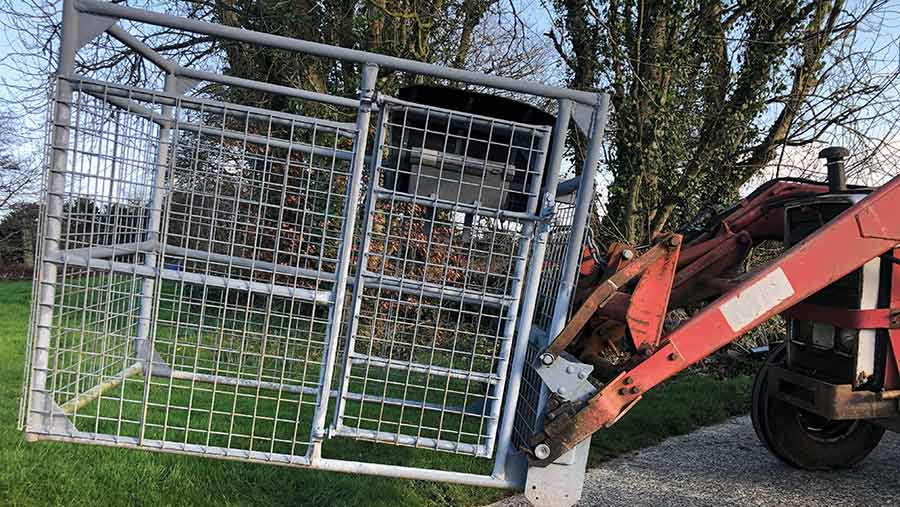 To help keep him safe when ear-tagging field-born calves, Norman Perkin made a loader-mounted portable cage.

In the spirit of recycling, Mr Perkin constructed the calf cage with materials that were destined to be scrapped.

Second-hand steel pipe was repurposed, along with weld mesh and an old toolbox that is used to hold the tags and tools. 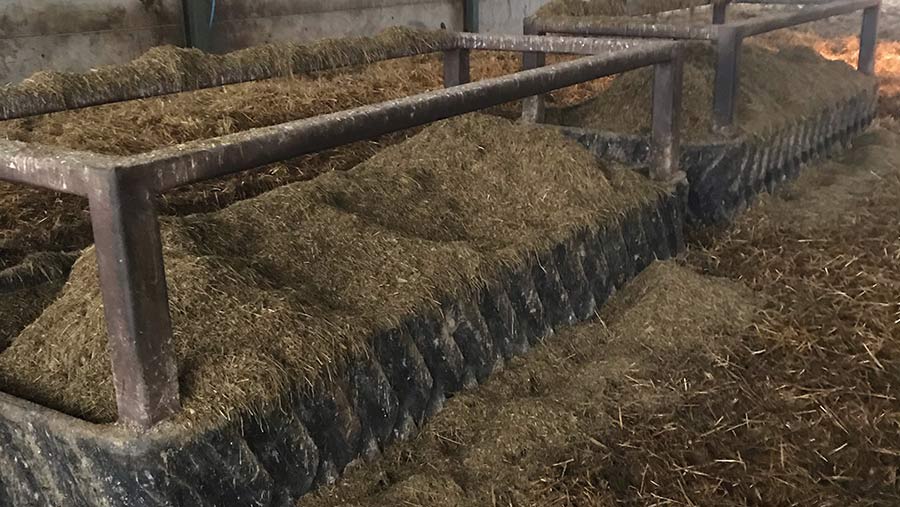 Having found himself short of feeding space after switching from a suckler herd to buying and finishing weaned dairy beef crosses, Melvin Heath, from Shipston-on-Stour, Warwickshire, put a set of worn-out crawler tracks to good use.

Welded to a steel frame, the tracks have been made into a bunker feeder for his 300-strong herd. 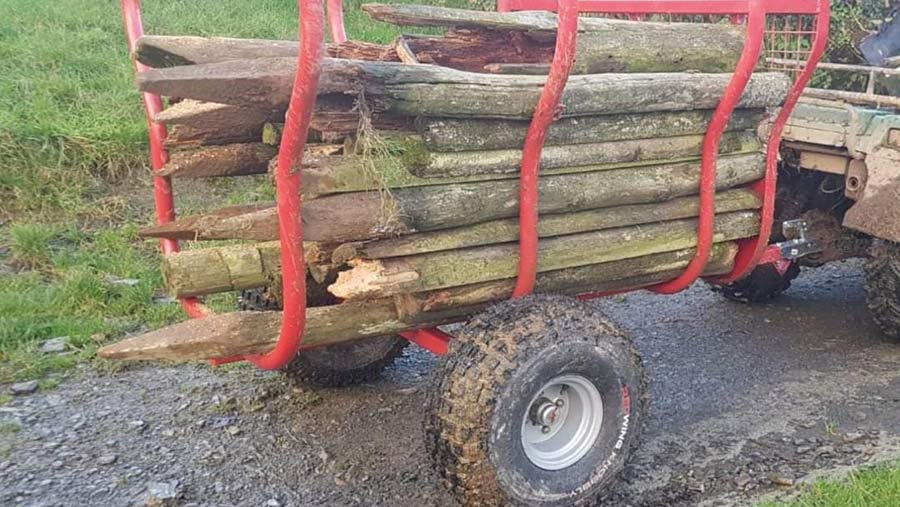 To aid with winter fencing in hard-to-reach places around the farm, Arwel Davies, from mid-Wales, made a quad bike trailer that allows him to carry fence posts to and from steep or damp parts of land.

The trailer is made from repurposed byre cubicles, and has a purpose-built fencing-repair compartment.

There are also storage sections for any tools needed for the job. 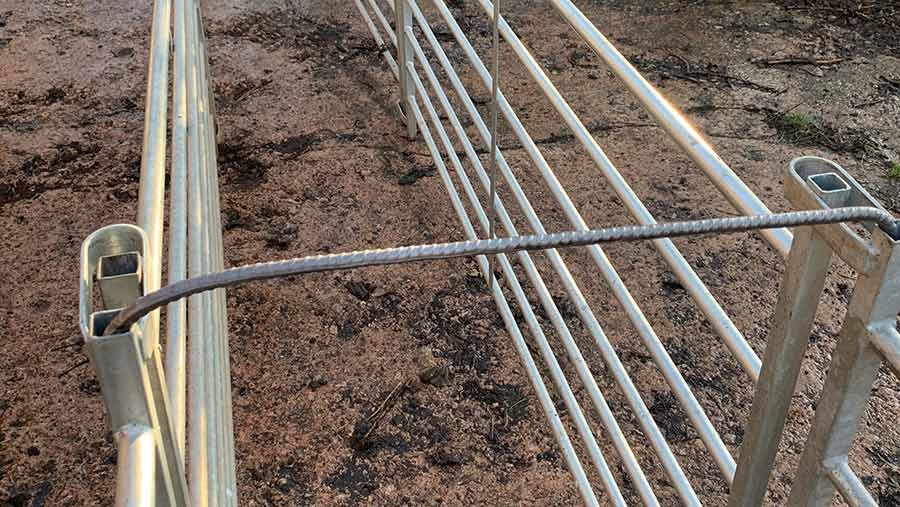 The clamps are made from a reinforced bar, which is measured and cut to about 0.5m in length, before being bent into a staple-like shape.

The clamps are simple to slot over hurdles and save time when setting up or taking apart a long race system. 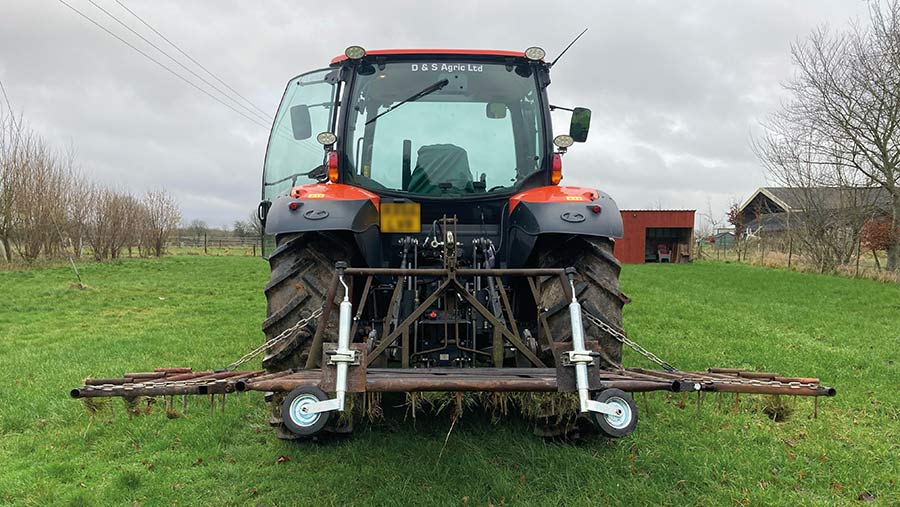 Having just splashed out on his first car, 17-year-old Archie Goddard from Abbotts Ann, Hampshire, didn’t have any spare cash for a new grass harrow.

So, using old gates, chain, and a broken buckrake, he made one.

The project took four days to complete and cost just £55, with the only purchases being a packet of welding rods and two trailer jockey wheels. 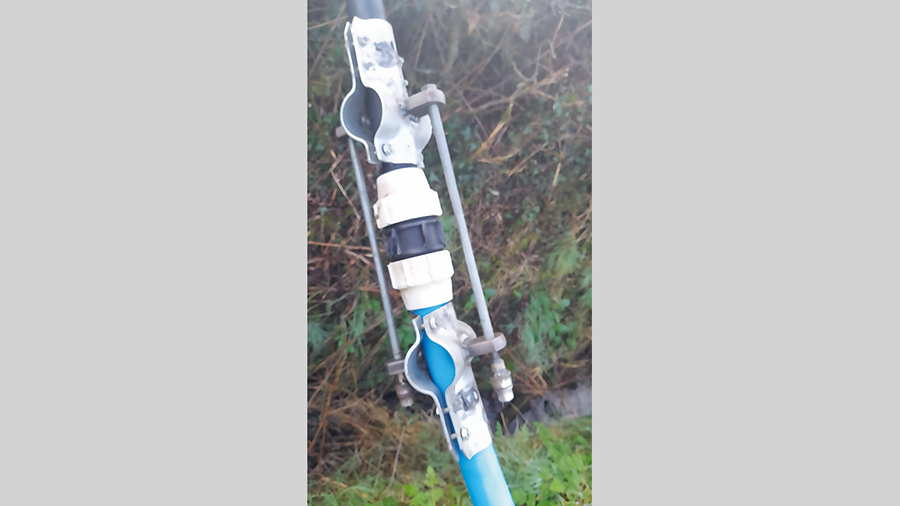 Tricky water-pipe connections are a problem of the past for Pete and Andrew Hockridge, after the pair created a nifty pipe-clamp contraption.

Made from some spare cubicle brackets, threaded bar and welded gate brackets, the clamps attach to both sides of the pipe.

A ratchet gun is then used to guide it into the connector.

Yeovil-based Colin Dening combined a roller and aerator to enable him to get two jobs done in one go.

He removed the water ballast from an old Watson roller, replacing it with concrete to make it heavier.

The additional weight meant that he needed to rebuild the original frame and replace the wooden Watson bearings with a tougher option. He then attached the aerator to the back of the new frame.

The project took about three years of intermittent work to complete, but the saved time and labour mean that the contraption has already paid for itself in just one year. 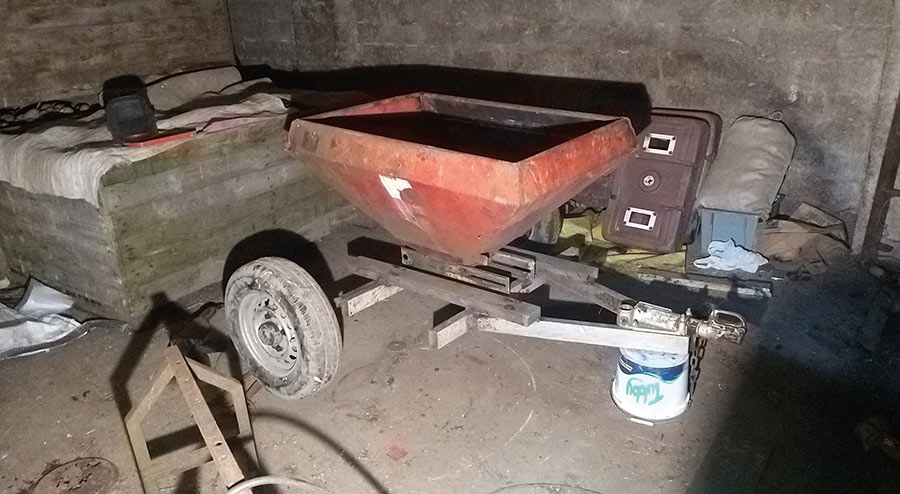 Aberdeenshire farmer Neil Forest built this simple trailed hopper to feed oats and soya to ewes without having to lug around heavy bags.

He tows it behind his tractor and, using a slide on the base, dishes the feed into upturned crash barriers.

These are cheaper than regular troughs and can be overlapped to give a continuous run. 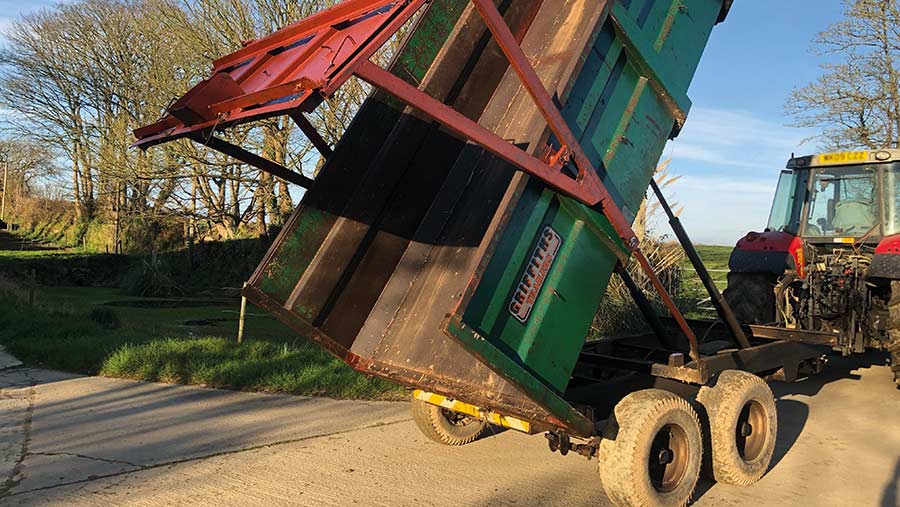 Fed up with manually latching the tailgate on his Griffiths trailer and removing it to carry muck, Cornish dairy and beef farmer Andrew Carbis decided to make it automatic.

The process involved building A-frames that attach to either side of the tailgate and hinge off pivots mounted on the trailer body. The ends of these A-frames are connected to bars running down to the chassis which push the tailgate open as the body lifts and pull it shut when lowering.

Some trial and error went into getting the geometry right, but it now lifts clear of the body during tipping, and seals tight when down.

All the metal came from the trailer’s old silage sides, and it took 10 hours of workshop time to complete. 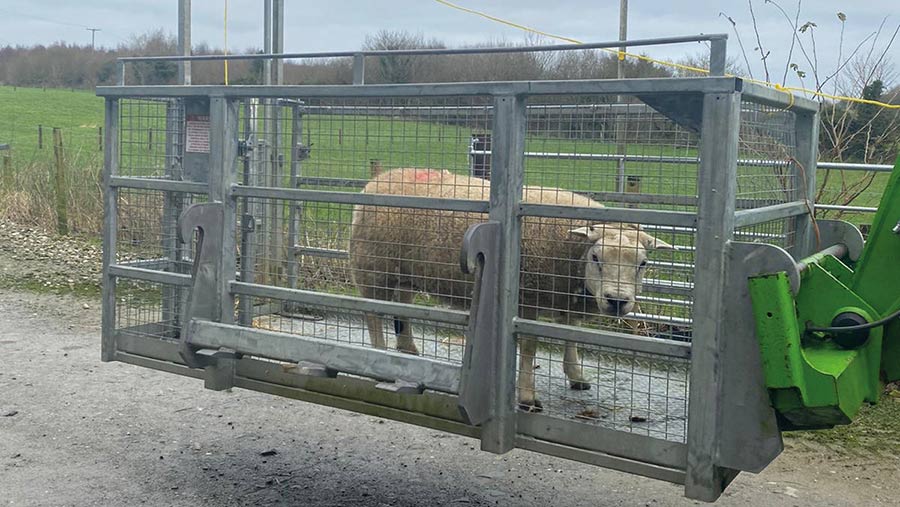 Jason Browne, based near Sion Mills in County Tyrone, adapted a lifting cage so that it could be used for transporting sheep to the fields.

The cage can be hoisted over gates and the automatic guillotine door means he can let them free without having to leave the cab.

The original door of the cage opened inwards and locked into position, allowing for the new gate to be slotted into the void.

Extending the boom of the telehandler triggers a pulley system, which lifts the gate open – so the sheep can, in theory, unload themselves.

The transporter took about two hours to assemble, and made use of an old handling race.

Business Clinic: What kit checks should we be carrying out?

Business Clinic: What kit checks should we be carrying out?