With a back catalogue containing thousands of ingenious ideas, there’s nowhere better to read about workshop builds that have saved time, hassle or cold, hard cash.

And if you have designed a machine, gadget or knick-knack of your own, it’s time to get involved.

The competition’s format means that you can still win one of the top prizes even if you have built something small and relatively uncomplicated.

The total pot for this year is £2,550, with the results decided by a panel of journalists and farmers.

See also: Read about all of last year’s entries

The entries are split into three categories: simple, intermediate and complex.

Who is eligible to enter?

Farmers, contractors, farm managers and workers can submit their inventions.

What if I’ve entered my design in other local inventions competitions in the past?

You are still welcome to enter.

What are the prizes?

Will you feature the winners?

All nine prize-winning inventions will be featured, along with the best of the rest, in Farmers Weekly magazine and online.

Many of the machines that you see on the stands at shows such as Lamma start life in the farm workshop, so it’s a great opportunity to get your ideas in the shop window.

How do I enter?

Just send some details about how the machine works and what you use it for to oliver.mark@markallengroup.com

You will also need to attach a couple of decent-quality pictures and a phone number so we can get in touch.

Prior to this he used a squeeze trailer – also built in the farm workshop – that allowed stacks of 14 bales to be picked up and moved in one.

This worked well, but increasing pressure to clear fields faster sent him in search of a speedier alternative.

His solution was to build his own chaser which, unlike conventional models that stack bales in the same orientation, alternated each row.

Much of his work is on sloping ground on the southern edge of Salisbury Plain, so he felt this was essential to give them enough stability.

It was no easy task, but he eventually devised an ingenious hydraulic arm and grab on the front that can pick up pairs of bales, load them straight or turn them 90deg, and then deposit them on the bed.

Each row of bales is shunted down the trailer by the arm and gripped tight by a pair of hydraulic gates at either side. Once full, the chaser heads to the stack and tips the load, just like a conventional model.

Air suspension helps give a smooth ride while bouncing over stubbles and allows the machine to self-level as the load changes.

The sheer number of moving parts called for an elaborate hydraulic system. This runs off the tractor’s load-sensing line and has sophisticated Canbus wiring to reduce the amount of cabling.

Opting for a setup such as this means all functions can be controlled via an electronic joystick mounted on the tractor’s armrest.

This was a complex job, so freelance control systems engineer Tom Bradbury was drafted in to help put it together.

Mr Williams says the rig can shift about 80 bales/hour and he reckons this could be increased to 120 if he enlarges some of the pipework to improve hydraulic cycle times.

The machine was built entirely from scratch, and he used CAD software purchased from PC World to help get the plan made.

He largely taught himself to use it, but did have some help from retired engineer Tim Stangle.

Putting the design together virtually allowed him to work out all the angles, ram lengths and geometry, and generate drawings so the metal could then be laser cut. 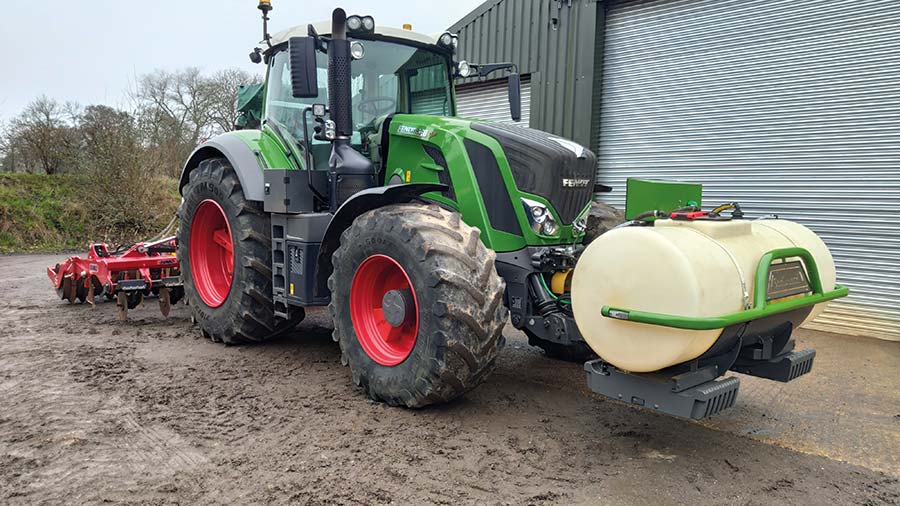 Derek Howard, known as DJ, of Alton-based contractor Scribeland, built a starter fertiliser applicator to spray liquid nitrogen and phosphorous in the bands of oilseed rape he drills with a 4m Sumo LDS.

His aim was to get more uniform establishment and vigorous early growth to see off the flea beetle threat and, at the same time, use the fertiliser more efficiently.

The starting point was an old 1,000-litre Knight front spray tank, which he stripped and resprayed to match the chassis of his Fendt 828.

He then sourced a set of Arag valves to control the filling and liquid transfer to the back of the tractor.

These were mounted behind the main tank frame alongside an old hydraulically powered centrifugal pump, which he rejuvenated with a new impeller.

This took a bit of setting up, as he only needed a modest flow at low pressure – not the high output that the pump was originally designed for.

Regulation of the application rate is managed by an off-the-shelf RDS Spraymaster 200.

This is wired to an in-cab plug that shares the tractor’s data, and can both alter the application rate according to forward speed and automatically start/stop when the linkage is lowered or lifted.

Half-inch pipe takes the fertiliser to the back of the tractor, where it enters a distribution manifold made from thick-walled water pipe.

Eight small-bore transparent pipes with push-fit joints then transfer the liquor to home-made toolbar brackets between the legs and roller of the LDS.

These have shields, made from halved steel tube, that protect the Teejet SJ3 fertiliser nozzles – selected to give precise coverage and minimal drift in a 165mm-wide band behind each leg.

The nozzles, too, have push-fit connections to their carriers, meaning they can be quickly whipped off in case of a blockage. 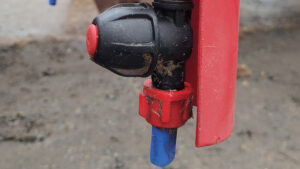 To finish, Mr Howard fitted some old Cat belly weights to the tank chassis to help keep the tractor’s front wheels on the ground. 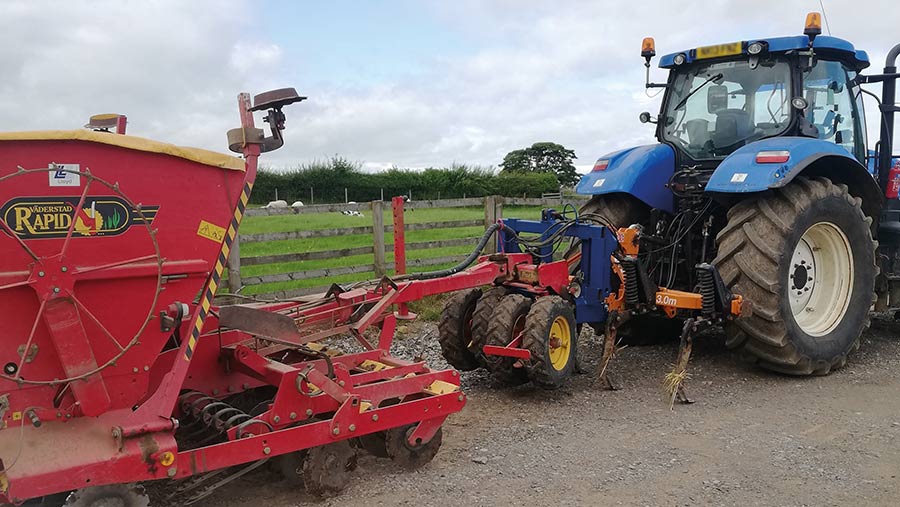 Andrew Watson won the simple category with a toolbar for his Vaderstad Rapid drill which allows it to establish oilseed rape crops in a single pass.

The toolbar is a standard Simba ST Bar, which is typically teamed with his X-press disc cultivator.

However, with the addition of an adaptor frame, he can run it between the tractor and drill to loosen the ground.

Originally, he built the frame for his Merlo telehandler for picking up three-point linkage-mounted implements – a job it can still do.

However, he enlisted the help of local engineer Keith Tallentire to add a lower linkage section so it would fit onto the ST bar and carry the drill at the correct height.

Some thought went into this to ensure the legs were working at sufficient depth when the drill was on the ground.

The additional length meant the drill’s hydraulic pipes had to be extended, but the control and lighting cables were already long enough.

He pulls the rig behind his 200hp New Holland and it established all his oilseed rape in its first season.

It performed well and he says he is pleased with the result, but he needed to set the system discs aggressively to level the furrows created by the ST legs.

Anyone building machinery in the farm workshop should ensure they comply with the relevant safety rules.

Experts create models to assess Listeria risks in some foods

Experts create models to assess Listeria risks in some foods

Letter From The Editor: New Products