The humble van has never really captured the imagination of UK farmers. But with its cavernous storage space, car-like driving comfort and the option of four-wheel drive, perhaps it’s been overlooked.

Many European countries have already cottoned on to the concept, treating buyers to an abundance of four-wheel drive options.

These range from compact car-based models, such as the VW Caddy, to full-size load luggers, many of which are available with a jacked-up ride height, off-road tyres and under-belly protection.

There are slimmer pickings in the UK, with no small four-wheel drive vans and just one mid-sized offering – the Volkswagen Transporter.

However, there’s more choice in the large van sector, where buyers get to choose between the full-size Ford Transit, Mercedes’ Sprinter, VW’s Crafter and MAN’s TGE (essentially a rebadged version of the VW).

The reason for this is purely demand. These larger four-wheel drive vans find their way into forestry work, quarries, and the construction industry, where the manufacturers shift enough units to warrant listing them in their brochures.

Even so, all bar the Mercedes come from the factory in a road-orientated spec with standard tyres and running height.

This is where Welsh firm Volkstrek comes in. It offers Seikel factory-approved lift kits and off-road equipment for VW and MAN vans, which can be fitted to new vehicles without affecting the warranty.

It’s also working with some specialists to develop systems to fit the current Ford Transit.

Buyers who want a Transporter or Crafter van adapted can order the vehicle from a VW dealer and specify the firm’s 4Motion four-wheel drive system.

They then take it to Volkstrek to have the conversion work carried out.

The MAN can be ordered, in adapted form, direct from the firm. Kits can also be fitted to used vans, providing buyers are able to find a decent example on the second-hand market.

To find out how these vehicles perform, we headed to Volkstrek’s headquarters in Aberystwyth and got behind the wheel of a 180hp MAN TGE 3.180.

This was kitted out with a full Seikel off-road package, which promises to transform its mud-plugging performance.

In its panel van guise, the TGE 4×4 comes with two wheelbases, three lengths between 6m and 7.4m, and three heights between 2.3m and 2.8m.

Two-wheel-drive models have a 3.5t towing limit but, because of the weight of the drivetrain, 4×4 models are capped at 3t.

In standard form, the TGE comes with a single row of three seats, but there is a Kombi option that adds a second row and a set of side windows so the occupants can see out.

Those who prefer a separate load area have the option of chassis-cab and crew-cab models, which have an open rear chassis, to which various bodies can be attached, such as tippers or chipper boxes.

All models come with a Volkswagen Group 2-litre, four-cylinder bi-turbo diesel – tuned to deliver either 140hp or 180hp – which is teamed with a six-speed manual or eight-speed automatic transmission.

The auto is available only in the higher power output.

As for  four-wheel drive, this is the same Haldex on-demand system used in VW and Audi cars with transverse engines.

This means the van is predominantly front-wheel drive, with the rears kicking in the instant the system detects the fronts are starting to slip – in 83 milliseconds, to be precise.

If a wheel does start to spin, the ABS-based traction control system also dabs the brake on that corner to redirect power to those wheels that do give grip.

For added assistance, there’s the option of adding a rear axle diff-lock, which Volkstrek recommends to all buyers interested in proper off-roading spec from the factory. It’s not an easy feature to retrofit.

The system on VW’s smaller Transporter is almost identical, so the same advice applies to anyone purchasing one of these.

Buyers of the MAN TGE have three spec levels to choose from, with Lion XS being the most basic, Lion XC adding extras such as a touchscreen and multi-function steering wheel, and the Lion XP getting the full pick of the options list. 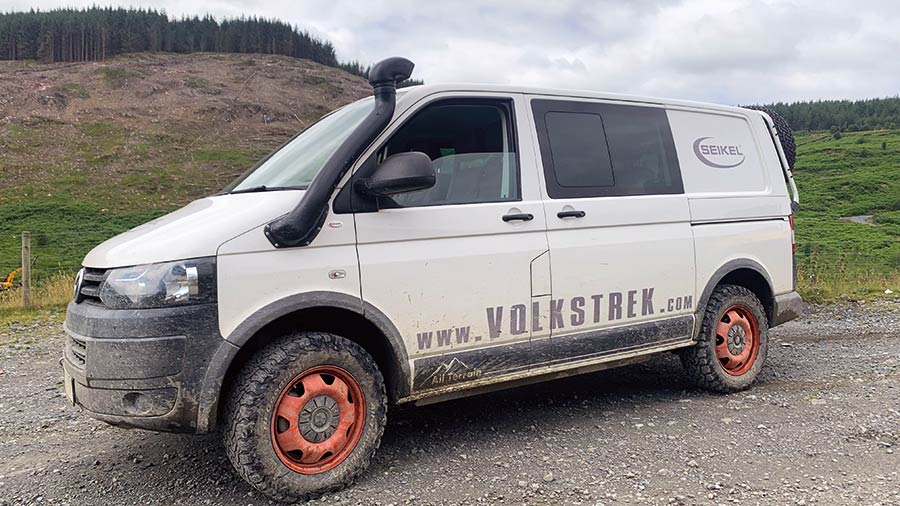 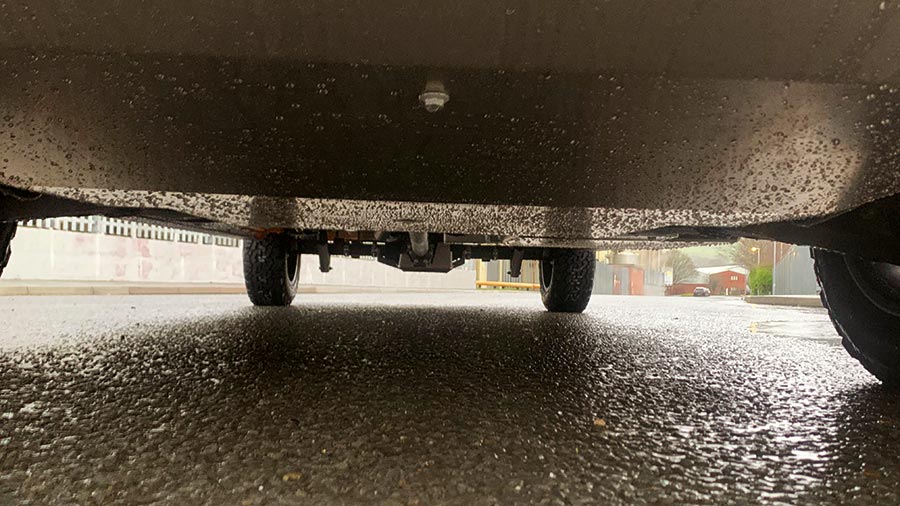 When a van arrives in Volkstrek’s workshop, all the original suspension components are removed and refitted with stronger shocks featuring a 30mm lift.

To make sure this doesn’t have any adverse effects on the running gear, they also change the top mounts, extend the bump stops, and add prop-shaft spacers.

This raising of the ride height gives room to fit a wide range of larger wheels and off-road tyres. 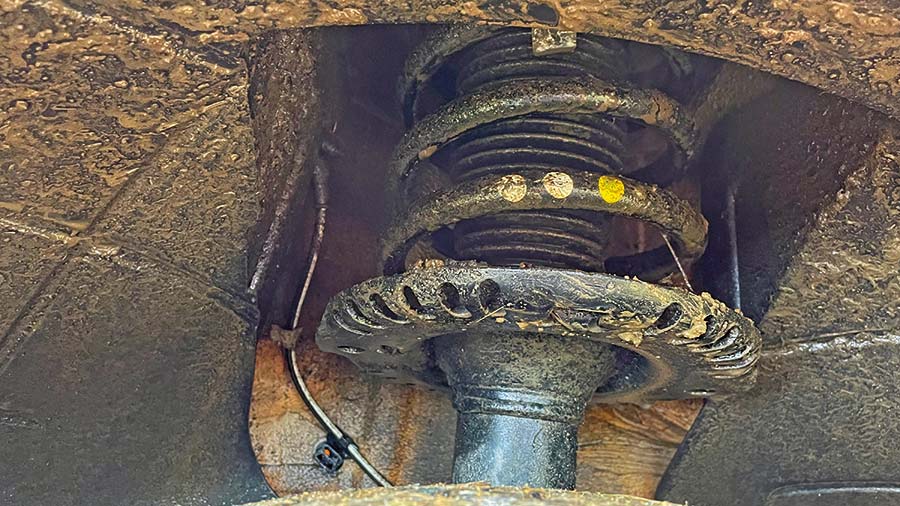 Most popular are 245/65 R17 BF Goodrich All Terrains, as these have the same roiling circumference as the originals and don’t mess with the gearing or require any adjustment of the speedometer.

There is room to go larger, and some customers do, but they need to sign a disclaimer to acknowledge that it’s not a standard setup.

Those who want to use their van to its full potential can also fit under belly protection, a snorkel and axle and transmission breathers.

As a guide, fitting a full off-road kit such as this costs about £5,000 for a VW Transporter and £6,000 for the larger Crafter and MAN vans. 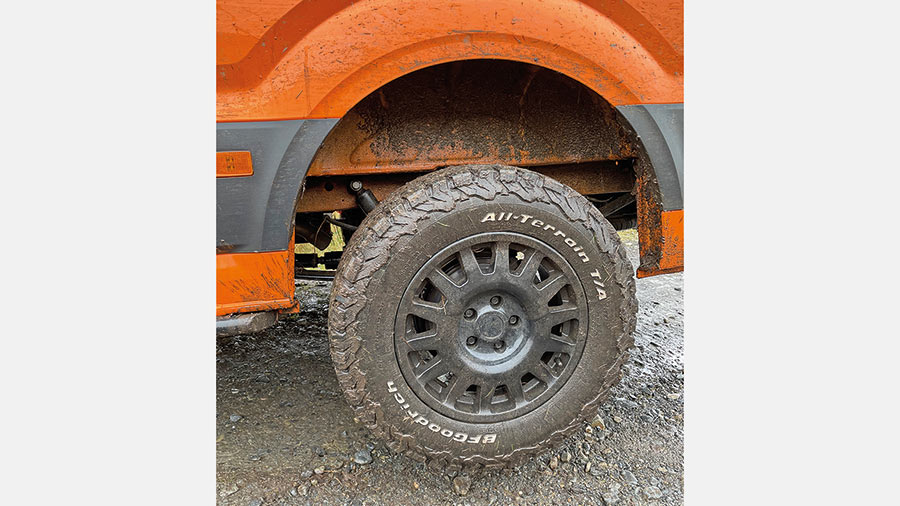 For a big van the TGE was surprisingly able on the rough off-road tracks we tackled.

The body lift meant we could traverse deep ruts without the risk of bottoming out and there was enough suspension travel to keep the wheels on the ground when going over lumps and bumps.

The addition of a snorkel and axle breathers also meant we could wade through some deep water-filled ruts without the risk of doing any damage.

The on-demand four-wheel drive system does an admirable job of finding the available grip, but the front-wheel drive bias is noticeable in some situations.

This is largely because the Haldex system only sends a maximum of 10% of the power to the rear wheels.

Interestingly, Volkstrek has been playing around with the system and has found a way to get the power split to 50:50. However, this isn’t available to buy just yet.

The lack of low range transmission does limit its off-road potential and might prove inconvenient when towing a heavy trailer off road.

For this reason, it could be worth considering the eight-speed automatic, as used in the Amarok pickup, which gives more gear ratios and removes the need to slip the clutch.

On the tarmac, we found the seating position comfortable and the ride perfectly acceptable. It also has enough power for effortless cruising. We didn’t get to try it fully laden with a trailer in tow, though. 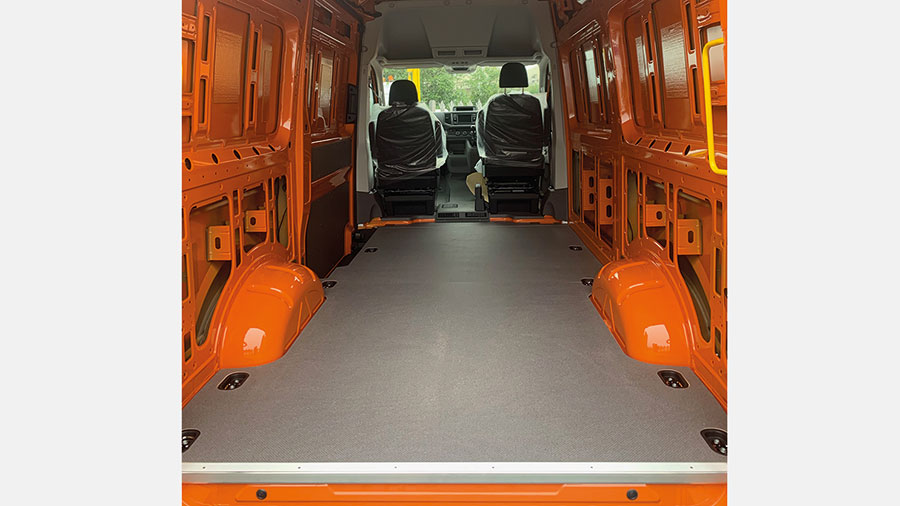 As a farm vehicle, it’s always going to be a niche player. But we can see a place for one on large arable operations or with contractors wanting to run a go-anywhere workshop/support vehicle.

For those who prefer a load-bed on the back, a Crafter chassis cab or double cab might be worth a punt.

These offer considerably more load space than a pickup and have multiple body options – a bit like a mini Unimog.

For those needing less storage space, a smaller VW Transporter could be a better bet. These are nimbler and are a bit cheaper to buy.

Farmers in Africa are leaders in the adoption of GMOs