by agrifood
in Machinery
Reading Time: 9 mins read
A A
0
Home Machinery
Share on FacebookShare on Twitter


A two-year reshuffle of Valtra’s entire tractor range, including a new G-series and updates to the As, Ns and Ts, culminated this summer with the launch of a quintet of Qs.

These slot into a 250-300hp opening, in which the Finns had been thin for many years, and the first models are expected to land on UK farms by the end of 2022.

The lowliest Q boosts to 250hp and the top dog – the Q305 – develops 305hp, so they will provide a natural step up from the popular T-series, which has hit a power and weight ceiling.

They can go no further than the 255hp (271hp boosted) T255, which is only available with the less popular Versu five-speed powershift gearbox.

Of more appeal is Valtra’s semi-hydrostatic T235 Direct, but that is restricted to a lesser 235hp (or 250hp with boost).

On the other side of the fence comes the six-model S-series, which does drift into sub-300hp territory but is too big and cumbersome to be a serious contender.

As such, Valtra only tends to sell the apex predator in that range – the 405hp S394.

The Q-series is built in Finland and runs a Finnish engine, but the tractors have more in common with their Agco stablemates than ever.

The powertrain and driveline are identical to the Massey Ferguson’s 8S range, with the pair’s parent company increasingly keen to pool research and development efforts to reduce costs.

This commonality has taken a long time to come to fruition, given Valtra joined the Agco family in 2004 – a decade after Massey Ferguson and just seven years after Fendt.

But it now operates in a similar fashion to the VW Group of Audi, Volkswagen, Skoda and Seat, and to the New Holland/Case IH relationship under the CNH banner.

As a result, Agco has rolled out a distribution policy that separates Massey Ferguson dealerships from the rest.

Valtra is considered a cheaper, but competitive, foil for Fendt (no surprise, given it’s now taking plenty of Fendt hand-me-downs), so the two are sold from the same premises.

Whether there will be a queue to bag a Q remains to be seen. Internal quarrelling over the choice of transmission delayed its arrival to the market, and that has given the competition a significant head start.

Currently, they’re all scrapping over UK sales in the 241-320hp sector (as defined by the Agricultural Engineers Association) that totalled 348 units through the first half of this year, which equated to just 5.4% of the total market – though it is the fastest-growing segment in Europe.

But the reward for nailing success in this power sector can be far reaching, with many farmers making fleet-buying decisions based on the performance of their flagship tractor, which could well be the Q-series or one of its rivals.

It’s not the first appearance of a Vario transmission in the Valtra parts book, with the S-series having run one since 2008.

But the decision to opt for an Agco CVT was the cause of development delays that led to an unusually long six-year gestation for the Q-series.

The original plan was to use the same powershift transmission as the Massey Ferguson 8S, which was launched without, and only recently gained, a Dyna-VT option – to much consternation from dealers and buyers alike.

It has two ranges – field and road – that both run from 0-54kph unbroken, or to a 25kph limit in Twintrac reverse-drive mode. It’s important for longevity and reliability that the right mode is selected for the job – as some owners have found to their cost.

The ML is much stronger than Valtra’s small and compact Direct gearbox on the T-series, so is comfortably able to handle the 1,200Nm of torque pumped through it. And it also works differently; while the Direct has four manual range changes, the Agco CVT offers butter-smooth drive up to 50kph, making it better suited to road work.

Control-wise it’s identical to the Ts, except there are only two ranges to switch between.

Fendt’s recently unveiled 700-series has been given a brand-new 7.5-litre Agco Power engine, but Valtra has stuck with the old 7.4-litre oil-burner.

It has been a reliable servant, having remained largely unchanged for well over a decade and still in use on all the Ts and Qs from the T175 upwards, plus a ruck of Massey Ferguson tractors and combines.

It offers plenty of displacement and a long piston stroke to serve up more torque at lower engine revs; max power comes at 1,850rpm and the top road speed is available at 1,500rpm.

The firm’s 6.6- and 4.4-litre engines are basically the same too – albeit with smaller blocks and shorter con-rods.

One minor difference on the Qs is that the “Eco Power” function is now automated, rather than being manually engaged.

As a result, the tractor’s ECU automatically switches to a second engine map when it detects an opportunity to reduce revs – and thus fuel consumption.

Emissions control is a carbon copy of the Ts, which means it uses AdBlue to get rid of nitrous oxide, but has no exhaust gas recirculation system.

That differs from the S-series, where 10% of the combusted air is sent back to the intake manifold.

Valtra’s current cab was first launched on the N-series in 2014, but received an interior revamp for fifth-generation models – including a new A-pillar display.

It is now available with the firm’s “premium” finish: dark plastic, chrome details, a leather steering wheel and rubber mats in the storage compartments.

These packages, which mainly involve colours, cab details and lights, should make it easier to spec a smart-looking tractor without being bamboozled by all the options.

A roof window is standard, as are new high-level indicators at the back that won’t be obscured by a cultivator or plough.

From the seat, the Q305 doesn’t feel as big as it looks. That’s partly the result of its steep, sloping and slim bonnet that makes it possible to see the front linkage.

It’s also easily accessible, with the cab narrower at the front of the tractor to allow for a shallower pitch on the steps than most of the competition. And the steps are now aluminium, so shouldn’t be the first thing to rust. 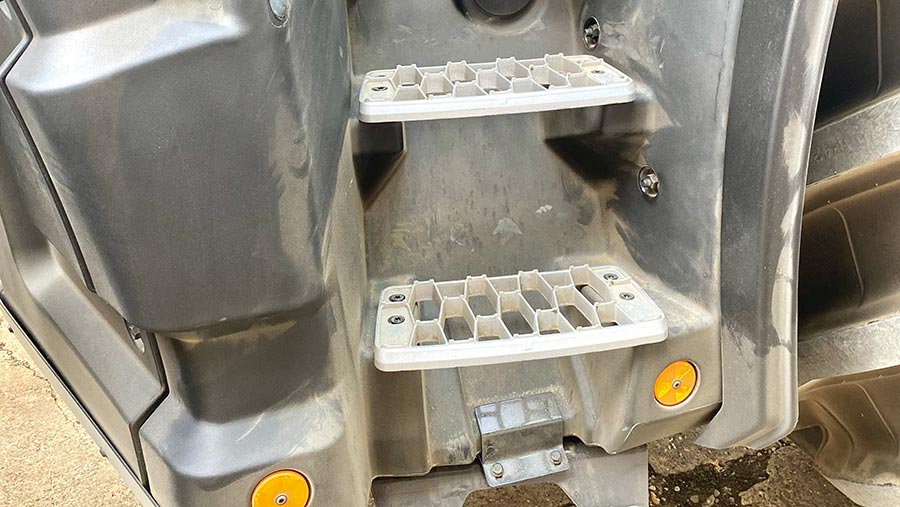 What are the options?

One-quarter of all the tractors leaving Valtra’s Soulahti plant are funnelled through the Unlimited studio, such has been the success of its unique customisation offering.

For most, it’s an exterior colour wrap, wheel spray or a fancier leather seat, but the options are endless – depending on who is signing the cheque.

Run-of-the-mill extras include a cooled Evo seat, in-cab fridge, or an extra SmartTouch terminal that can be used to run an Isobus-compatible implement, guidance or external cameras.

But beyond the boring stuff there is a whole world of options from the practical to the peculiar, including a PTG-sourced central tyre inflation system and an ear-splitting 600W subwoofer that sits at the base of the A-pillar.

A central greasing system is available too – primarily for council and airport buyers that have a workforce less au fait with tractor maintenance – as are beacons that automatically engage above 25kph and follow-me-home lights.

Plus, there’s the option of a Canbus-controlled radio that allows audio and phone to be controlled through the SmartTouch screen and Twintrac reverse drive is available for running a chipper or set of triple mowers.

The addition of technology is particularly important in this power sector, and manufacturers are making a big deal out of what they can offer.

As far as the Q is concerned, there’s Auto U-Pilot, which creates a virtual headland boundary – past which the headland management system automatically engages.

However, it still requires the operator to turn the wheel – unless they’ve specced SmartTurn.

Just launched and not yet fitted to any UK tractors, it automatically turns the wheels to swoop around and start the next bout without any driver input.

Wayline Assistant is available too, automatically forming A/B lines around the headland once the field boundary has been recorded to speed up the process of finishing the field without overlaps.

And application accuracy can be improved with up to 96 section control. This has been designed primarily for drills, where several products might be applied separately across more than one row.

As for guidance, Qs come with the option of a Trimble or slightly cheaper Novatel receiver. In most cases, they’ll be running on mobile RTK with a roaming sim.

How heavy and what can it lift?

Though Valtra considers the Q a bit of an all-rounder, it’s likely to spend a good chunk of its hours toiling with a cultivator or drill in tow.

With that in mind, linkage lift and payload capacities are respectable, if not quite a match for New Holland’s T7 HD or the equivalent Case IH Optum.

The rear linkage is rated to 10t and the front 4.8t, compared with 9t and 5.5t on the T series (which benefits from shorter front link arms).

Bare weight is 9.2t – though nearer 10t when dressed for fieldwork – and max gross weight is 16t. Where traction is challenging, there is the option of 250kg or 500kg wheel weights that can be paired with a substantial front box.

Buyers can pick between a flanged or bar rear axle, with the latter offering more tyre size options.

And, where central tyre inflation is specced (£6,500), the pipework can be routed through the inside of the wheel, rather than precariously down the outside.

Most will run on VF tyres – either Michelin AxioBibs or Trelleborg TM1000s – with 710/70 R42s the biggest available.

However, 650/85 R38s will also be popular given they are cheaper, keep the tractor narrower and, with a CTF system fitted, can still be let right down in the field and pumped up to protect the carcass on the road.

While most T-series models leave the factory with a 160 litre/min pump, Qs come as standard with a bigger 200-litre/min output and four spools.

Opting for the premium pack ups that to five – plus one permanently committed to the pick-up – and also includes decompression tabs to ease their release.

A hydraulic link is officially optional, though all but standard on tractors of this power, and they can also be paired with Alo’s biggest front loaders where farmers or forestry firms want more flexibility to eliminate the cost of running a separate telehandler. 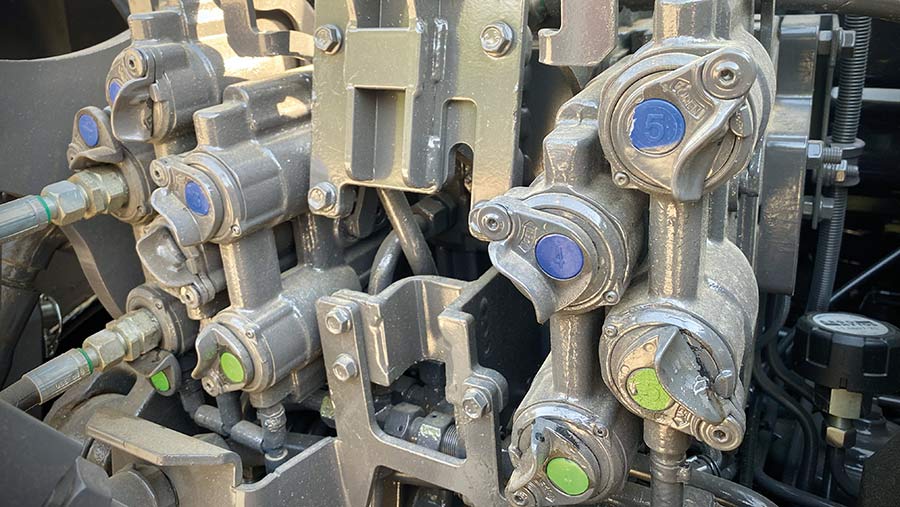 The Qs are built on established hardware – Agco’s 7.4-litre engine is time proven, and buyers know exactly what they’re getting with the Vario transmission.

So, it’ll come down to dealers’ abilities to oust established models, which is muddied by the fact that they will be selling both the Qs and the sector’s market leader – the Fendt 800-series and new 700s.

Aggressive pricing might help it steal a march on its stablemate, with the added attraction of an inexhaustible list of options in its unique Unlimited studio that means drivers can have a bigger say on the finished product.

Five-year HLS extensions to be offered in 2023