Field of Dreams: Finding Love on Farmers Only

by agrifood
in Lifestyle
Reading Time: 4 mins read
A A
0
Home Lifestyle
Share on FacebookShare on Twitter


There’s a waterfall in Decorah, Iowa that Katie Vaske just loves. She’s always felt at ease near water, and she takes any opportunity to spend time on the shore, basking in the waves. But waterfalls hold a special place in Katie’s heart; there’s magic there.

After dating her boyfriend Doug for about a year, she decided to show him her favorite waterfall. They drove the 90 minutes from Manchester, Iowa and took the short hike to the top of the falls. Looking out at the water, with Doug beside her, Katie smiled. She turned to Doug, and jokingly said, “You know, you could ask me to marry you up here.”

A year earlier, Katie didn’t think marriage was in the cards for her, or at least not for a while. She was only in her mid-20s, but she’d already gone to college for veterinary assisting and was working full-time. She didn’t really have time to date, she says, and she especially didn’t want to wade through the overwhelming prospect of online dating. “I talked to my friend and told her I was never going to sign up for a dating site,” Katie recalls. But, after some more thought, Katie relented. “I signed up for that one thinking, ‘oh, I ain’t gonna find anybody. And then look what happened.’”

Katie wasn’t interested in dating sites such as OkCupid and eHarmony, where there were thousands of questions and too many decisions to make. Instead, she thought about the kind of man she was hoping to meet: someone smart, adventurous and not afraid of hard work. So she turned to Farmers Only, a dating site for, well, farmers only.

Pretty soon, Katie received a message from Doug, who grew up and still worked on his family farm. For the first few exchanges, the site lets users send pre-fab stickers or emojis, and then you can decide if you want to talk more. Doug’s first note to her? ‘I’ll send you a dozen roses.’ Katie responded with a winky ‘you’re cute.’ (Somehow, she swears they started off as friends and built a relationship from there.) But, within a few days, they were messaging regularly and ready to meet in person.

Incredibly, neither of them had to go far.

Although the two had never met before, they lived only five miles apart, straddling the border of Manchester. In all that time, their paths had never crossed. Now that they finally had, the two started seeing each other regularly. 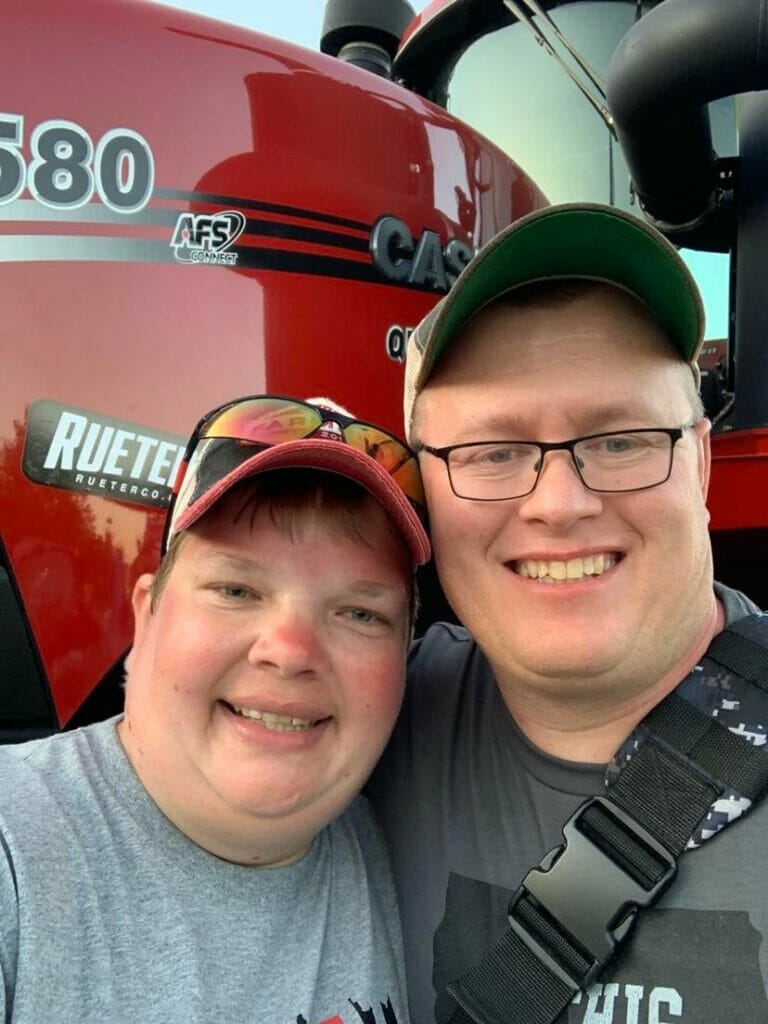 At first, talkative Katie had to coax shy Doug out of his shell. She remembers their first date conversation revolved around tractors. “It was a lot of farm talk,” Katie says with a laugh. But, eventually, Doug opened up and, as they got to know each other, proved to be just as romantic as his first note about the dozen roses suggested.

A few years into the relationship, Doug and Katie were looking for something to do on a rare shared day off. The two love taking impromptu road trips and going on mini adventures. Katie began listing a few places they could visit. When Doug suggested the waterfall in Decorah, off they went. “There’s a lot of people there, so I’m like ‘OK, we can stay down here.’ And he’s like, ‘No, let’s go to the top,’” Katie says. She was a little confused, wondering why they had to hike to the top of this waterfall when there are all these people around? But Doug seemed excited, so they started climbing.

“I’m going forward to the deck, and he’s standing behind me. And I say, ‘What are you standing behind me for, get up here!’ Well, I turned around, and he was on one knee.” Katie’s joke from years earlier had come true. Doug proposed on top of that waterfall, and she said yes.

While Katie couldn’t see herself getting married, her family could. The first time she brought Doug home to meet her parents, she says, “My dad pulled me to the side and he said ‘you’re going to marry that man.’” The pair got married in October 2018, and since then, have settled down on their own farm, just down the road from the Vaske family farm. They grow 25 acres of corn and beans, and they also help out on Doug’s family farm, which covers 300 acres. They dream of expanding one day: They’d like to get more land and maybe some animals, a few calves to raise.

In the meantime, Katie and Doug are still adventuring and roadtripping whenever they can. They’ve now visited every waterfall in Iowa. All because Katie took a chance and clicked.

The connection much of the public has to farmers markets is, in many instances, the only direct connection they have to farmers and ranchers themselves. So it’s exciting...

Terry Bradshaw’s Oklahoma ranch back on the market

Back in 2019, there was lots of buzz about the Oklahoma ranch of iconic Pittsburg Steeler player and broadcaster Terry Bradshaw going up for sale. However, the prospective...

Verde Resources To Kickstart Carbon Farming With Biochar In Missouri