Farmers pay final respects as the Queen is laid to rest

by agrifood
in Farming
Reading Time: 3 mins read
A A
0
Home Farming
Share on FacebookShare on Twitter


Farmers have paid their final respects to Queen Elizabeth II, who was laid to rest at St George’s Chapel in Windsor Castle on Monday 19 September.

The historic day began with a state funeral at Westminster Abbey and ended with a private family service, where Britain’s longest-reigning monarch was buried alongside her husband, the Duke of Edinburgh, in the royal vault.

More than 2,000 mourners attended the state funeral service, including Northumberland arable farmer Ed Dungait, who represented the National Federation of Young Farmers’ Clubs (NFYFC) in his role as its chairman.

“It was a real privilege to be invited, and to represent YFC members for one of the biggest days in history was quite special,” Mr Dungait told Farmers Weekly.

“As the coffin was about to enter, the atmosphere was quite surreal. I got goosebumps and started shivering. With the pipes playing outside, I have never felt anything quite like it.

“The enormity of the occasion really sunk in.”

Mr Dungait said the Queen loved the countryside and was a big supporter of NFYFC, an organisation she became patron of in 1957.

“In years gone by she attended the Royal Show a lot, as well as other events. I’ve had dozens of messages from YFC members from across the country, thanking me for going on their behalf. That warmed the heart and that is why I felt quite proud to have gone, because it meant something to members.”

Meanwhile, farmers in Berkshire paid their respects to the Queen by lining up tractors in Runnymede, along the route the funeral procession took to Windsor Castle.

A total of 26 tractors lined up for the guard of honour in a National Trust field farmed by tenant farmer David Sheldrake, after security clearance was granted by the police.

This involved the tractor drivers giving officers a password in order to access roads that had been closed due to the funeral procession.

Farmer Izzy Rayner was inspired to organise the tractor tribute after seeing farmers in Scotland do something similar.

Ms Rayner was helped by her father, Colin Rayner, a farmer and landowner in Windsor and Maidenhead.

Farming representatives from the area included students from Berkshire College of Agriculture, farmers William Emmett and Steve Whitby, and other farmers and contractors who have supplied the Royal Farm Shop at Windsor.

Mr Rayner told Farmers Weekly: “It is local tradition that when a well-respected and good neighbour passes away we normally follow the coffin or line the route with tractors.

“Our good local farmer and neighbour just so happens to be Her Majesty the Queen.

“It was very sombre, but it was worth every second and we were very lucky that we saw the hearse and we could bow our heads.”

Mr Rayner said it was an emotional moment, having known the Queen for more than 40 years. 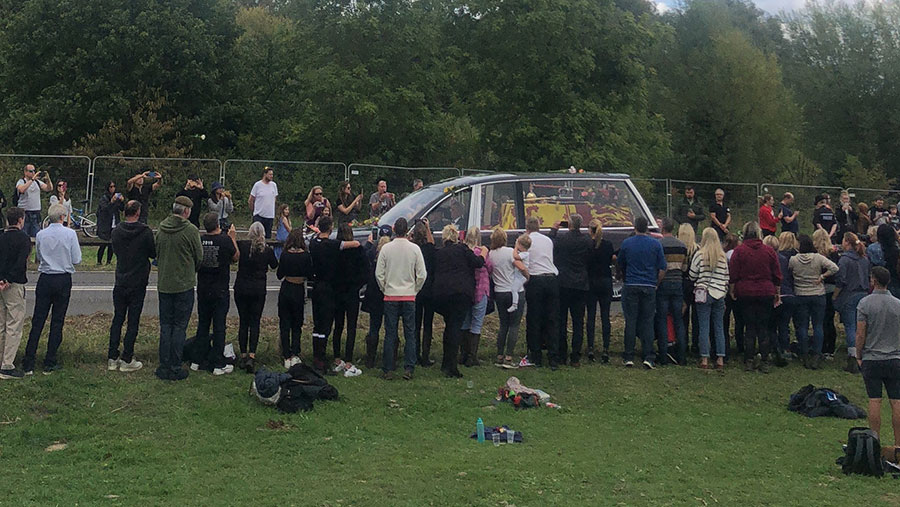 Elsewhere, Will Jones, who works for JSR Farms in East Yorkshire, created this stunning field tribute to the late Queen.

The farmer was busy drilling on Monday, but stopped to pay his respects by observing the national two-minute silence at the end of the funeral, as well as mark the emblem of Queen Elizabeth II in a field of stubble. 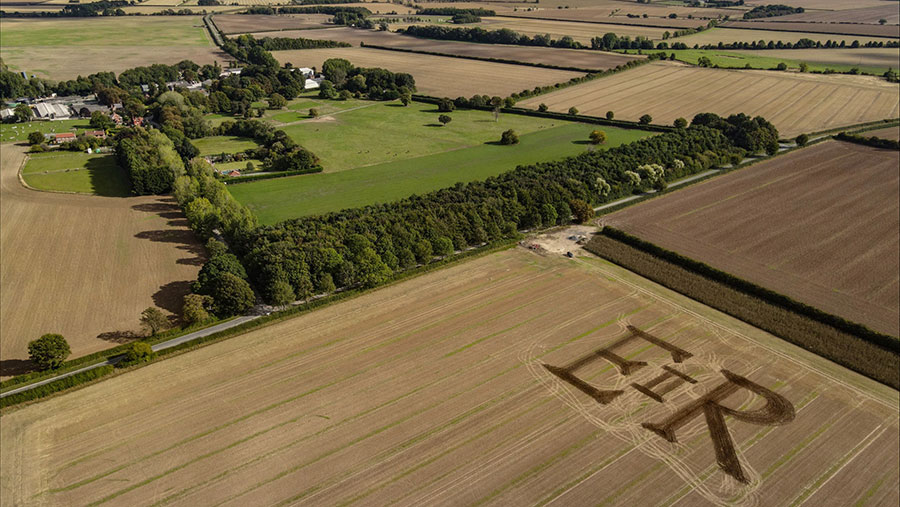 Watcher! The 2020s are quickly turning into a carbon copy of the 1970s, and farming friends have commented that I seem sharper mentally, stand a little taller and...

Organic farming experts are being sought by Defra to advise the four UK governments on future policy in this sector. The Expert Group on Organic Production (EGOP) will...

Industry leaders have given a mixed reaction to unconfirmed reports that Defra is considering the launch of an area payments scheme that would pay all landowners in England...

Pig producers in England and Wales have endured seven successive quarters of negative margins, and cumulative losses are estimated at £600m since autumn 2020, AHDB figures show. The...