We find out how Krone’s EasyCut B870 CV butterflies and F320 front mo-cos have performed for Ross-shire contractor Stuart Wilson.

What made you choose Krone mowers?

We’ve been through John Deere, Kverneland and Kuhn mowers in the past, all of which were front and trailed rear combinations.

There was nothing wrong with our previous Kuhns, but we wanted to increase output to cut down the overtime we were clocking up during the silage season.

Krone ended up being marginally dearer than the two others we priced – Kuhn and Claas – but we liked what they had to offer and we get on well with the dealer, Alistair Young Engineering at Forres.

It’s ended up being a good call, as Krone UK’s backup is the best we’ve experienced from a machinery company.

They’ll always answer the phone and will get parts here overnight, which is why we now also have one of their big square balers, a twin-rotor rake and a tedder.

Our rear butterflies are rigid B870 CVs (two 2.8m beds) with steel tine conditioners, which give an 8.7m cut.

The 3.2m pull-type front mower was slightly more money than the “push” version, but it follows the ground better and we like the fact that it hooks straight onto the tractor’s front linkage, rather than coupling via an A-frame.

What tractor do you run them on?

They were on a John Deere 6215R for the first year, but I often had it on its knees and couldn’t hit the big acres that I’d wanted to.

After that, I switched to a 6250R Autopowr, which boosts to 300hp and has plenty of power for the job. Last year I knocked down 90ha in a single day.

I run on RTK guidance, which means I can cut every other bout to speed up the headland turns.

The overlap between front and rear is just under half a disc, and that comes in handy on the banks when the tractor tends to crab a bit.

How has it performed?

I’ve not yet gone into a crop of grass or wholecrop that I can’t cut. I found that rank, heavy grass tended to wrap around the conditioners of our old Kuhn combination, but that never happens with the Krones.

In fact, I’ve had no downtime at all, and running costs are tiny.

We’ve spent just over £3,000 in three seasons, and that covers everything from a new light lens, to roll pins, blades, skids and discs, though this doesn’t include their upcoming winter service.

Last year was the first time I had to change any of the skids, so the originals were good for almost 2,000ha.

I’ll gradually swap them as they wear – it’s usually the outside ones that go first on the front mower and inside ones on the rears. They’re bolted to the cutterbar, so are pretty easy to replace.

Our only real hassle is with stone damage. Krone’s SafeCut system is good though – it takes me 20 minutes to change the roll pin that shears in the sprocket driveshaft.

This allows the disc to screw up the shaft by 15mm to avoid any damage to the driveline or neighbouring discs.

I also change the blade fixing bolts relatively often. The blades themselves rarely wear out as they usually get lost to stone damage before they reach that point. 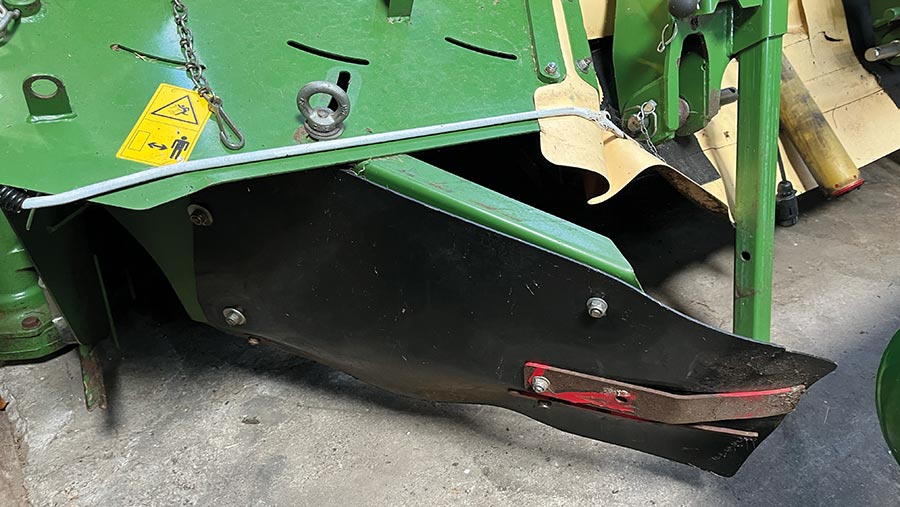 Not a lot – everything is operator friendly and easy to adjust.

However, we did fit extensions to the swath boards on all three mowers.

The original setup was fine in a tall, standing crop, but the boards were too short to form a tidy swath from messy, tangled grass being flung out of the conditioner – particularly for the 20% of our customers that bale their own grass, often with a fairly narrow pick-up.

Krone’s plastic extensions add about 300mm to each board, though I had to beef them up with metal braces as the force of the grass coming out of the conditioner was too much for them.

My only other complaint is that the blade toolbox on the front mower is a bit on the small side.

Definitely – they’ve been the most reliable thing we’ve had since the John Deere 1365 mower we ran for 12 years. Plus, they’ve probably only depreciated by about £11,000 in the time we’ve owned them.

I thought about replacing them this year as we like to keep the frontline grass kit fresh, but the numbers didn’t really stack up, particularly given the uncertainty in the market.

I’d go for the B1000s with telescopic arms next time, which will give me the flexibility to push them out for a 10m cut on flat, straight runs, or pull them in for a bit more tolerance on banks.

They’re also Isobus ready, so I’ll be able to work them on the tractor joystick.