Lincolnshire farmer Mark Bates tells us about his Fendt triple mo-cos. Find out how the mower performs and how he rates it.

What made you choose Fendt mowers?

The anaerobic digestion plant was built six years ago and we wanted to produce most of the feedstock in-house. Grass leys currently account for about 8% of that.

When we started out, we had the first full-production Fendt Katana 85 forager in the country, then did a deal for an 828 tractor and a set of triple mowers.

I liked the idea of having our own mowers, as it means we can cut when we want – usually in the afternoon when the sugars are high.

I have friends that get on well with the Krones, but they were a bit dearer and I wasn’t entirely convinced by the mower bed.

Plus, we’d done a lot of business with Chandlers, our local Fendt dealer.

We have a 3m pull-type front and the rigid-frame 9314 butterflies that include hydraulically driven rear groupers.

They added roughly £16,000 to the list price, but it saves the hassle of employing a contractor with a rake for the lighter second, third and sometimes fourth cut of the year, as we don’t have our own.

We leave the conveyors on all year, though we swing them up and out of the way for first-cut as it’s too wet and heavy to chop straight behind the mower.

They add about 600kg to the total weight of the rear unit, which isn’t too much of a problem, and it gives us the option of adjusting the swath width from the cab to suit the crop.

They’ve been trouble-free, too – aside from losing the odd cleat off the belts.

What tractor are they run on?

The Fendt 828 – it’s the perfect tractor for the job, is really well balanced on the road and is also big enough to do all of our drilling.

I liked the idea of the 724 for pure versatility, but it would have to be worked hard to get near the same output.

The mowers run through Isobus with section control, so when it’s all set up correctly, it needs just one button press at the end to complete the turn.

Plus, we’ve got all the tractor settings saved, so can immediately load the pre-set controls and cruise speeds as soon as the mowers are hooked up.

We run it on an RTK correction signal, which means there is no risk of any misses.

How has it performed?

We’ve had a few minor breakdowns, but nothing that has really stopped us in our tracks.

The most recent was the slip clutch on the front mower drive. It had been on its way out for a while, but we’d been soldiering on, going slower and slower, to get the job done.

It failed in the end, but only took an hour to fix.

We also had an oil flow problem that caused the ram on one side of the front mower to lift quicker than the other, but Chandlers sorted that for us.

And the threaded bar that holds the double spring brackets in place snapped, which was another relatively easy fix.

We don’t tend to sharpen the quick-change blades, as they usually break before they reach that point.

Bigger stones sometimes snap the six tabs on the Driveguard shearplate, which are easy enough to swap out by removing a few bolts that hold the assembly together.

The outer ones are a bit more of a faff, as the top hats prevent you from physically seeing what you’re doing. 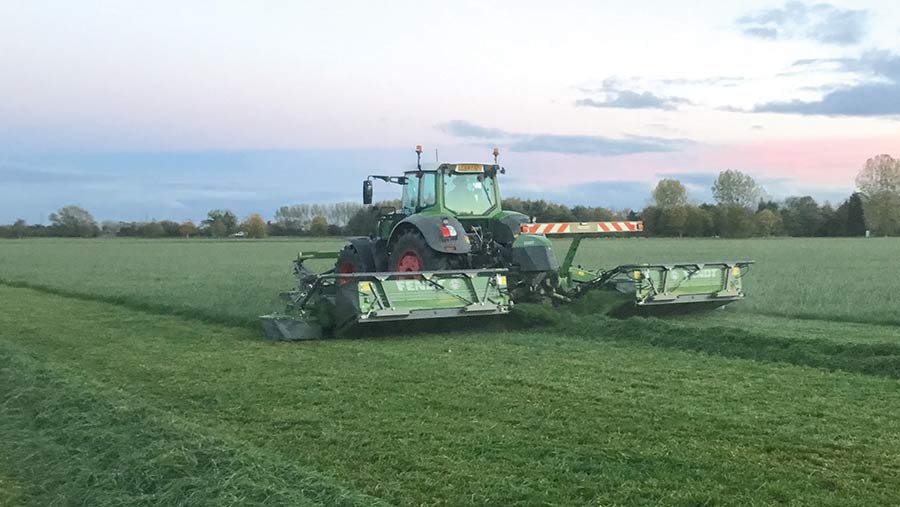 One thing we quickly learned to do is follow the correct procedure for taking the mowers off.

The hydraulic pressure needs dumping and the valves locking, otherwise they’re a right pain to get back on again.

I’ve also found they leave a slightly scraggly stubble behind tangled first-cut crops, but I’m not sure any other mower would fare better.

Other than that, there is little to complain about – except for some awkward grease nipples.

However, they need a good driver to get the most out of them, and you certainly can’t just chuck a steering wheel attendant on the seat and expect to get a good result.

Yes, but at the moment our focus is on increasing the grass acreage, primarily to give us somewhere to spread digestate coming out of the plant.

That should give the current mowers a bit more work to do over the next couple of years.

The Tillage-Live event returned to its triennial haunt of Dunbar, East Lothian, last month, giving farmers in the area the chance to see the latest drills and cultivators...

6 Simple Tips for a Safe Harvest This Fall

By Ben CovingtonSafety should be a major concern for all farmers during harvest, but as the season goes on, it can be easy to miss details or neglect...

They were once the preserve of big, open grain fields in Australia, Canada, and the United States, but ultra-wide headers have become the new must-have on latest high-output...

In April 2021, then-president Gotabaya Rajapaksa abruptly banned imports of chemical fertilizers, pesticides and herbicides, in an attempt to preserve...