Devon dairy and beef farmers Robert, Thomas and Nick Reed give us their review of the Kuhn triple mo-cos.

See also: How to build your own tractor autosteer system for £700

What made you choose Kuhn mowers?

They came in at about £44,000 and were a like-for-like replacement for our previous set, which we bought in 2014 to increase output over a John Deere front-and-rear combination.

We couldn’t fault the performance of the old ones, so we didn’t really shop about.

Plus, most of the other implements on the farm come from Kuhn and we get on well with Simon Roberts at Beares, who also sells us the JCBs.

We have Kuhn dealers everywhere around here, but Simon looks after us and dealer backup is very important to us.

Though we could probably get by with something smaller, we’re on a multicut system that relies on producing good-quality silage, and that means knocking down a lot of acres when the time is right.

We tend to cut our 80ha of grass leys five times a year so, from May onwards, they’re going back to the same fields every 28 days.

Once cut, everything is flicked out with the tedder and, for the past three years, it has been rowed up with a Merge Maxx 950.

This has revolutionised the job for us, mainly because we’re on brutally flinty ground and the merger lifts the grass more delicately than a rake, so feed contamination is less of a problem.

In lighter crops, it also means we can make three passes with the merger to shift 23m of grass into one good-sized swath that is picked up by a Pottinger Jumbo 7220 forage wagon.

The aim is to have the silage in the pit within 24 hours of cutting.

What tractor are they run on?

We ran the old ones on a Fastrac 4220, which was fine, but for the past two years we’ve had them on a Fendt 828, and it’s a completely different beast.

It’s far easier to operate and is the only tractor without a reversing fan that we’ve found capable of keeping itself cool in hot, dusty conditions.

From our experience, John Deeres tend to struggle with overheating – for a while we ran a 7530 – and the Fastrac used to get hot, too.

Our multicut system means we’re not putting huge volumes through the mowers on each pass, so we tend to drive as fast as the autosteer will allow, which is about 20kph. 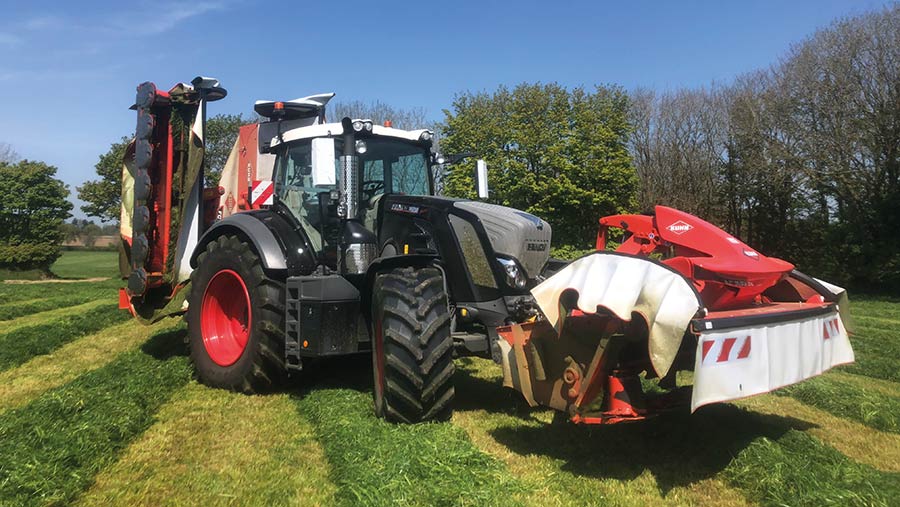 We’re only on the basic Egnos signal, which occasionally gets lost but is good enough, particularly as there is a 30-50cm overlap between front and rear depending on whether the butterflies are telescoped out or pulled in.

This gives more margin for error when working across a bank than the old set, which had a simpler side-shift system.

The biggest irritation is that Kuhn didn’t offer an Isobus option at the time. It’s a pain, as we could be running section control rather than a small terminal in the cab, which would make life easier.

The same thing lets down the merger.

How have they performed?

We’re pleased with them – they’re easy to hitch on and set up, the ground clearance is good, plus maintenance and oil level checks are simple.

The best bit is the pull-type front mower with hydro-pneumatic Lift Control suspension, rather than springs.

We had a pull type before, but Kuhn tweaked the design and this new one follows the contours so much better.

They’ve gone to a single central ram, which offers more travel and gets the bed gliding over the ground.

We tend to set them at the absolute minimum working pressure, as we like to leave a high stubble – about level with the top of a work boot – to encourage quick regrowth.

It also means we don’t have to spend so much on wearing metal.

We’ve cut back on the amount of contract mowing we do, and the benefit of working predominantly in our own fields is that we can be sure they are properly rolled.

As a result, we go through hardly any of the quick-fit blades, so they get sharpened with the angle grinder once a month. 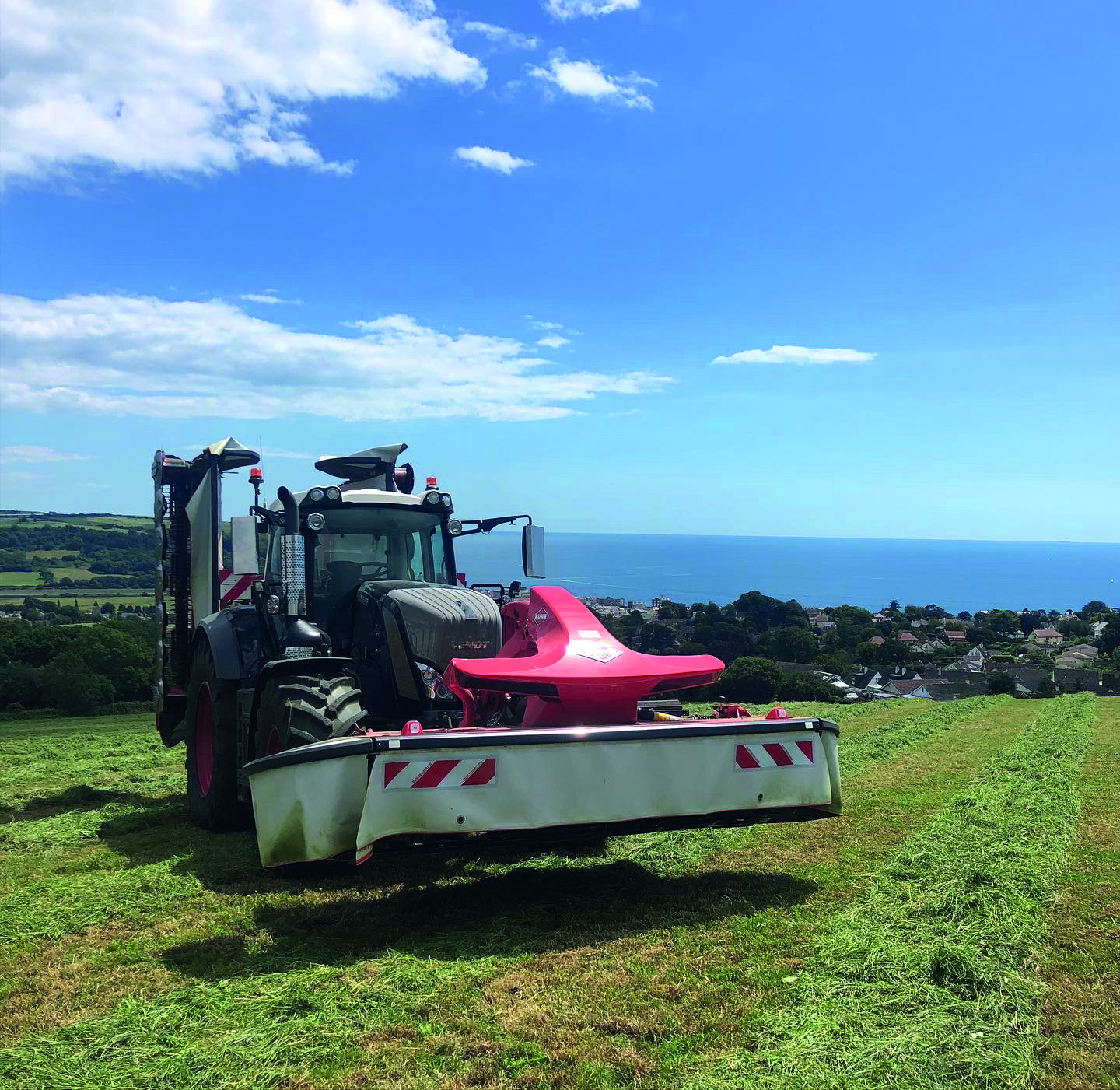 The mowers are also still on their original skids. They were specced with extra-wear plates on the outermost skids of each mower bed but, on reflection, we should have fitted them the whole way across.

We’ve just ordered a batch to fit before this season, as they’re only about £25 each, rather than the £100 Kuhn charges for the skid plates.

One improvement over the old set is the switch to a gearbox drive to run the steel tine conditioner, as we blew a couple of belts off the old ones – though that was pretty much the only problem we had with them.

We tend to run it at 1,000rpm on the grass and lower it to the 755rpm setting for the small acreage of lucerne that we cut.

The paint is awful. It peels and flakes on the sharp edges of all the panels and the metal goes rusty – so much so that we had some conditioner panels replaced under warranty after just eight or nine months.

It can’t have been a bad batch, as our previous butterfly mowers suffered the same. It’s strange, though, as the paintwork on the tedders, power harrows and ploughs has been good.

The front mower has been fine too, and neighbours with the John Deere version of these mowers haven’t had any problems.

One other gripe is the lights on the front mower – the rear ones are too low and catch the ground.

That said, we’ve not suffered from any mechanical problems, aside from one lift solenoid that was sorted by Beares.

These will most likely stay for five years, as we like to keep the kit modern and downtime to a minimum – which is why the tractors only do two or three years and the telehandlers are swapped annually.

We try to look after them, so they should be worth decent money when we come to trade them in. Second-hand value is king, so replacing them usually comes down to who will give the best deal for the old ones.

Next time, we’d definitely like to have Isobus and we’ll go a bit wider, most likely to 9.5m, as we have the tractor to handle them.

Food safety for smaller operations: Wearing all the food safety hats at once

Growers in the market for a versatile tillage tool now have another option from the Horsch stable, in the form of the Fortis AS. It features a combination...

Electric XP Kinetic to be most powerful Polaris Ranger UTV

The electric XP Kinetic Ranger is on course to be the most powerful model in the Polaris UTV range, but flaky battery supplies have held up its UK...

The Tillage-Live event returned to its triennial haunt of Dunbar, East Lothian, last month, giving farmers in the area the chance to see the latest drills and cultivators...

6 Simple Tips for a Safe Harvest This Fall

By Ben CovingtonSafety should be a major concern for all farmers during harvest, but as the season goes on, it can be easy to miss details or neglect...

FDA reveals cantaloupe was behind outbreak of Salmonella Typhimurium infections

The FDA has determined an outbreak of infections from Salmonella Typhimurium was from contaminated cantaloupe and declared its investigation over. ...