by agrifood
in Markets
Reading Time: 7 mins read
A A
0
Home Markets
Share on FacebookShare on Twitter


A Pembrokeshire beef farm has reduced its winter feed costs by £33/t by replacing a bought-in protein blend with home-grown beans and peas.

The Jones family grew 8ha of the crop at Pantyderi Farm, Boncath, as part of their project work as Farming Connect demonstration farmers.

This had been fed at a rate of 1-1.5kg a head a day, with grass silage and home-grown, urea-treated crimped barley in the growing and finishing rations of 400 head of cattle.

Eurig Jones, who farms with his father, Wyn, says it is an important step towards a goal of self-sufficiency in protein in the beef enterprise.

This was £33/t less than the concentrate blend – a feed based on rapeseed meal and maize distillers’ grains, which cost £275/t.

Not only is the mix cheaper, but Mr Richards points out that the cost is consistent year on year and is not dependent on the volatile protein market.

“The more feed a farm can produce itself, the less exposed it is to that volatility, and that resilience is repeated year after year,’’ says Mr Richards, of nutrition consultancy Rumenation.

“We are also now in a place where the environmental considerations for growing feed are equal to the economic ones.”

The Jones family considered growing single crops of beans or lupins, but thought yields could be improved significantly by bicropping beans and peas and crimping them.

This allowed for storage in an outside clamp, with the feed processed at harvest and ready for feeding out in the winter.

The crop favours free-draining soil and responds well to plentiful moisture, which made it a good match for the conditions at Pantyderi.

Farmyard manure was applied at 25t/ha (9t/acre), and there was no requirement for nitrogen inputs.

The growth habits of beans and peas are very complementary. The beans provide a strong scaffold, which helps keep the peas standing later in the season.

At Pantyderi, by cutting grass silage earlier from reseeded leys containing clover, the past two years’ harvests have analysed at 16.4% crude protein compared with 10.5% previously.

Beef farms tend to make more mature silage, favouring bulk over quality, but when silage analyses at 11-12% protein, other protein sources are needed to raise the level in the ration.

“There needs to be a greater focus on cutting silage younger and cutting from younger leys to get better-quality and higher-protein yields,” Hefin Richards suggests.

“Growing silage with 16.4% protein has had a big impact on how much protein is needed to balance the ration at Pantyderi.”

“Double cropping tends to synchronise any varietal differences with regard to time to maturity, and the peas fill the air gaps between the larger particle size of the beans in the clamp,” Dr Davies explains.

These seed rates were calculated using an app available through the Processors and Growers Research Organisation.

A fungicide was applied twice to tackle chocolate spot.

Mr Jones harvested the crop with his own combine, fitted with a side knife. “The side knife is a must, an essential bit of kit for the job,” he says.

Getting the timing right was a balance between having the crop dry enough to go through the combine and ensuring the moisture content was above 30% for crimping.

The crop yielded 42t from 8ha – an average of 5.25t/ha. It also produced 22 bales/ha of haulm, the fibrous part of the plants that is nutritionally superior to straw.

The rations formulated by Hefin Richards for growing and finishing cattle at Pantyderi show a cost benefit from including the mix of beans and peas and a marginal uplift in predicted liveweight gain.

This reflects the higher starch and energy content of the wholegrain peas and beans compared to a protein blend based on by-products.

But, with some milk and beef contracts now stipulating that soya must not be fed, Mr Richards says these figures must not be taken in isolation. Other benefits need to be factored in.

“There is a real benefit to a cereal crop that follows because soil fertility is lifted by the nitrogen-fixing characteristics of beans and peas.

“This combination crop is definitely worth consideration,” he says. 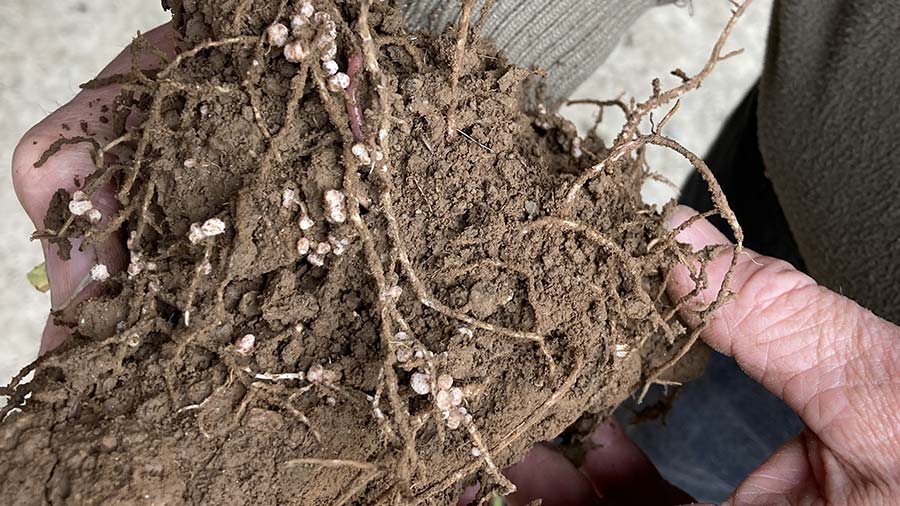 See a video of Eurig Jones combining and crimping peas and beans grown together. Video courtesy of David Lobley on YouTube.

Agricultural groups have issued support for the CREAATE Act and its purpose to support further development of export markets. The Cultivating Revitalization by Expanding American Agricultural Trade and...

Agronomy and distribution business ProCam doubled its pre-tax profits to £14m during 2021. The net operating margin – profit before tax as a percentage of sales – also...

USDA Funding for International Projects. That’s coming up on This Land of Ours. McGovern-Dole Food for Education ProgramCourtesy of USDA Foreign Agricultural Service The Department of Agriculture will...

Tenants have been given an assurance that their landlords cannot apply to Defra’s Lump Sum Exit Scheme, after reports that some new tenancy agreements have included clauses prohibiting...

Mzansi Meat on being a global foodtech with African roots

‘Small-scale fishers have a Ph.D. in the ocean’: Q&A with Vatosoa Rakotondrazafy