by agrifood
in Farming
Reading Time: 4 mins read
A A
0
Home Farming
Share on FacebookShare on Twitter


On the terraced hillsides of Liguria in Northern Italy, the fragrant scent of basil fills the air, much of it destined to be crushed in a mortar with olive oil, garlic, pine nuts, salt, parmesan and pecorino cheese to make traditional pesto Genovese. It’s little surprise that this leafy herb so entwined in the culinary heritage of the area has been chosen as the control plant for a pioneering project that can be found 50 meters off the coast of Noli, a fishing village an hour from the regional capital Genoa.

Called Nemo’s Garden, it is the world’s first—and only—underwater garden. Submerged at depths of up to 12 meters, a network of six domes, each home to around 60 seedbeds, sit on stilts anchored onto the ocean floor. This year marks a decade since the project was established by Ligurian scuba diving equipment manufacturer Ocean Reef Group, on the back of a casual conversation between company founder Sergio Gamberini and a farmer friend. “They spoke about connecting both of their worlds, agriculture and underwater technology,” says Luca Gamberini, Sergio’s son and Ocean Reef vice president of sales and marketing. Within a year, the first crop had sprouted. “We literally took a plant underwater and the seeds came right after that,” he says.

[RELATED: The Future of Ocean Farming]

Inside each biosphere, as the domes are called, approximately 20,000 liters of air sit trapped atop a body of surface water. “Light from the sun travels through the water outside the biospheres to reach the air inside it and heat it up,” Gamberini explains. In winter, when there’s less natural light, LEDs connected to the surface by a power line provide an additional source of light. The water outside keeps the temperature inside stable day and night, and evaporation and condensation inside the dome ensure a supply of freshwater for the plants. “What we’re doing is very basic,” Gamberini says. “We’re just doing it underwater, and with a bit more difficulty.”

Some important lessons have been learned along the way. “At the beginning, we used soil, but we quickly realized there were too many complications,” he says. As well as the logistics and costs involved in its transportation to the biospheres, soil brings an increased risk of introducing disease, insects or parasites into the domes. The switch was made to hydroponics, and the seeds are now planted inside a plastic cone containing a substrate (such as coconut coir or rockwool). The crops are fertilized with hydroponic fertilizer. 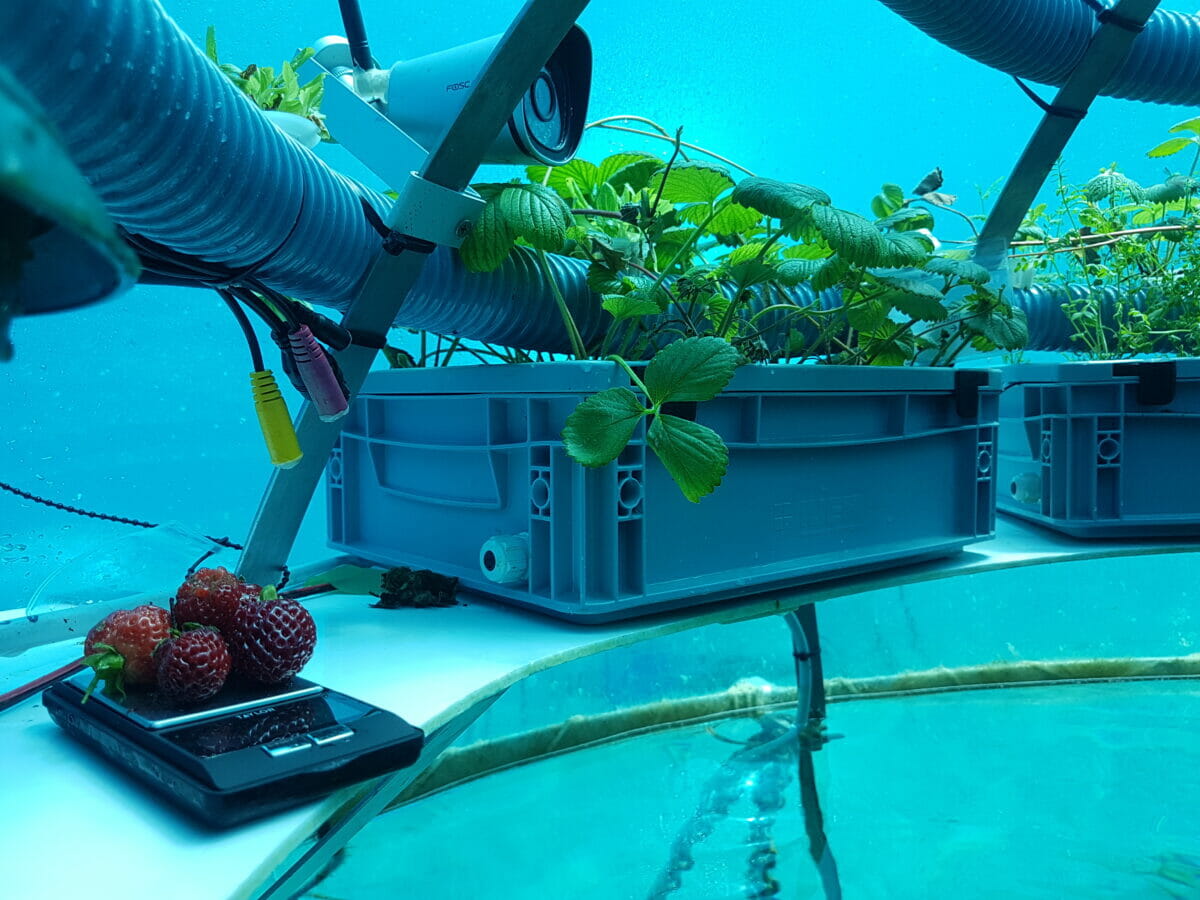 To date, more than 100 kinds of plants have taken root in this sunken garden: from medical and aromatic herbs to food such as salad greens, beans and strawberries. “We’ve succeeded with most, but there are always limitations,” Gamberini says. “It wouldn’t make sense to grow a tree or a grain, so that’s something we have discarded from the beginning.” And, in an inverse to the experience at altitude, the depths of the ocean enhance, rather than diminish, the taste. “If you take basil as an example, the flavor is much more concentrated,” he says.

Visible from the coastal boardwalk (and even faintly on Google Maps), the project has also become an unlikely tourist attraction. “We don’t restrict anyone visiting it, we only ask that people don’t enter the biospheres,” Gamberini says. While a local diving center provides gear and a guide for hire, the location is close enough to the shore for swimmers, stand-up paddle boarders and kayakers to access. “Visibility is great and free divers can easily reach the modules,” he says.

[RELATED: 8 Sea Vegetables You Can Cook With]

Gamberini says that they have no plans to make the Noli underwater site any larger, but now that the concept has proven to be successful, they have begun exporting the patented technology to other sites. Biospheres have already been installed in Belgium and the Florida Keys, with others in the pipeline. “Theoretically, the project considerably increases the percentage of the world’s surface that could be used for growing crops, especially in countries where environmental conditions make growing plants difficult,” he says.

From small beginnings, those involved in Nemo’s Garden are now dreaming big. The end game is to reach where they can drive down the cost of their produce as much as possible. “The price for our basil plants will never be comparable to what you pay in a supermarket. That being said, they come with a much reduced environmental footprint,” he says.

John Deere Planter Historical past: The place Did It All Start?

Liz Truss has pledged to slash red tape in the UK agriculture industry to allow farmers to spend more time producing food. The prime minister made the promise...

The green lobby are an excitable lot, aren’t they? I don’t know what they eat, but it’s given them a serious case of irritable growl syndrome. After a...

High food prices on American supermarket shelves are reflecting one of the biggest inflation surges in decades.  In fact, the prices of groceries this year have spiked to...

Climate change is one of the biggest challenges facing the UK today. The UK Government has set an ambition to be net zero by 2050, and many businesses...

Plans for a bespoke rural visa pilot scheme, to help secure sufficient migrant labour for farming and other businesses, have been presented by the Scottish parliament to Westminster....